A fire on Saturday burned an unpermitted single-story structure located mauka of the Honoapiʻilani Highway in Olowalu.

The incident was reported by a passing motorist at 11:41 a.m. on Saturday, Dec. 28, near mile post 16, about 200 yards on the mountain side of the highway, on land owned by West Maui Land Company.

No one was in the structure at the time of the incident, and no injuries were reported.

The fire was contained to the building of origin, and was brought under control in approximately 10 minutes, according to department reports.

The cause of the fire was undetermined, said Capt. Haʻake.

Lahaina fire crews from Engine 3, Ladder 3, and Tanker 3, responded to the scene, along with Engine 1 from Wailuku, fire officials said. 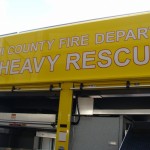