Surf is expected to build to 20 to 30 feet along the north facing shores of Maui and Molokaʻi today, according to an updated forecast issued by the National Weather Service.

The warning-level surf is expected to rise this morning, and remain elevated through tonight, before subsiding to 15 to 20 feet on Monday.

“An intense low pressure system, passing far northwest of the Islands several days ago, has generated a large northwest swell that will spread across Hawaiian waters through today. This swell will produce dangerous high surf along exposed north and west facing beaches of many islands,” the advisory said.

In addition to large hazardous surf on the north shores, Molokaʻi is also expected to get 18- to 22-foot waves on the west-facing shores.

Forecasters from the NWS say warning levels indicate that surf is dangerous for swimming, and deadly rip currents are expected with battering waves along the shoreline.

As a precaution, beach goers, swimmers and surfers are advised to exercise caution and heed the advise of Ocean Safety officials.  Authorities say breaking waves may also make navigating difficult at some harbor channels. 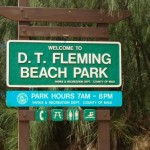