Enforcement officers with the Department of Land and Natural Resources today monitored the Ukumehame shoreline after a paddle surfer reported being approached by a tiger shark on Wednesday afternoon.

According to a DLNR spokesperson, a 43-year-old Haʻikū man identified as Matt Kinoshita told authorities that he was paddle surfing about 75 yards off Ukumehame in five feet of water at around 2 p.m. on Wednesday, Jan. 8, when he saw an eight-foot tiger shark approaching him from the side with its mouth open.

Kinoshita, who is the owner of Kazuma Surfboards, reportedly told DLNR officers that he turned his board toward the shark and ran over its back with the board during the incident.

Kinoshita reportedly lost sight of the shark and managed to stay on his board.

He reported the incident to lifeguards and contacted Ocean Resource officers.

“Maui Ocean Safety sent out a lifeguard on a jetski to monitor the waters, but there was no further sighting,” said Deborah Ward, with the Department of Land and Natural Resources.

A Division of Conservation and Resource Enforcement officer and another lifeguard monitored from shore and warned divers and surfers in the water, but the beach remained open following the incident and no warning signs were posted.

Authorities reported that water conditions were clear with one-foot waves. 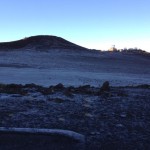 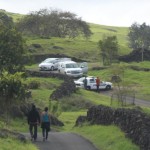