Fiji Indian Food: Worth Seeking Out 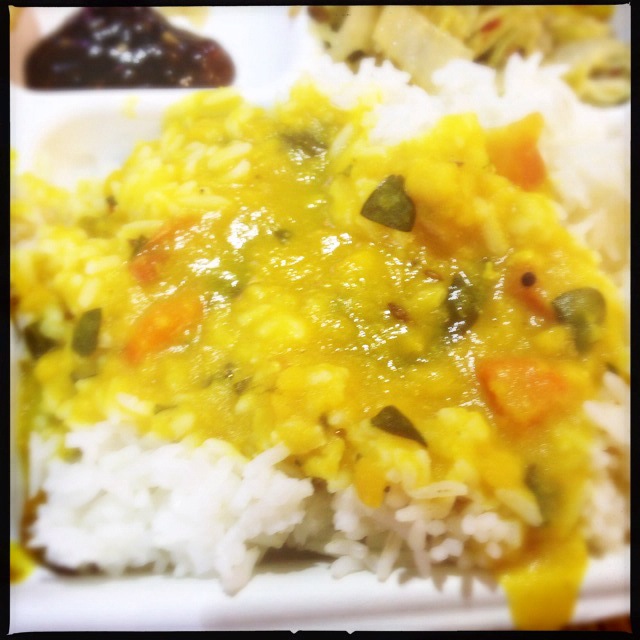 The Dhal. Even in the poshest of establishments, Indian food tends to photograph like a celebrity without makeup: badly. Photo by Vanessa Wolf

For most adults in today’s world, there are little to no “firsts” left to discover amidst a vast landscape of been there, done that.

This alone makes Fiji Indian Food in Wailuku such a treat.

The name baffled us at first: is this Fijian food or Indian food?

Turns out it’s both.

A solid 40% of Fiji’s population is of Indian heritage. Most are descended from indentured servants and laborers brought to the islands by Fiji’s British colonial rulers in the late 1800s to work on Fiji’s sugar cane plantations.

The resulting food is strongly influenced by, yet still unique from, Indian cuisine. 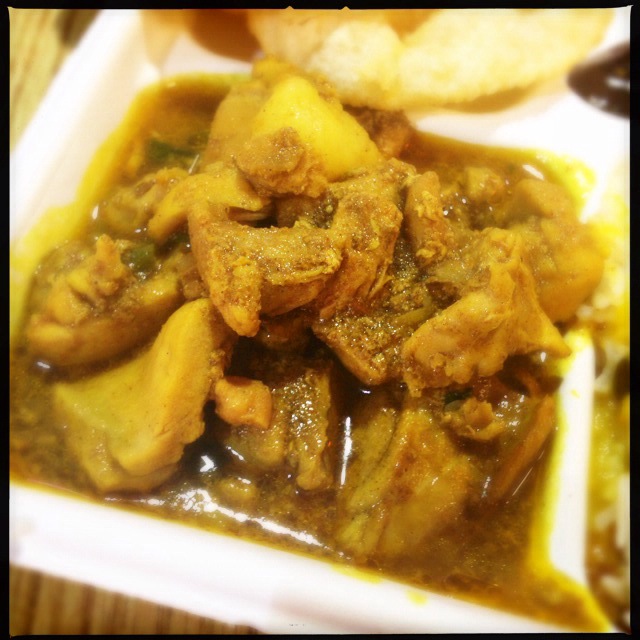 If you’re a fan of curries and similar flavor profiles, the novelty alone is worth the trip.

The Dhal (lentil soup, made with yellow lentils in this case) is simple with bits of carrot and zucchini and slight cumin and garlic flavors. It comes with every plate, every day.

Speaking of which, Chicken Curry is available daily with Lamb, Shrimp, Egg and Fish varieties served Tuesday through Friday, respectively.

The Chicken Curry ($10) is flavorful, with a touch of potato and a whole lotta bird. The savory, cumin-enhanced notes are replaced by a little heat at the end. 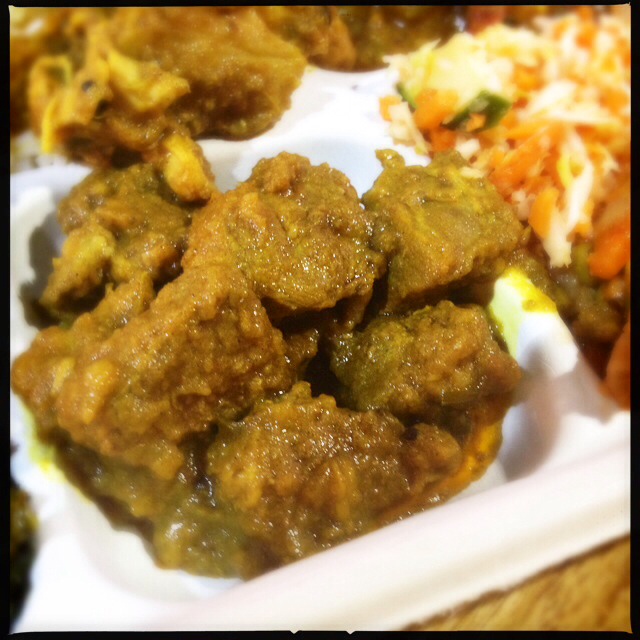 The Lamb Curry. And yes, we realize this does not exactly look appetizing, but didn’t your mother warn you that looks can be deceiving? Photo by Vanessa Wolf

The Lamb Curry ($12) is full of tender meat. Ours was a wee bit salty, but overall very much on par with what we’ve experienced with traditional Indian cuisine.

The Shrimp Curry ($12) was billed as a must-try and was our favorite of the three. Shell-on shrimp bathe in a slightly spicy, turmeric-rich sauce that’s milder than its Asian counterpart, but equally flavorful.

The meat and seafood-based curries are all reliable, but where things get interesting are with chef and owner Sarojini Harris’ vegan and vegetarian specials. You can choose two for $10. 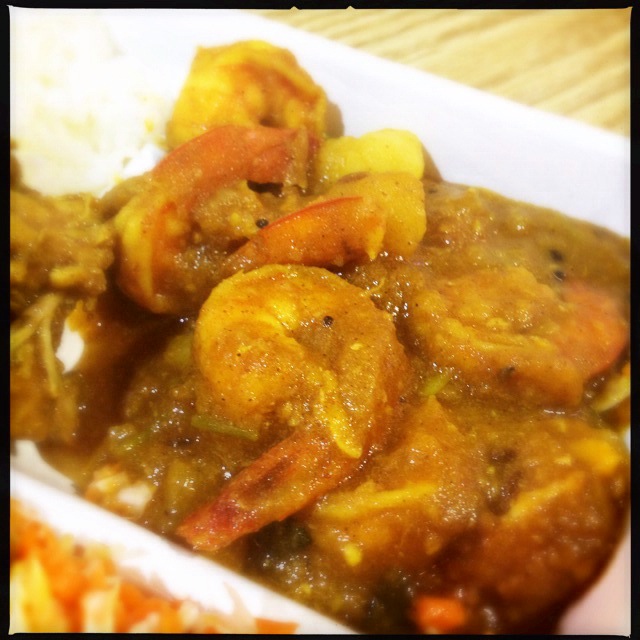 The Baigan Fry (sautéed eggplant in spices) reminded us of Chinese food in looks and texture. A touch oily (eggplant will do that to you if given the opportunity), the dish had strong cumin and coriander notes with a peppery kick.

The Aaloo Fry (potatoes sautéed in to turmeric and herbs) was replete with the flavors of ginger, cumin, coriander, chili, and a bright punch of coriander. It was our runaway favorite – including the curries – for its complex yet comforting balance.

The Tamarind Chutney was equally delightful. There isn’t enough tamarind used in… anything… and we always love it when we find it. 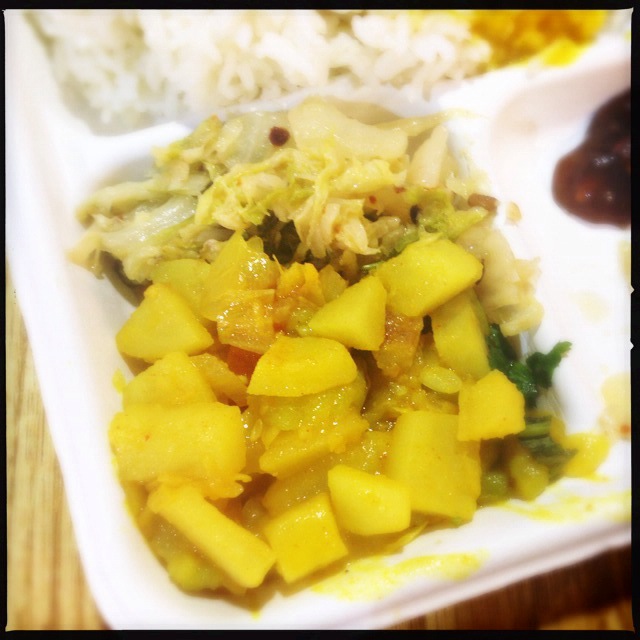 The Aaloo Fry was the slam dunk favorite. Photo by Vanessa Wolf

We also tried a few “mystery dishes” that didn’t seem to be detailed on the menu listening or assigned a recognizable (to us) name.

A shredded cabbage offering with a notable cumin flavor tasted mildly fermented. Kimchi’s Fijian/Indian cousin, we’d never had anything quite like it.

There was also what seemed to be finely diced collard or another bitter green. Armed with a light peppery heat, it reminded us of the (probable) flavor and texture of a sautéed bag of lawn mower clippings but hey, different strokes. Points for being a novelty anyway. 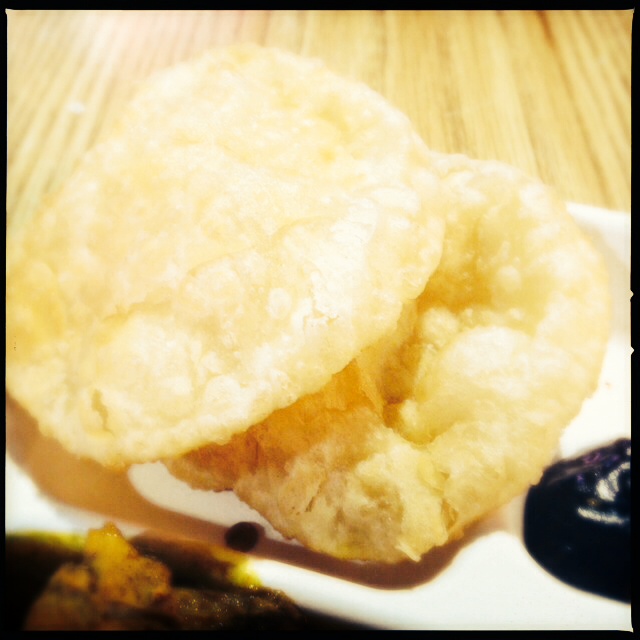 The deep-fried Puri and Tamarind Chutney.  Photo by Vanessa Wolf

All curry plates come with white or brown rice and we found both options to be unbearably, baby food mushy. Maybe this is the preferred Fijian preparation, but we’d vote for (a lot) less water/cook time if anyone wants to know.

On the upside, all plates also come with one of three homemade breads. The cheerful and friendly Harris bakes the fresh Roti, Puri and Chapatti herself. (No naan, she explained, as she lacks the necessary oven.)

The Puri is deep fried and reminiscent of (Native American) Indian fry bread or the wrapping on a flauta.

The homemade Chapatti is clearly a labor of love. Made with whole wheat, the square tortilla-like bread provides a delicate balance to the curry flavors. 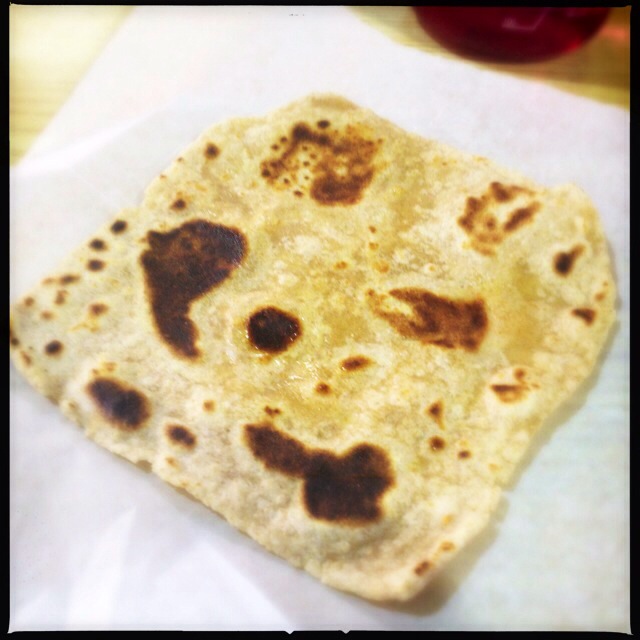 The Chapatti is pretty as Christmas. Photo by Vanessa Wolf

The Roti – a white flour-based brother from another mother to the Chapati – is also hand-crafted and an excellent foil to the curries.

Fiji Indian Food is located inside the Main Street Promenade in Wailuku. Don’t get too excited: the name is the most glamorous part.

The ambiance inside the three-story office building is lacking: think mall food court sans even a hint of pizzazz.

There are about eight tables available for dining at Fiji Indian and its neighbors – J N J Catering and Fast Food and T-ann-J Authentic Ramen (it’s almost as if everyone was limited to a naming scheme involving the letter J) – and that’s about it.

Still, you didn’t come there for the atmosphere, so suck it up and enjoy Harris’ curry in the stoic surroundings or take it to go.

Either way, you’ll be glad you did.

Fiji Indian Food is located at 2050 Main Street in Wailuku and is open 10 a.m. to 7 p.m. Monday through Friday, as near as we could tell. 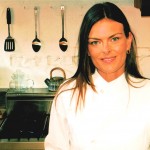 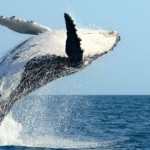