A fire late Thursday night caused an estimated $450,000 in damage to a two-story home in North Kīhei and displaced a mother and daughter who were at home at the time of the incident.

Firefighters responded to the alarm at 11:20 p.m. on Thursday, Feb. 13, 2014, for a structure fire located at 282 Kaipiʻi Place, to find the bottom unit of the home fully engulfed with flames extending to the top floor, fire officials said.

In addition to the occupants of the home, individuals in neighboring homes were also evacuated.

According to Department reports, there were no injuries reported and the residents of the home indicated that they would be staying with neighbors.

Crews responding to the scene included Engine-6 from Kīhei, Engine-14 and Ladder-14 from Wailea, and Battalion Chief-1.

Department officials say the fire was extinguished by 2 a.m. on Friday, Feb. 14, and the cause of the fire remains under investigation. 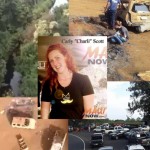