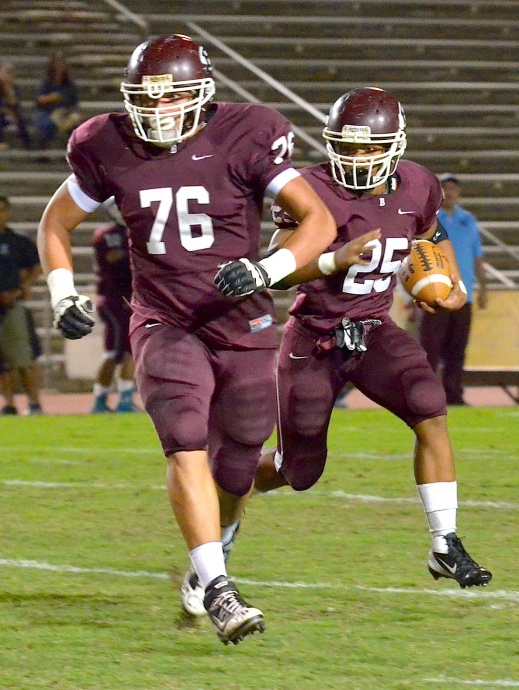 Baldwin offensive lineman Miki Fifita (76) blocks for running back Keenan Luis (25) during the Bears final game of the 2013 season against Farrington at War Memorial Stadium. Photo by Rodney S. Yap.

The first-team Maui Interscholastic League all-star is currently a junior with a 3.3 grade-point average. At 6 foot 5, 280 pounds, Fifita is sure to get more offers in the coming months.

“I got my first offer from Oregon State last week. My cousin plays there so that’s a big offer for me,” Fifita told Hopkins. “I don’t have any favorites, I’m definitely interested in Oregon State but I’m interested in anyone that wants to pay for my college education.”

Oregon, Colorado and Arizona State are the other schools showing interest in Fifita.

Scout.com is reporting Punahou defensive end Canton Kaumatule (6-6, 259) is Hawaii’s top recruit from the 2015 class. Nine schools are interested in Kaumatule, including Stanford, USC and Mississippi.

Meanwhile, Baldwin senior Teva Eldridge received a official walk-on invitation from Hawaii head coach Norm Chow following the Bears’ state basketball appearance. Eldridge is considering the offer, which would reunite him with former teammates Keelan Ewaliko, a red-shirt last season and place-kicker Ceejay Santos, who sat out the 2013 Warrior season after one season at Weber State. 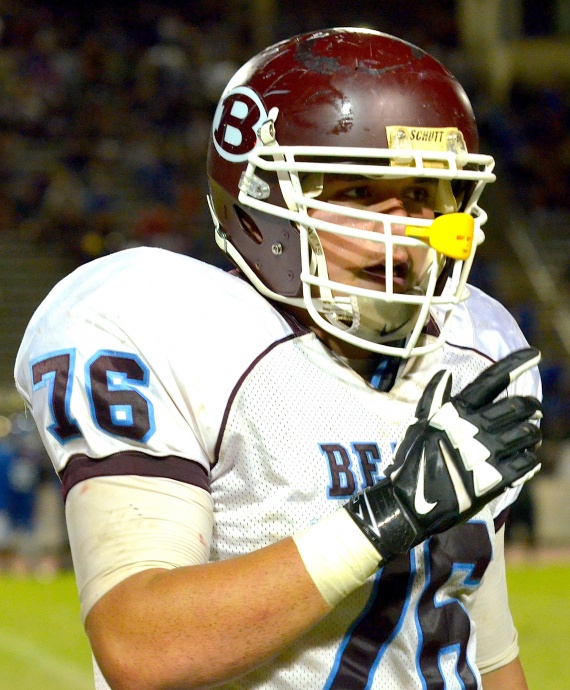 Lahainaluna defensive end Hercules Mata’afa is the MIL’s top college football recruit from the current class of 2014. He signed a letter of intent to play at Washington State on Feb. 2.

Mata’afa (6-3, 225) was recruited by as many as eight schools with four — Washington State, New Mexico State, Oregon State and San Diego State — making official offers. Hawaii, USC, Washington and Wisconsin were the other interested schools.

According to 247 Sports, Mata’afa was primarily recruited by Cougars’ coach Joe Salave’a.

Before Mata’afa, Baldwin linebacker Jordan Hoiem (6-4, 210) was the most recruited football prospect from the MIL and the first underclassmen to be offered a scholarship. In fact, Hoiem received five official offers, beginning with Hawaii following his sophomore season. Utah, Utah State, UNLV and Oregon soon followed and Hoiem made a verbal commitment to the Ducks on March 12, the same day he received the offer.

Eight months later, during the summer of his senior-season-to-be, Hoiem de-committed because of his dislike for the sport. He quit football before the start of the season, saying to one source: “I quit football because I didn’t love it. I just had no fun. I just know football doesn’t make me happy.” 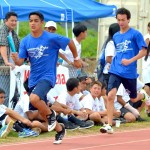 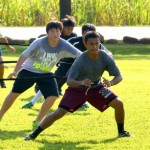