By Dave Smith / via our team at Big Island Now 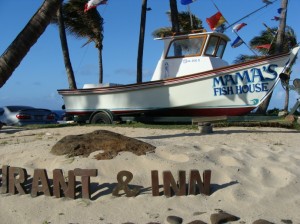 Mama’s Fish House in Pāʻia — the accident happened when a vehicle traveling on Hana Highway collided with a vehicle pulling into the restaurant. File photo by Wendy Osher.

Gov. Neil Abercrombie last week signed into law a bill which appropriates more than $2.9 million to settle 32 legal claims against the state.

Some of the appropriations are paying for judgments by juries or judges against the state, while others are in lieu of going to trial.

The law’s largest appropriation, $700,000, stems from a lawsuit filed in Maui’s Second Circuit Court over a collision between two vehicles on the Hana Highway.

It was filed by the family of a man who suffered brain damage after colliding with a vehicle making a left turn into Mama’s Fish House Restaurant in January 2010.

The plaintiff’s attorney maintained that the state was at fault because a curve in the highway and overgrown vegetation on an embankment resulted in inadequate sight distance for the driver turning into the restaurant.

According to state attorneys, experts for the state argued that the highway had adequate design criteria. However, according to testimony submitted to the Legislature from the attorney general’s office, experts for both sides agreed that the plaintiff was not at fault.

The lawsuit was filed against the man turning into the restaurant, but state attorneys were concerned that a judge could find that the state was also liable.

Under those circumstances, the state attorney general advised settling the case because if the case had gone to trial the judge could have awarded “substantial” general damages as well as funds to pay for the 24-hour medical care the plaintiff now requires.

The law also covers a $70,272 judgment against the state in a lawsuit filed by the Honolulu Star-Advertiser compelling the governor to disclose the names of nominees selected by the Judicial Selection Commission that resulted in the 2011 appointment of Hawaii Supreme Court Justice Sabrina McKenna.

The commission changed its rules and now releases the names of its nominees.

Other significant payouts include:

The addition of new cases increased the appropriations more than six-fold since the bill was first taken up in January. At that time, the state attorney general had recommended payouts on nine lawsuits and other claims pending against the state at a cost of $683,000.

The payouts were included in Senate Bill 2246, which became Act 80 with the governor’s signature on May 13. 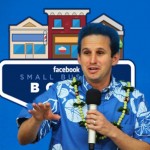 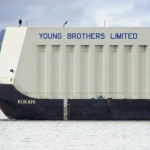