New details have emerged in an investigation involving a Maui officer who was placed on leave earlier this month after being arrested and released for alleged theft.

Police say Anthony Maldonaldo, 26, was placed under arrest again, this time for allegations of bribery of a witness and first degree hindering prosecution.

The arrest was made on Thursday, Oct. 15 at around 8:51 a.m.  Police say Maldonado was released pending further investigation and placed on administrative leave without pay.

Another individual, Damien K. Kaina Jr., 36, from Wailuku, was also arrested and charged with the same alleged offenses of bribery of a witness and first degree hindering prosecution.  He was released after posting $10,000 bail.

According to police reports, Kaina visited an individual identified as the victim of a second degree theft case involving Maui police officer Maldonado, at his residence on Tuesday, Oct. 13, 2015.  Police say Kaina allegedly offered an undisclosed amount of cash to the victim in exchange for a withdrawal of the criminal complaint against Maldonado.

The victim reported the incident to police on Wednesday, Oct. 14, 2015, and turned over the cash allegedly given to him by Kaina.

Maldonado has been a sworn officer with the Maui Police Department with just under five years of service.  He graduated with the 74th Recruit Class and was honored with the Outstanding Recruit Award, given to the recruit who presents the most consistent achievement in training, leadership, judgement, attitude and service to others. 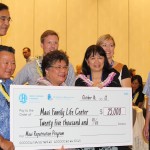 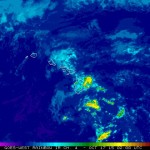