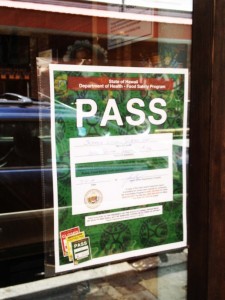 The Hawaiʻi State Department of Health Sanitation Branch recently completed inspections of virtually all of Hawaiʻi’s more than 10,000 food establishments to ensure they are in compliance with the rules of the state’s food safety code.

The department launched inspections of food establishments with a color-coded placard system in July 2014.

“Consumers now look for the green placards posted as validation that their favorite eating spots are protected from food borne illnesses and other health hazards,” said Peter Oshiro in a department press release, who oversees the Hawaiʻi Department of Health’s inspection program. “The good news is that the majority of Hawaiʻi’s establishments are in compliance with the state’s food safety code.”

Under the inspection system, color coded placards are issued based on compliance and include:

Of all the establishments that were inspected since the program began, the Hawaiʻi Department of Health has issued only three red placards with monetary fines – all on Oʻahu – that required the suspension of their permit and were ordered to temporarily close their operations.

“There has been a voluntary compliance rate of over 99.8% for those food facilities that were issued a yellow placard. This confirms that the placarding program has been a huge success in terms of influencing rapid and voluntary correction of food safety violations,” Oshiro said.

“The Department of Health has long recognized that litigating solutions through permit suspensions and the levying of fines is counter-productive and time consuming when compared with voluntary compliance, which is truly a win-win-win outcome for the regulatory agency, the food facilities, and most importantly public health, by reducing the public’s exposure to food illness risk factors,” Oshiro added.

Oshiro said there may be some mobile food service establishments or others that have not yet been inspected. If the public does not see a placard at an eatery, they are encouraged to inform the Hawaiʻi Department of Health (by calling 586-8000) so that an inspection can be scheduled at that site.

In addition to the in store placards, an online portal that will allow the public to access the inspection results is targeted to be operational in the first quarter of 2016. The system, which also allows food establishments to apply and pay for permits, is also scheduled to be ready in the new year. 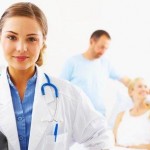 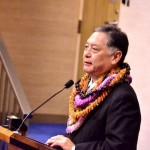