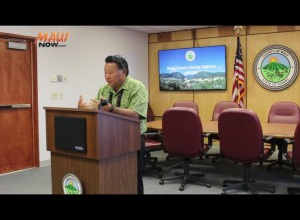 The mayor began by explaining the reason for today’s press conference.

“Maui County is trying to get into alternative energies for a number of years now and has really pushed hard to expand alternative energy as much as possible, because the cost of energy here in Hawai’i is extremely high,” the mayor said. “The public here has never been given a very clear reason as to why everything is so high.”

The mayor said the county commissioned Guernsey, an engineering and architecture consulting company, to develop a comprehensive utilities report for the county.

“The press conference today is because the Guernsey report is a first step and we’re about to embark on the second step of our journey,” the mayor said. “That is to find out more information about the utilities, identify what kind of utility model would be the best for our county and our community and figure out what we need to do in order to make the models work for us; to come up with something that will work the best for our community.

“We have to first take into consideration that there are some laws at the state level that we may have to work with and change,” the mayor continued. “Secondly, we will have to present the finding in the Guernsey report so the public can understand what the report finding are… what the animal is and what the challenges are.”

Now that we have the Guernsey report, the mayor said the county will be hiring two new employees. One will be an internal position—the energy “czar,” a commissioner who will be able utilize the report and make it usable for the county.

The county announced that the search for the now-vacant position of county energy commissioner will open Jan. 20 via the Office of Economic Development. Details will be posted on the county website.

“We are also going to have someone who can do the research,” the mayor said. The position was later identified as a utility consultant, a position that will go out to bid.

Mayor Arakawa confirmed he would be adding $2 million to this year’s Maui County Fiscal Year 2017 Budget Proposal to hire a consultant who could take the county through the next steps of the utilities process.

“All of these things are going to get us much much closer to what we have to do as a community to get us in the best possible position,” said the mayor. “For far too long, we’ve been at the mercy of foreign oil. Prices have gone up and down at their discretion, and the population here has been paying almost three times more on an average than the rest of the United States.”

So now were going to to try to meet the goal of 100% self-sufficiency, the mayor said, and the county is taking these step to accomplish this goal.

The state of Hawai‘i has put in place an aggressive energy goal: 100% renewable energy by 2045, with a requirement for 40% of “net electricity sales” to be from renewable sources by 2030. The Hawaii Clean Energy Initiative extended the initial program, adding a 30% avoided energy consumption requirement through energy efficiency measures, for a combined 70% “clean energy” goal by 2030.

Although significant progress has been made in Maui County, the Guernsey report stated that “current system renewable generation, as configured and managed by MECO, is limited and reaching a plateau.”

Among other issues, the report also said “MECO was slow to respond to or properly anticipate and integrate the significant wind energy harnessed from Maui Island’s two large-scale farms.”

The report goes on to say that “without significant investment to reconfigure the transmission and distribution system, it does not appear likely” that MECO can meet the goals laid out by the state.

Guernsey’s entire 35-page “Analysis of Alternative Forms of Ownership and Alternative Business Models for Maui County’s Electric Utility Company” was made available at the meeting.

Maui County Office of Economic Development Director Teena Rasmussen said Guernsey was chosen to do a high-level high, picture-study for the County of Maui because an evaluation team was impressed with Guernsey’s depth of experience and with the diverse projects that they have consulted on. Also a major factor in the contract award to Guernsey was their work in Hawai‘i with the Department of Defense electric utilities here and with multiple municipal utility cooperative clients across the United States. She said they understand the unique challenges and requirements of electric utilities in the Hawaiian Islands.

“We know from multiple engagements in our community that our citizens want reliable power, affordable power, and they want us to try to achieve those two things with clean energy technologies,” said Rasmussen. “This administration and our community knows that the energy industry is changing rapidly and innovation is an must continue to take place keeping all of this in mind.”

“Guernsey was tasked with finding the path that could take our county to a much more transparent full energy future that would allow for new technologies as they are developed,” said Rasmussen, who then summarized Guernsey’s findings.

Guernsey’s report outlines the “ideal path forward” to meet the county’s objectives. The report recommends that the county organize, develop and enable a private entity, such as an independent system operator or regional transmission operator, to oversee the electric grid and energy market, “while ensuring a reliable power supply, adequate transmission infrastructure, competitive wholesale prices and fair access for renewable power.

The report states that if the independent system operator or regional transmission operator approach is not acceptable or cannot be accomplished, then “the most technically advantageous route to enhanced renewables integration must include a change of ownership of some or all of MECO’s existing assets.”

The two primary alternatives for third-party ownership are cooperative or municipal, the report stated. Guernsey believes the the cooperative model is the most practical choice.

Both Kaua‘i and Hawai‘i Island have electric cooperatives.

Kaua‘i Island Utility Cooperative, formed in 1999 out of the assets of Kauai Electric Company, is the only Hawaiian Electric Cooperative that owns and operates assets. The Hawaii Island Energy Cooperative was formed in 2014 in anticipation of the potential to provide energy services on the Big Island.

The conference also included an by announcement by County Managing Director Keith Regan about a proposed change to state law, which will affect all four counties regarding powers of eminent domain and how it relates to Maui County’s efforts.

The proposed amendment would add “including for the purpose of acquiring of any property necessary to operate an electric utility for the production, conveyance, transmission, delivery, or furnishing of electric power.”

“As you can see, this language does not grant the counties or state any additional powers, but it does make a clear reference to utilities,” said Regan. “Please note that introducing this language does not mean that Maui County or any of the other counties intend to use it. This is just another tool in our toolbox.  We hope to gain more support from our allies in the state, our sister counties and our community at large as word gets out about our efforts.”

He went on to thank Sen. Sen. State Sen. Gil Keith Agaron for introducing and endorsing this amendment for the state legislature.

In summary, the mayor said, “There’s always a bottom line for a private utility. Their decisions are influenced by making a profit, whereas an ISO’s [independent system operator’s] only duty is being fair to the consumers and making sure our electrical grid is reliable and efficient, as well as renewable friendly.

“This community is more than ready for an electrical utility model where they—the ratepayer—is the bottom line,” the mayor concluded.

The press conference concluded with a question-and-answer session with representatives from Guernsey. An additional story covering this session will be published on Monday, Jan. 18. 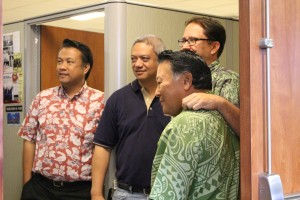 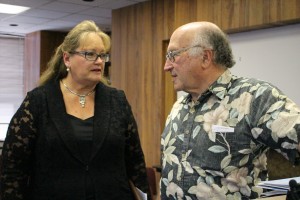 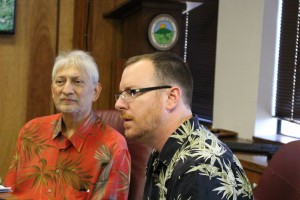 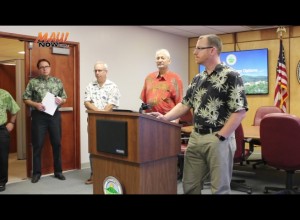 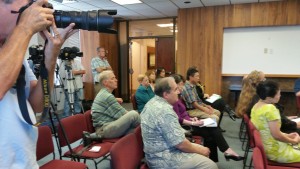 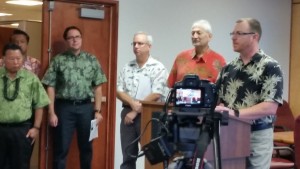 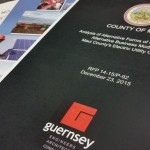 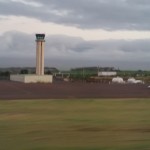