At 11:56 a.m., while Nāpili firefighters were conducting ocean training activities at Kapalua Bay, they noticed two snorkelers about 70 yards out trying to swim towards shore but not making any progress against the current. As firefighters were swimming out to check on them, an ocean activities employee paddled out on a standup paddle board and brought a female back to shore. Firefighters assisted the other male snorkeler back to shore. The tourist couple in their 40’s, were caught in a rip current caused by the rising surf. Although a little exhausted, both did not require medical attention.

At 11:58 a.m., Lahaina firefighters were called to Kahekili Beach Park in Kāʻanapali for two female standup paddlers waving their paddles in distress. Before fire and ocean safety personnel arrived, a beachgoer helped them to shore. The paddlers were having trouble making it to shore through the large shorebreak caused by the rising surf. The paddlers left the area before emergency crews arrived.

At 12:47 p.m., the Nāpili fire crew and ocean safety from DT Fleming Beach were called for a female bodyboarder caught in the rip current at Nāpili Bay. Ocean safety personnel on rescue watercraft found the female visitor from Seattle, about 200 yards out and brought her to shore. She too was caught in the northwest swell that rose rapidly since mid-morning. No medical attention was needed.

At 2:41 p.m., ocean safety personnel at DT Fleming Beach assisted a surfer and bodyboarder to shore because of strong rip currents preventing them from getting back to the beach. Both were West Maui residents and did not need medical attention. 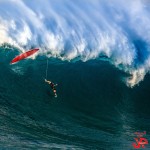 PHOTOS: It was a Big Wednesday at Pe'ahi