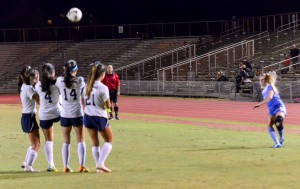 If it was a golf shot, it would have been a hole-in-one.

Talk about clutch. The center-halfback from Baldwin High School delivered the season’s biggest goal in Maui Interscholastic League girls Division I soccer in the 78th minute of the Bears’ 80-minute match against Kamehameha Maui.

The 1-0 victory clinched the Bears second MIL championship in a row. Baldwin finishes the MIL season 9-1-0, its only loss coming at Kamehameha Maui earlier this season. 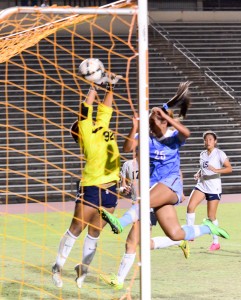 The runner-up Warriors (7-2-1) will also be at the state tournament.

As league champions, the Bears will draw a bye in the state tournament, scheduled for Feb. 17-20 at Waipio Peninsula Soccer Complex on Oahu.

“When I saw it go in it was the best feeling in the world,” Littlefield said. “I can’t even describe it — I wanted to break down and cry. As soon as I kicked it, I thought that it was going in. I felt like I hit it perfectly and as soon as it went in I was so happy.

“I’ve been practicing free kicks all season with my team,” she the Lady Bears’ junior. “And I haven’t been making them. It’s been going off frame, so I have been working on it to be on frame and my coaches have been getting on me for it to be on frame. All I was thinking about when I lined up was, ‘Please, just let it be on frame. Please make it go in the goal.’ “

Littlefield’s high-arcing shot sailed over the out-stretched hands of Kamehameha Maui goalkeeper Makamae Aquino — like a wedge shot finding the back of the cup in flight. Aquino tried to time her jump in hopes of re-directing the ball over the crossbar — and to her credit did everything possible to prevent the score — only to watch the ball sail over her gloves in a blur. 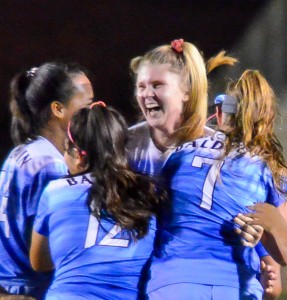 Baldwin’s Skylar Littlefield is mobbed by her teammates Friday after scoring the game’s only goal in the 78th minute. Photo by Rodney S. Yap.

“We’ve been working on that, on her free kicks for the past few weeks,” said Baldwin head coach Tia Medeiros. “She’s been wanting one so bad. She fought through this game and she finally had her chance and she put it away.”

“It was a battle, but we expected it though,” said Kamehameha coach Jayson Nakasone. “We didn’t expect anything less than that. It just didn’t bounce our way in the end. That was a great shot by Skylar, she teed it up real nice, so, oh well.”

The Warriors had to win the match to claim their third MIL title in the last four seasons. 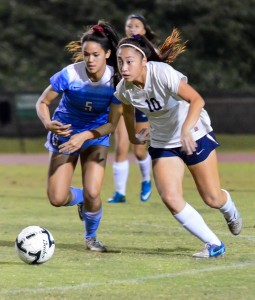 The Warriors missed on opportunities by Kennedy-Kainoa Tamashiro in the 79th minute, Quinn Williams in the 51st minute and Medeiros in the 58th minute.

“A tie wouldn’t have been good enough for us, we wanted to win this one,” said Coach Medeiros. “It wasn’t our prettiest game, but they fought all the way to the end and ended up getting that goal.” 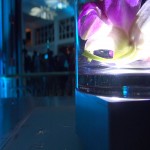 James Beard Celebrity Chefs Get a Taste of Maui 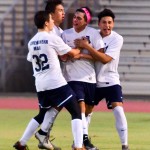