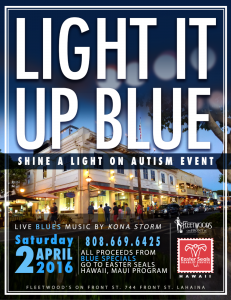 Fleetwood’s Light it Up Blue event to support autism awareness on April 2.

Fleetwood’s on Front Street is taking part in a worldwide movement on Saturday, April 2, a day you’ll see people around the globe wearing blue to “shine a light on autism.”  The Lahaina restaurant invites you to help “Light It Up Blue” to raise awareness about autism.

In 2015, more than 10,000 buildings were lit up blue to support the cause, and this year, Fleetwood’s says it proudly plans to do the same.

Teaming up with Easter Seals Hawai‘i, Fleetwood’s will recognize Worldwide Autism Awareness Day on April 2 with a rooftop concert. Following the sunset ceremony with bagpiper Roger, Kona Storm will play live blues music between 7 and 10 p.m.

There will be blue specials, like t-shirts, drinks and desserts; all proceeds from those items go to Easter Seals Hawai‘i. 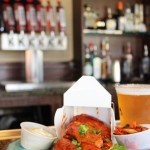 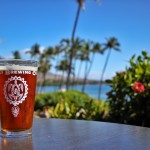 Taste the Flavors of Maui at Special Japengo Dinner