At Home in Hoʻokipa: Up Close with Maui Surfer Ian Walsh

Growing up on the North Shore of Maui, Ian Walsh has perfected his skills at some of the worlds most treacherous waves. Ian grew up surfing in local amateur events around the Valley Isle and learned from an early age that he had a desire to surf the biggest waves he could find. He quickly graduated from amateur events to the big leagues as a professional surfer competing in events like the Pipe Masters and the recently held Peʻahi Challenge.

Ian has been a professional surfing standout for several years now and still calls Maui his place of residence. He loves to acknowledge where he honed his skills and has a strong appreciation for the community which helped him succeed in his life long goals. He is a very strong advocate for giving back. For the past 11 years, Ian has hosted a free surfing event – The Menehune Mayhem – at his local beach of Hoʻokipa which will take place this upcoming weekend on April 2nd.  It is a free event and he encourages everyone to come by and enjoy a day of fun community interaction with live music, free food, and various activities for the keiki.

Maui Now recently caught up with Ian after an exciting winter run of events including his recent win in the HIC Pro at Sunset Beach, along with some powerful performances in the Triple Crown of Surfing, Peʻahi Challenge and The Eddie Aikau Big Wave event.

Where did you first learn to surf?

I started surfing at Hoʻokipa with my brothers. Our dad taught us when I was nine years old and as soon as I caught my first wave, I knew there was nothing else I wanted to do. I would stay in the water from sun up to sun down every day that I could. Then my parents relocated from Makawao to Kūʻau, where we were only a few minutes from the surf at Hoʻokipa. This is when I started surfing everyday before and after school.

When did you realize that you wanted to be a professional surfer?

Once I started surfing I was drawn into the sport instantly. My dad was an avid surfer so there were always surf magazines laying around when I was young. I became a fan of the pros and quickly had surf posters on my wall and my VCR was always replaying the newest surf movie. I probably didn’t realize that becoming a professional surfer was a realistic goal until I was about 15 or 16 when I started traveling to the NSSA Nationals and saw how my talent could match up against some of the nations best kids.

Who inspired you when you were growing up in the amateur ranks?

I always looked up to the Hawaiian pros like the Irons Brothers (Andy and Bruce) and Shane Dorian. I loved how they could really handle themselves in large surf and also surf at a high level when the waves got small.

How have the waves around Maui helped you craft your skills?

Growing up on Maui we have a great mixture of fun playful surf and then some very heavy surf. Just like most of the Hawaiian islands, Maui gives you a good variety of all kinds of waves and conditions. It’s a great place to get in the water any day of the year.

What makes living on Maui as a surfer so special?

I feel like Maui is the perfect place to live as a surfer. Although it is often super windy, there is always somewhere fun to surf. Especially as a kid, bouncing around from Hoʻokipa, Hāna and Lahaina, there is no shortage of fun little waves that are perfect for the groms. Then when you get older you realize all the potential that Maui’s outer reefs have. My first experience in really big waves was when I ventured out to the outside reefs of Sprecklesville. I was 15 years old and Matt Kinoshita (Kazuma Surfboards) took me out there with him. It was a really big day and the first time I got to experience riding a larger surfboard to catch bigger waves.

What is your favorite wave?

My favorite wave is “Jaws.” I can’t really compare this wave to anything else I have ever seen or surfed. It is without a doubt the best big wave in the world and it is a pleasure having it located on Maui’s north shore.

When did you first surf “Jaws?”

I first surfed “Jaws” when I was about 17, my neighbors were professional windsurfers and they had been surfing out there several times. I was already learning to tow surf and use Jet Ski assistance at other outer reefs around Maui. Then one day my neighbor came over in the morning and asked if I would like to go out to “Jaws” with him on his Jet Ski. After that day I never looked back, the wave was so different compared to anything else I had seen or surfed before.

How does “Jaws” compare to other big waves around the world?

“Jaws” has a different dynamic than other waves around the world. No other big wave can barrel like “Jaws.” That is probably one of the most exciting things about it, it is one of the biggest waves in the world, but also one of the most perfectly shaped big waves. It has a very steep drop and moves incredibly fast. That is why it was deemed too big to paddle into in the past – the wave moves so fast that you need the right equipment in order to paddle into the monster waves.

You’ve recently competed in the first ever WSL Peʻahi Challenge. What did you think of this historic event?

I thought it was a great event and it definitely set the bar for big wave surfing competition. Some of the rides that were ridden that day broke the records for some of the biggest paddle in waves and also some of the most dramatic wipe-outs. I was really impressed by all the surfers in the event. It was a fun experience because one of my younger brothers was also competing in the event and he was charging. I love it when my younger brothers try to out do me in large surf. It makes me want to push my limits even more.

For the past 11 years you have put on a free surfing event for the youth on Maui–Ian Walsh’s Menehune Mayhem. What does this event mean to you?

This event means a lot to me because the Maui community has given me so much as a professional surfer. I grew up surfing these coastlines and it is a great feeling to give the Maui youth an event to look forward to. It is a free event and every competitor walks away with a huge backpack of prizes no matter what place they finish in. It has taken on a life of its own and is out growing the basic concepts of an amateur surfing event. We have live music, learning centers, games, entertainment, food and of course great surf. The event will be held this weekend on April 2nd  and it is a fun day for the whole community to come and share the love of surfing as a Maui ʻohana.

What do you think of Maui’s future surfing stars?

Maui has some very incredible rising talent. I have seen kids that graduated from the Menehune Mayhem into junior pros and are now competing on the world stage. Maui has world class waves and world class surfers… the youth just keep getting better and better. It is very exciting to see and I love to watch local Maui groms excel within the sport.

What are your future goals for the rest of 2016?

I am currently working on a feature film and most of my 2016 year will be designated towards filming for that as well as competing in a few select Hawaiʻi events. 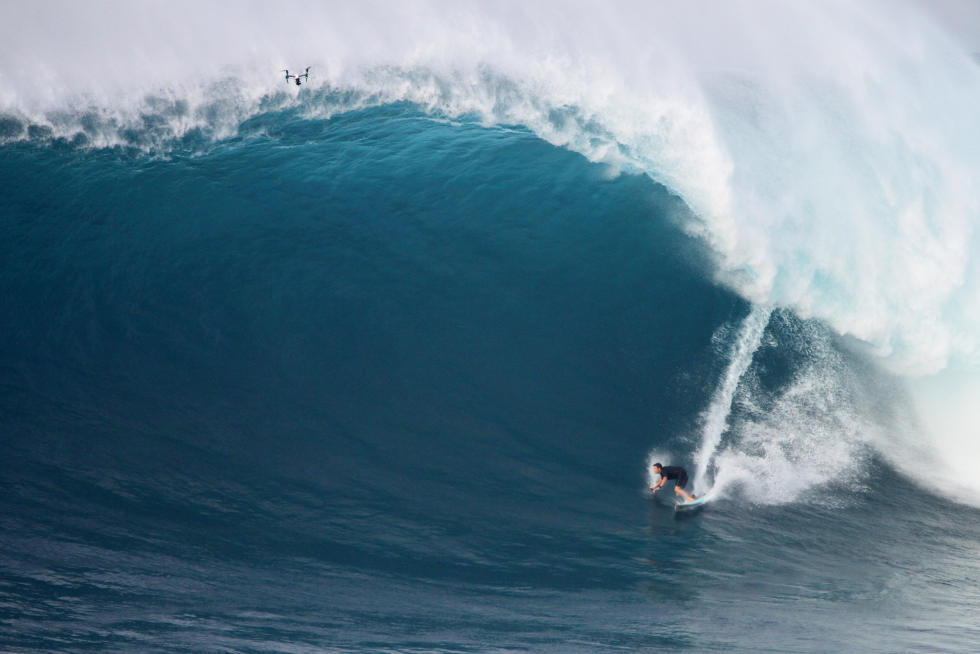 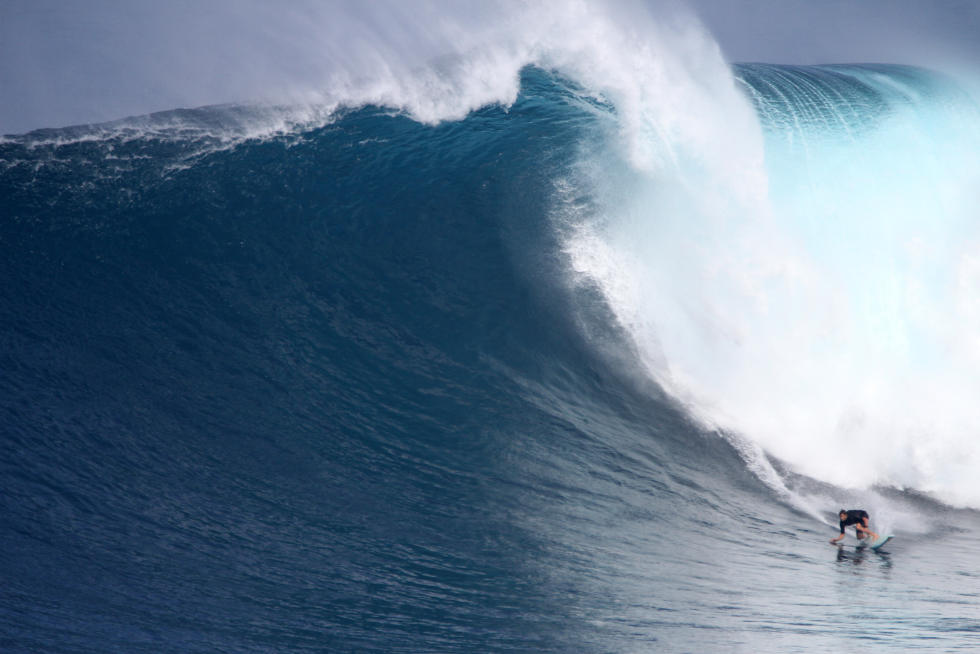 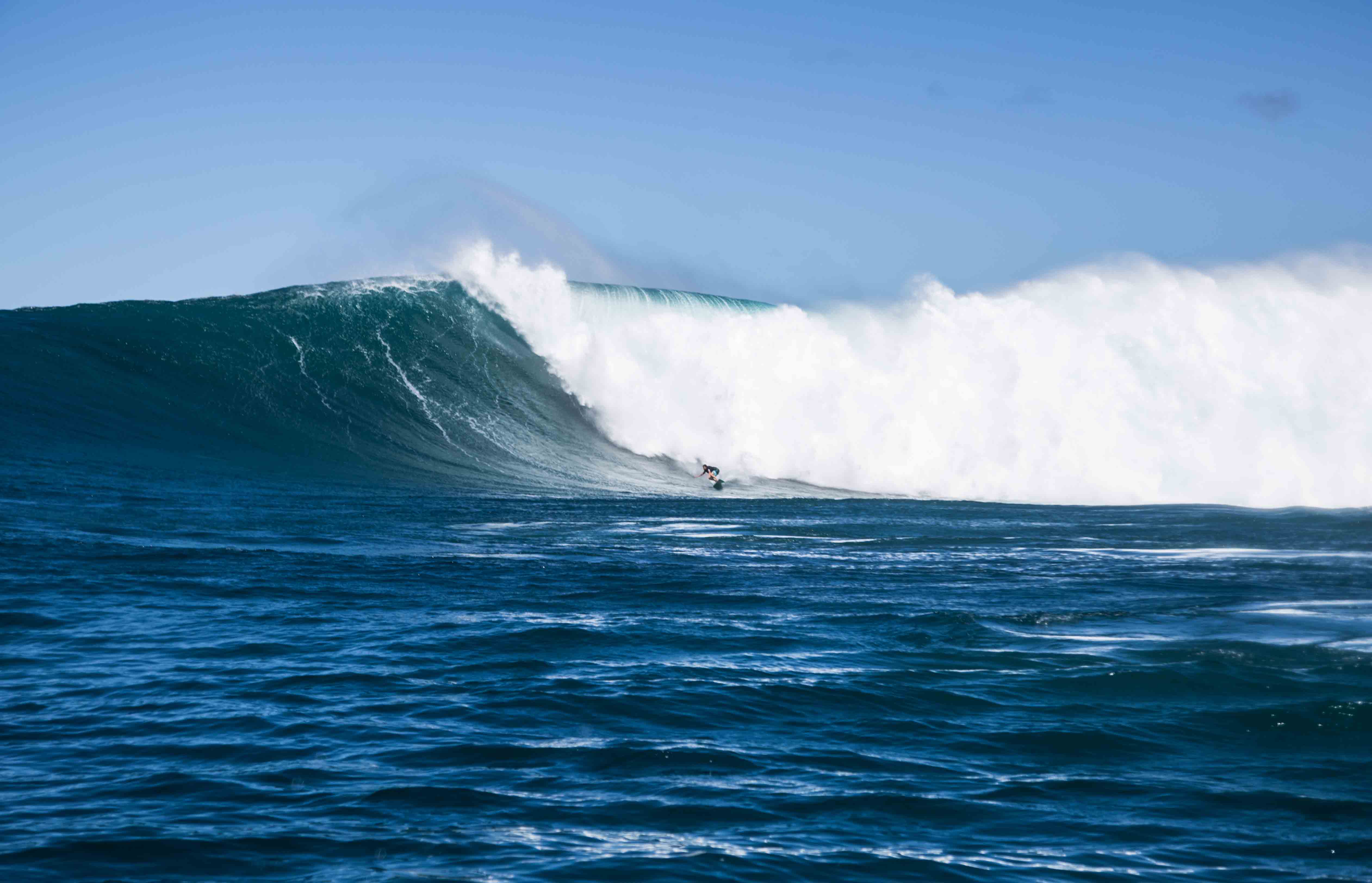 Ian at his favorite wave in the world, “JAWS” photo: Marc Chambers 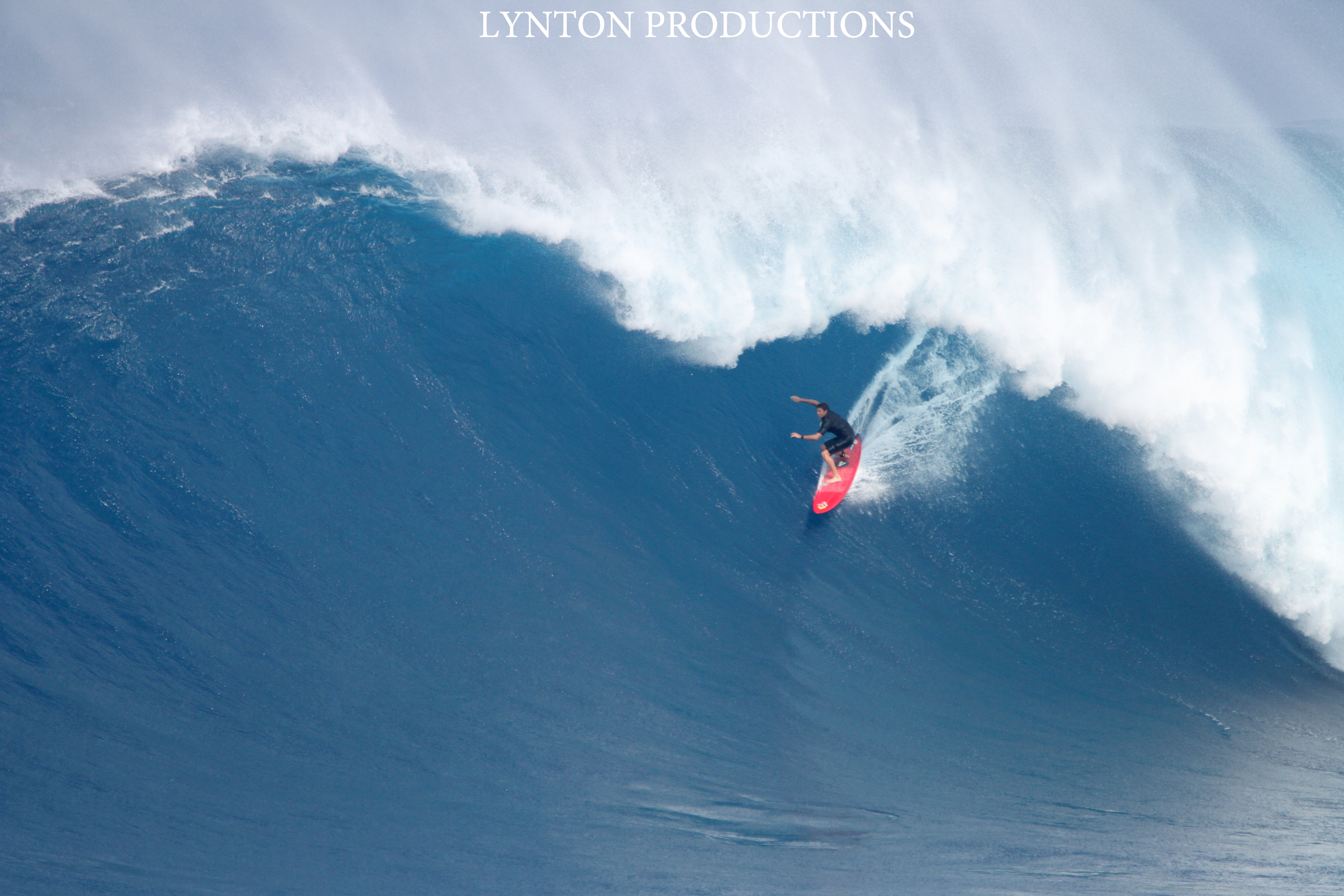 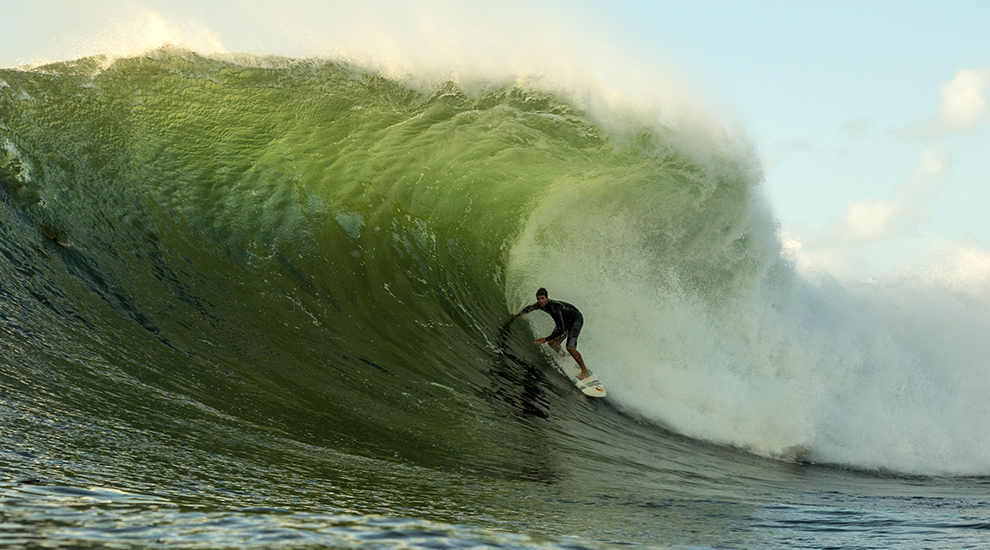 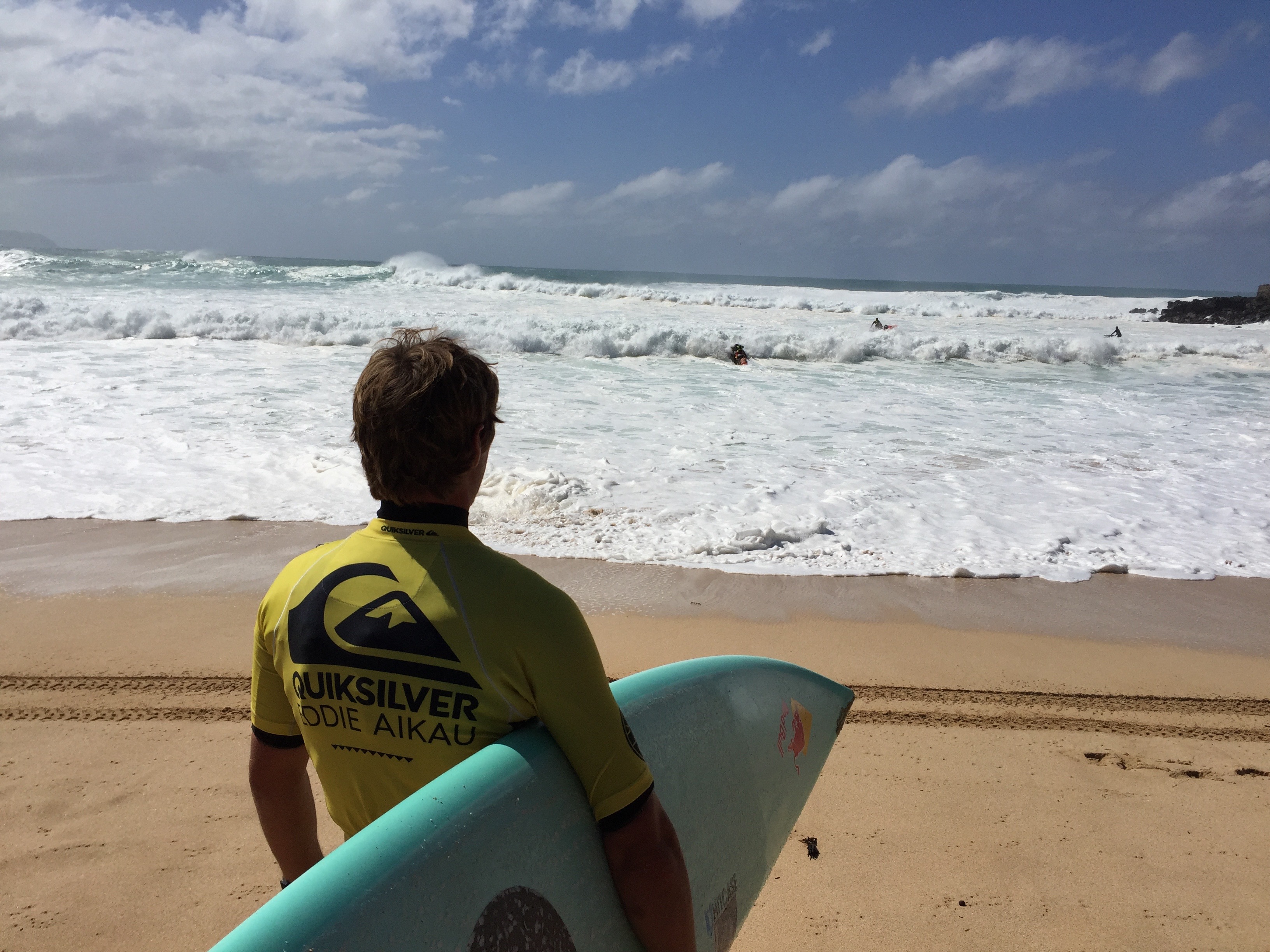 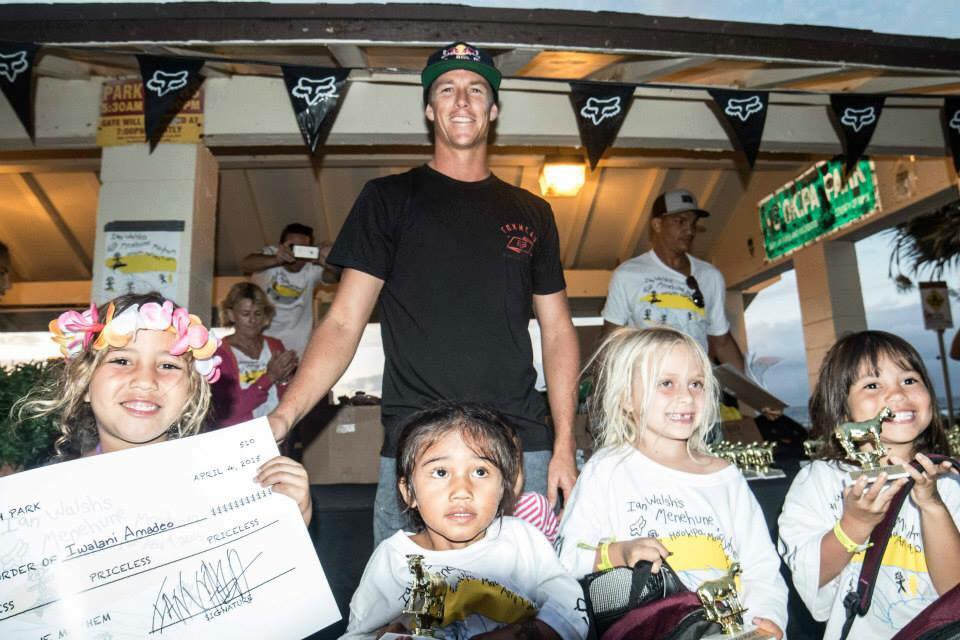 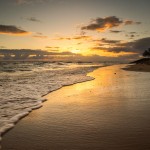 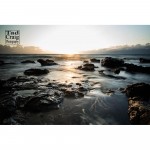