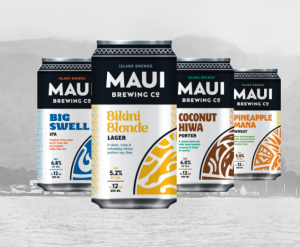 Maui Brewing Co. (MBC) has released its new look, ties their family of beers together with fresh packaging and branding.  Officials say the new identity incorporates vibrant tones with a contemporary island vibe. The refreshed logo, new icons and new web presence were introduced to the company’s 96 employees in a private event at the Kīhei brewery, prior to announcing it to their partners and the media.

“While demonstrating a clear visual change, our refreshed brand represents our solid foundation and continues the MBC legacy without losing our heritage, or the power of our logo recognition that has been built over the past decade,” says Garrett Marrero, CEO of MBC.

MBC contracted The Butler Bros of Austin, Texas to lead the brand update and a redesign of the full line of packaging. The Butler Bros visited Maui, immersing themselves in the Maui Brewing Company ‘ohana and culture. They collaborated with influential Polynesian tattoo artist Orly Locquiao to create icons for Bikini Blonde Lager, Pineapple Mana Wheat, Coconut Hiwa Porter, Big Swell IPA, and Island Root Beer. The new design establishes a structured, unified look for all the beers that will allow MBC’s internal marketing team to maintain the brand over time.

The new website, re-vamped by Webmaster Services Hawaii, is designed with a fresh new look and easy navigation for finding the latest information about the beers, the brewpub, and events. The website now includes a digital Beer Finder to search for MBC beers in restaurants and retailers.

“Our fans can be assured that while our brand has a new look, we are still brewing the same great indie craft beer!” Marrero says.

Maui Brewing Company recently expanded its new production facility, which increases capacity to nearly 100,000 barrels, and is on pace to brew 45,000 barrels in 2016. The expansion will allow MBC to evolve into a craft beverage company with plans to distill spirits as well as produce craft sodas, ciders, and meads.

Leaders say MBC is a fiercely local company and has remained steadfast regarding local production. MBC team members are stewards of their communities and the ‘aina, and curators of the craft beer way of life. Their beers have been recognized worldwide for quality and innovation. 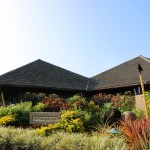 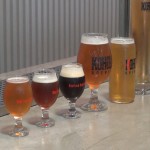 Sansei and Koholā Pair Up for Special Dinner