Amanda Joy Bowers, a 26-year-old Haʻikū native, gained more than a thousand fans overnight after one of her art pieces went viral online.

808 Viral, a popular Facebook page sourced by independent content creators for people in Hawai‘i with funny videos, memes and pictures, found one of her pieces online and re-posted it on their site. It has become one of the page’s most-liked pictures.

With 7,500 likes and 4,500 thousand shares on Facebook alone, Bowers’ inbox exploded with requests. “It was pretty neat to have requests popping up every couple minutes,” she said. Before her post went viral, her Facebook art page had a few hundred fans; after it went viral, she neared almost one thousand. On Instagram, she gained one thousand new followers. “I’m not on Twitter, but I was told it was re-tweeted about a thousand times too,” she added. 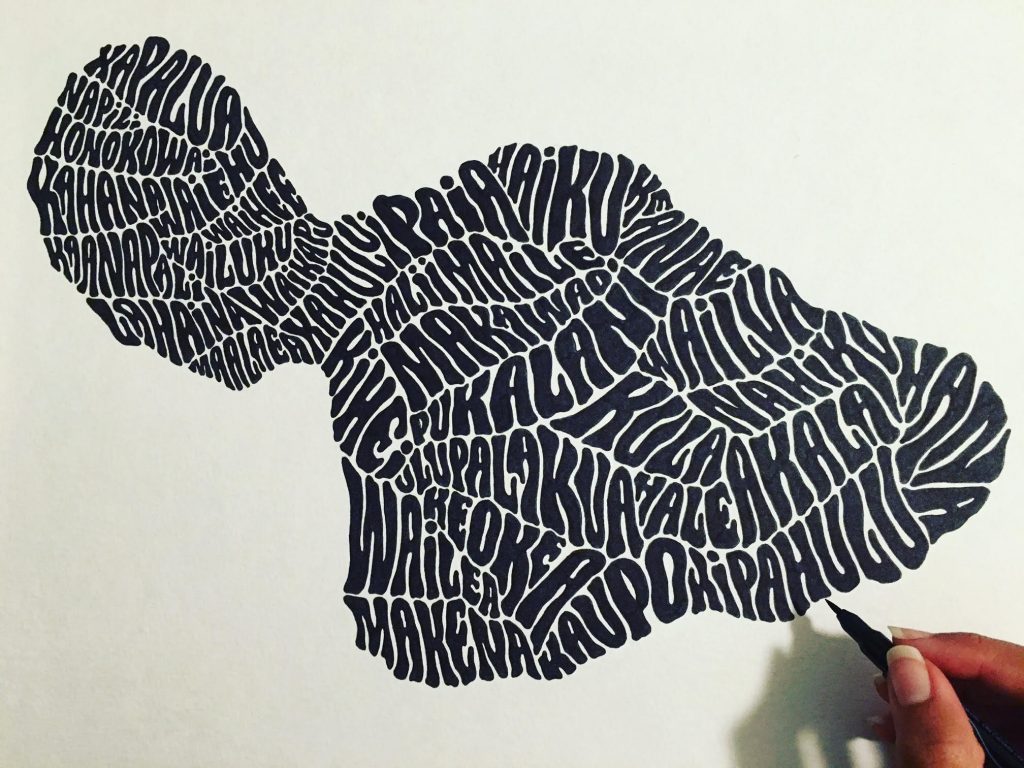 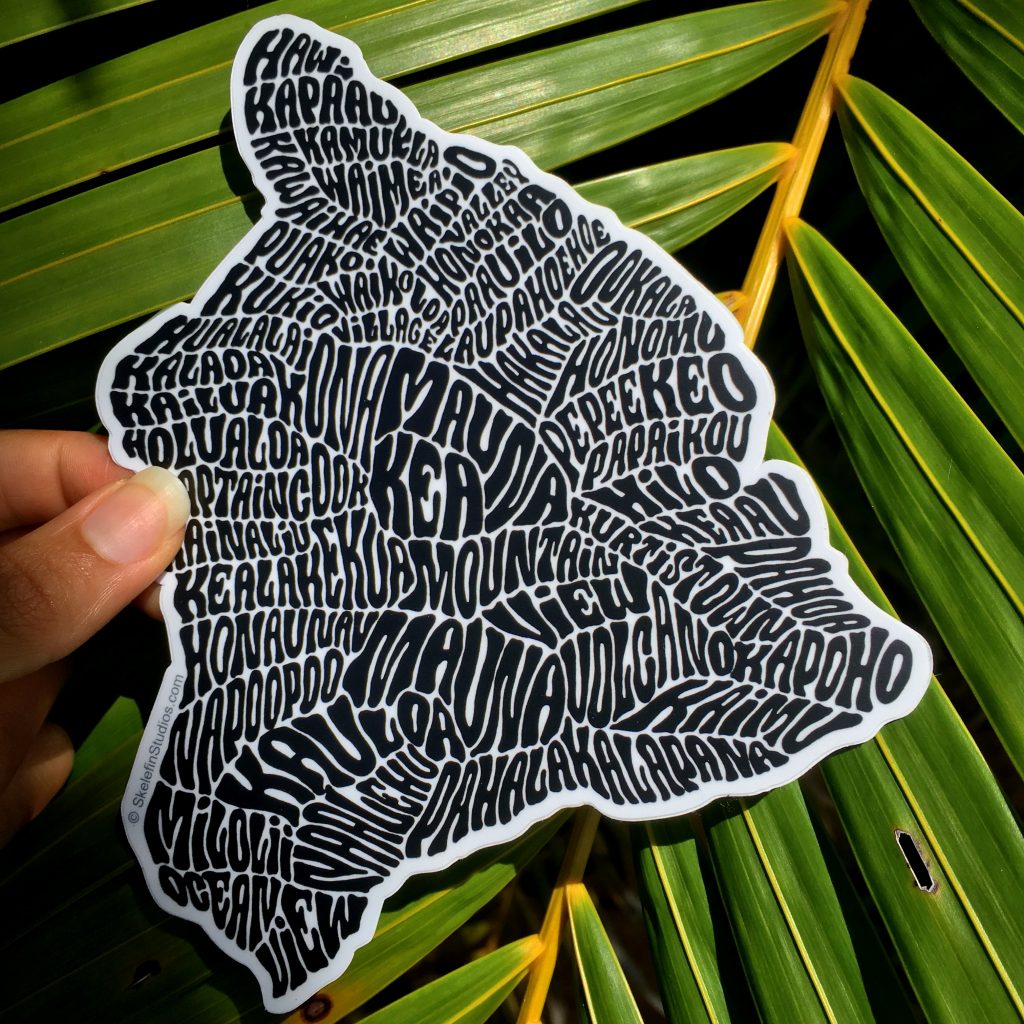 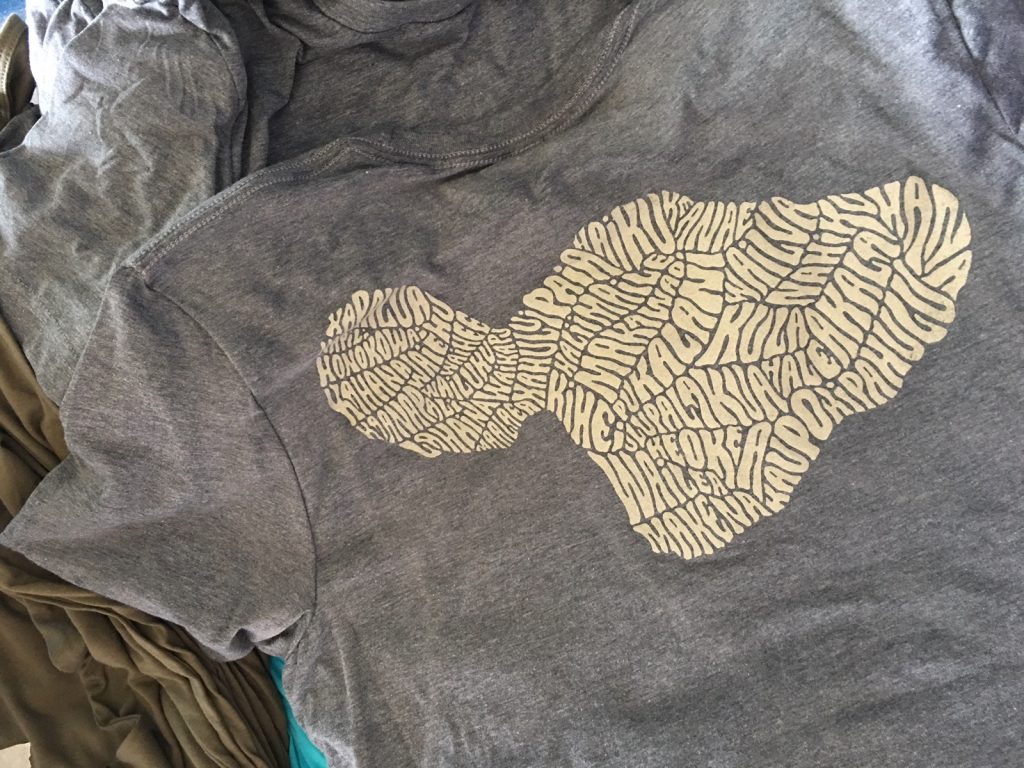 Bowers is finishing working on her Maui t-shirts which will be available soon on her online store.
Photo Courtesy Amanda Joy Bowers 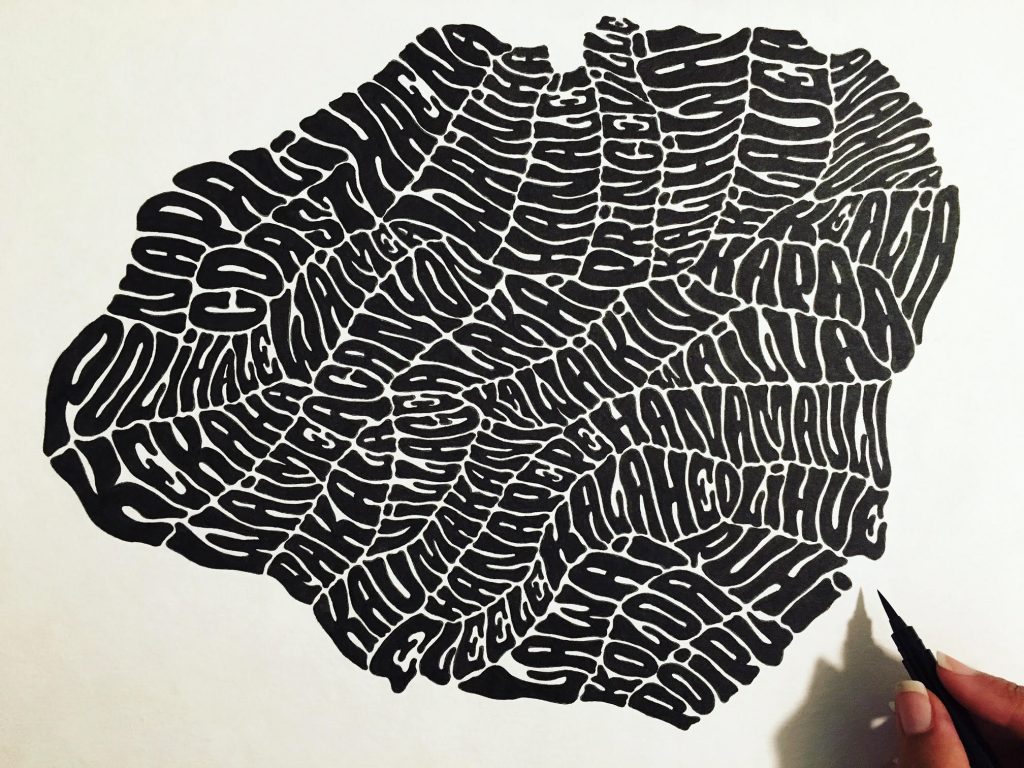 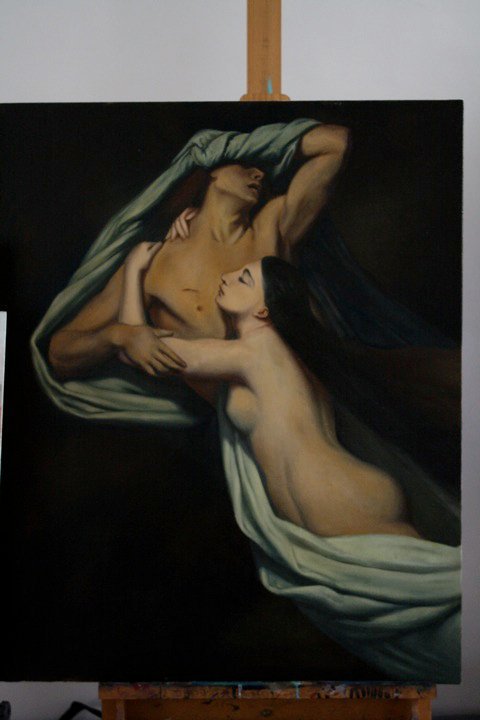 Bowers had the honor of being a copyist in the Louvre in Paris back in 2011, an opportunity only 150 people receive a year. Photo Courtesy Amanda Joy Bowers 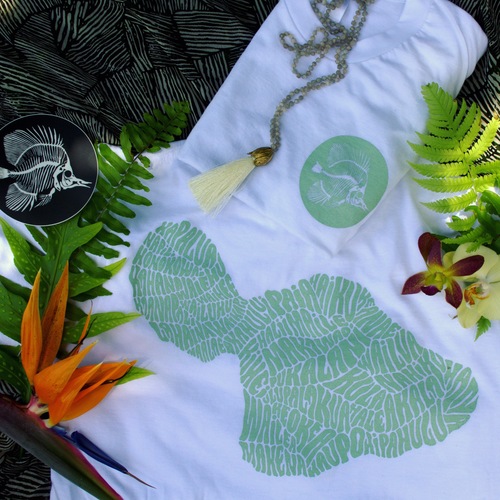 Maui t-shirts that sold out immediately on her online store. More to be restocked soon.
Photo Courtesy Amanda Joy Bowers 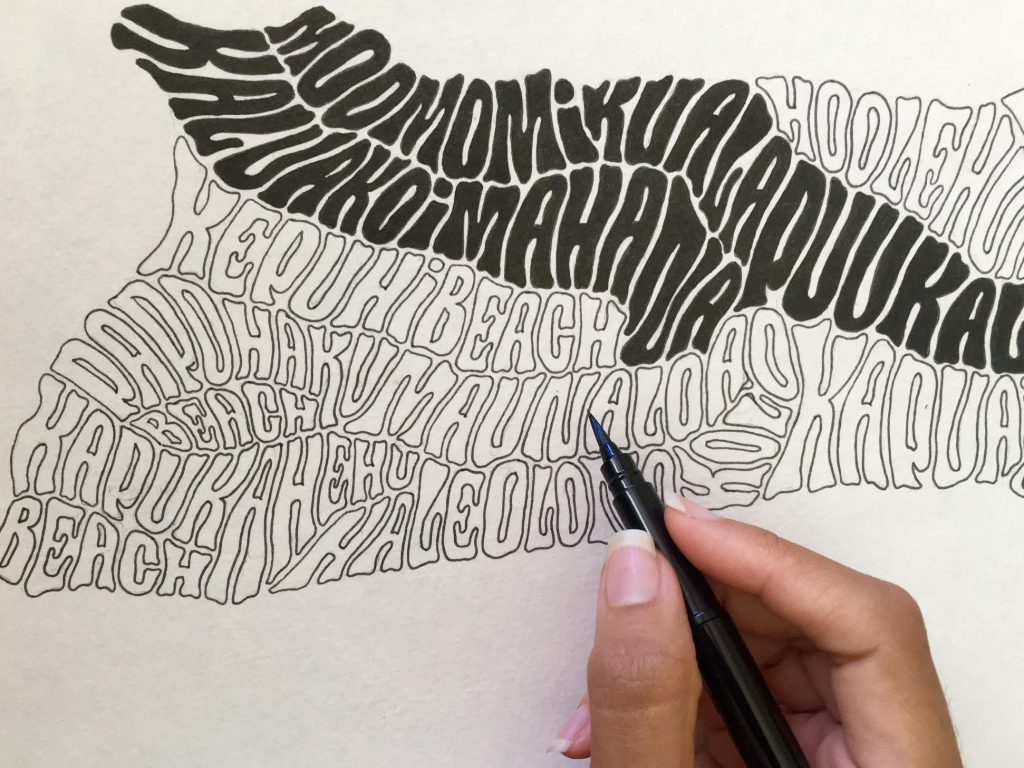 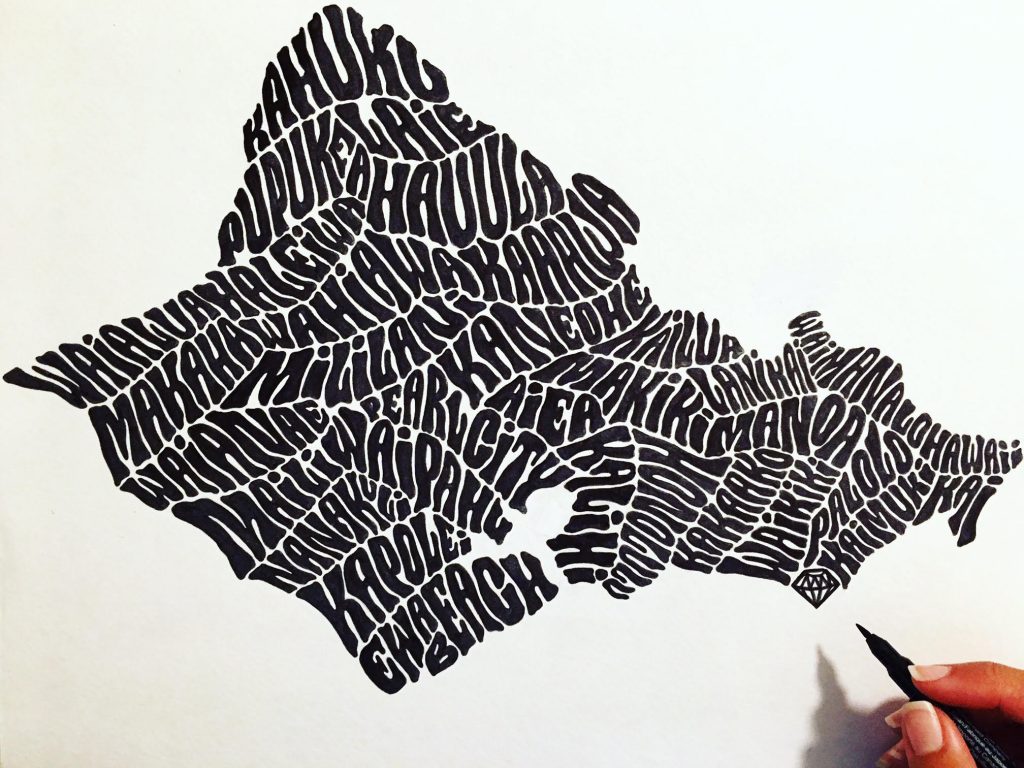 Bowers’ final O’ahu piece. The picture that went viral on Facebook and put her on the map.
Photo Courtesy Amanda Joy Bowers

Bowers started her company Skelefin Studios in March 2015 with her own money as a promise that she made to herself years ago, “I started it right before my birthday, I told myself I would have my own business when I’m 25,” the artist said. Her late nights and hard work have slowly paid off.

A few months ago Bowers had an idea to draw the islands with words. “I love doing lettering and groovy kind of writing so they can form into shapes,” she said. She started with her home island of Maui, she put the piece on 50 stickers and a few t-shirts to sell on her online store and within two days both sold out. “When those sold out I started drawing the other islands,” she stated. “O’ahu was next, when I did O’ahu I just posted it for fun just to see who would like it, I just thought it was a cool idea and something I had never seen before.”

Bowers posted her O‘ahu piece on her Facebook page and the following evening, 808 Viral featured her piece. “I don’t even know how they found the picture,” she said. “But it was definitely a nice surprise.”

808 Viral told Bowers that they try to warn the people that they feature because the publicity is so good. Comments fluttered the site’s page asking who the artist was, if there were stickers, hats, t-shirts or more prints available. However, Bowers did not expect her one piece to become such a huge hit.

“I went from making two shirts to now ordering hundreds of shirts,” she laughed. She said she has learned a lot because she thought she would casually print stuff, but now, “I’m spending hours e-mailing people back and telling them it’s worth the wait.” As she gains more popularity she looks forward to using other options such as organic shirts, organic cotton, but ideally she wants local businesses to help out and do it in an eco-friendly way. She has more than 400 shirts being printed right now.

The wait she says is worth it because she wants her pieces to be as personable and local as possible. “I could have gotten it printed on the mainland in bulk, I could print stuff out right now through a computer but I want each piece to be special,” she added. Everything is done by hand and she silk screens each piece and t-shirt.

As with most viral social media posts, there were some negative comments towards her pieces.

“People get mad because I missed their hometown, but I want people to look at it as an art piece and my view on it,” she said.

She adds that she is not an expert on all of the islands and that she contacts at least two people from every island that she has worked on. After she looks at a few maps, she makes a list of the places and has her contacts look over it, “just to see if I’m missing anything or if anything is called something else,” she stated.

Bowers said there is a lot more work put into the pieces than people realize. She starts each piece with pencil so she can erase to try and make more room. She then draws sections and makes letters fit into that specific section.

Originally, she wanted the Maui piece to be big. “I took away like 8 places and it’s hard because you don’t want to get rid of places but it’s all squeezed in there and to put the word in that general area – it’s not easy,” she stated. “It’s really a big puzzle and that’s what people have to understand, I couldn’t do every spot, I wish I could.”

But she has added new islands. After O‘ahu, she started working on Big Island, then Kaua‘i. She just recently finished Lāna‘i and Moloka‘i. She posted a rough draft of her Lāna‘i piece, and was touched when someone from Lānaʻi commented, ‘I love you for this because you did my island.’

“It feels really cool to have such great local support,” she said. 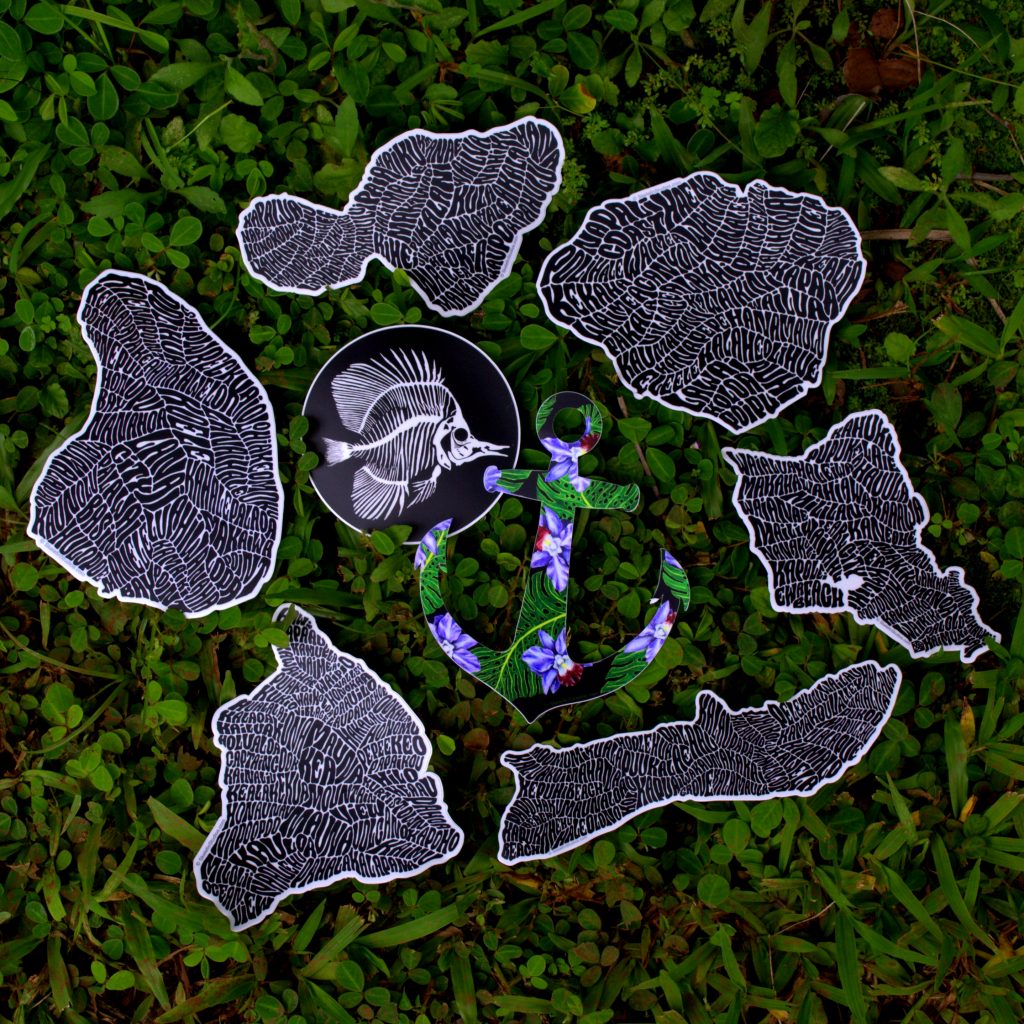 Since the piece went viral, stores and companies have reached out to do collaborations with her. Although she prefers not to say which companies, it is a very impressive list. “There are certain things in the works with a few people,” she said. “Some people ask me about logos and stuff and I’ve had some opportunities to not only collaborate but also sell my stuff in stores at some good places.”

However, Bowers only had her own online store open for four days before her pieces went viral and she has decided to sell her stuff exclusively on her online store for now so she can grow her brand.

In the past Bowers has hand painted on Tom’s shoes, skateboards, surfboards, hats, vehicles and her strangest request to date, “a kung fu stick.”

The young artist said she has been painting all of her life and won her first art contest back in second grade. “My second grade piece was [a pineapple] displayed at the MACC for a few years.”

Bowers said she has gained her inspiration from growing up around nature and plants and being near the water and having been inspired by natural things in Hawai‘i.

Although her art is a mix of Hawai‘i, the artist has traveled the world and has been inspired by other cultures too. “I’m born and raised here but I have influences from where I have traveled to and from school,” she said. “I have these other cultural influences, patterns and prints from Indo and Morocco and Portugal and I want that to be mixed into it. It won’t always be Hawai‘i stuff,” she added, “but I definitely get the most influence for my pieces from Hawai‘i.”

Bowers attended Wake Forest University as a Presidential Scholar for Distinguished Achievement in Art, a university Ambassador for the Arts. While attending Wake Forest University she studied old master painting as a certified Louvre copyist in Paris, France.  She graduated from Wake Forest with a major in Studio Art and a minor in Entrepreneurship and Art History.

After gaining inspiration from Indonesia and Paris and traveling around the world, she came back home to Maui.  She now is a freelance fine artist and the owner and designer of Skelefin Studios, LLC.

This has been a big break for the artist, finally putting her on the map.

She said her main goal was to make her own company by 25 and have it be something her friends and family can be involved with. “I just wanted it to be a way to make some extra money and provide my art in a fun and affordable way.”

Her new shipments have just arrived of all island stickers. As of publishing she has Maui t-shirts printed, with Big Island and O’ahu shirts complete by Tuesday, June 7.

She offers free shipping on all her items with a no-return policy. You can check out all the items here. 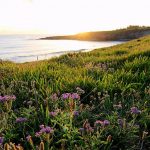 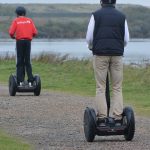