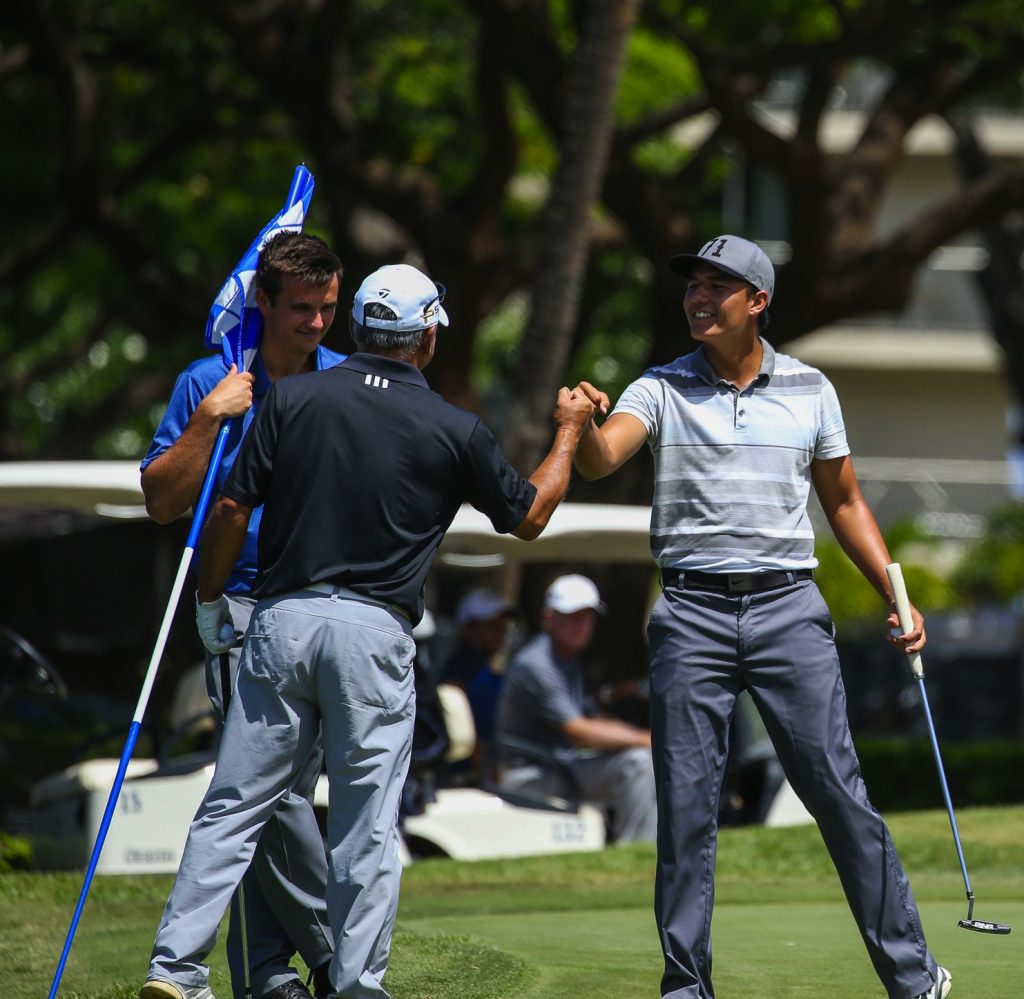 Alex Chiarella is congratulated on his birdie on seventeen during the final round of the Kāʻanapali Classic Pro Pro held on the Royal Course. Kaanapali, Maui June 11, 2016. Photo credit: Aric Becker

Both the teams of Chiarella/Omer and Hayashi/Carll started off the day with a bogey on the first hole, but that was the only blemish on either of their scorecards.

The tradewinds had subsided from Saturday, allowing players to give themselves more opportunity for scoring, but Hayashi and Carll just couldn’t keep up. 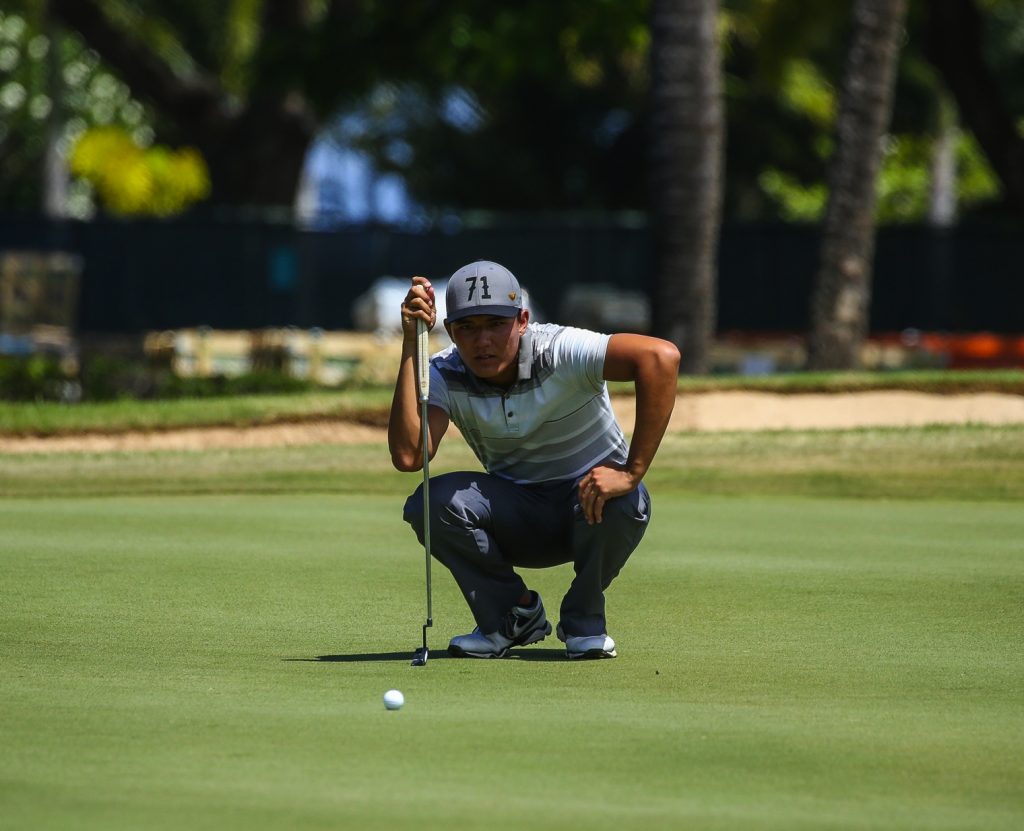 Alex Chiarella lines up his birdie putt on seventeen during the final round of the Kāanapali Classic Pro Pro held on the Royal Course. Kāanapali, Maui June 11, 2016. Photo credit: Aric Becker

“We both were slow out of the gate today, but we made a heck of a lot of pars – unfortunately with this format, you need to make birdies. The conditions were perfect today and those boys we played with (Chiarella/Omer) really played well,” said Kevin Carll.

He continued, “On #13, Omer made a great putt for birdie – then I made about a 60 footer on #14 for birdie which would have put us just one shot off of them, but Chiarella matched it with a 40 footer of his own – they were on fire.”

Chiarella and Omer would then go on to birdie 15, 16 and 17 on the home stretch to secure the win.

“Yesterday there was a 2-3 club wind so it was more of a grind, but today we knew there were birdies out there to be had. The course sets up nice for us and Omer hits it great off the tee, so he went first for us all weekend,” said Chiarella. 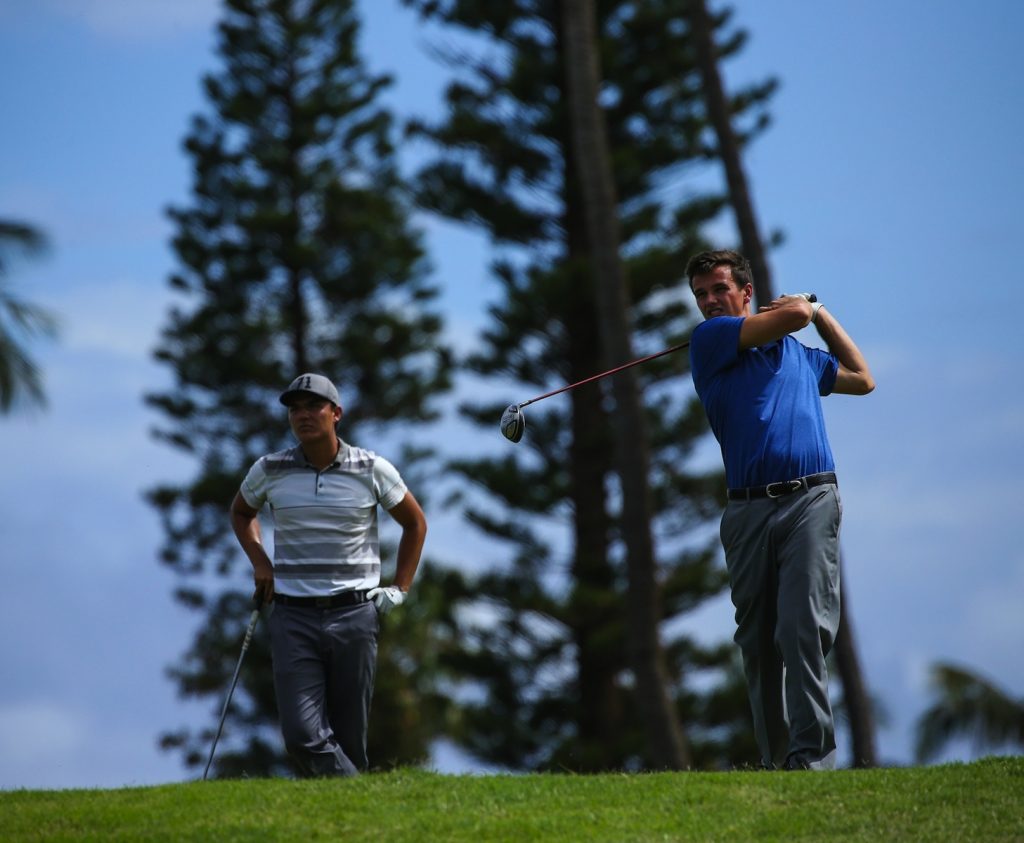 Alex Omer tees off on number fourteen during the final round of the Kāanapali Classic Pro Pro held on the Royal Course. Kāanapali, Maui June 11, 2016. Photo credit: Aric Becker

When asked about the birdie on #17, Chiarella said, “Omer’s shot got caught a little bit in the head wind and landed in the hazard so I knew I had to be a little more aggressive to stay safe. My shot spun back a bit on the green and landed about 7 feet from the hole – I then managed to roll it in, it was a downhill left to right putt with some speed on it.”

This weekend was Chiarella’s debut tournament as a Professional after graduating in May from University of San Diego. Chiarella played on the USD golf team and had previously played for Seabury Hall. Chiarella won the 2012 Maui Open and came in second in the 2012 Hawaiʻi State Amateur Stroke Play Championship. 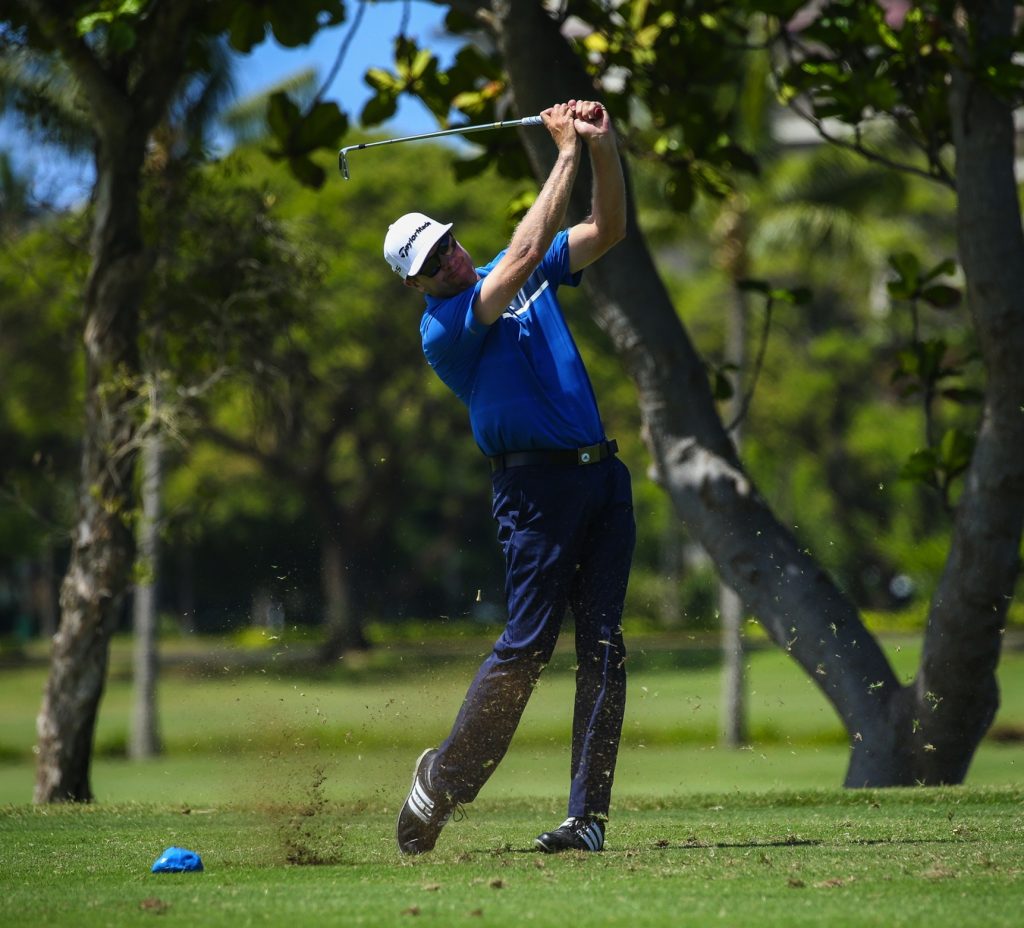 Kevin Carll tees off on number seventeen during the final round of the Kāanapali Classic Pro Pro held on the Royal Course. Kāanapali, Maui June 11, 2016. Photo credit: Aric Becker

Chiarella’s playing partner, Alex Omer, is a long time friend and played for Seabury as well (one year ahead of Chiarella). Omer hasn’t played competitive golf since high school but was still able to contribute five birdies and several par saves in Sunday’s round at Kāʻanapali.

Chiarella commented, “Omer and I play quite a bit together just for fun in the summer – this weekend was great, we had a lot of fun out there at Kāʻanapali.”

Kevin Carll and Kevin Hayashi won the 2015 Kāʻanapali Classic Pro-Pro, the 2014 Nike Golf 4-Ball tournament and the 2000 Head Pro-Assistant Pro tournament together at Hualālai, in addition to having a long list of tournament wins individually. 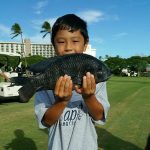 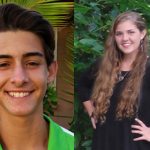