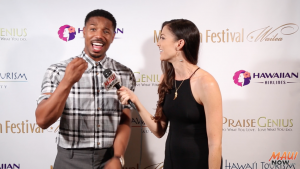 The actor reveals which character role has been the most rewarding for him personally. He shares what he plans to do on Maui and chats about Fruitvale Station and what’s ahead for him.

Check out the video below for the full interview.

See Maui Film Festival press release below for more information.
Wailea, HI (April 28, 2016) – Michael B. Jordan will be the recipient of the 2016 Maui Film Festival Rainmaker Award, it was announced today by Barry Rivers, founder and director of the festival, which will be held, and celebrate its 17th annual event from June 15-19, 2016, at the Wailea Resort in Maui.

The Rainmaker Award honors a film artist for having the mysteriously magical ability to profoundly and positively impact the creative dynamics of every project they are involved in both on the set and on the screen. The award will be presented at the Celestial Cinema located at the Wailea Gold & Emerald Golf Course on Thursday, June 16th.  Tickets and passes are available at www.mauifilmfestival.com.

“Michael B. Jordan’s lead roles in ‘Fruitvale Station’ and ‘Creed’ knocked me out!” said Rivers. “Viewed alongside his other exemplary performances, on screens large and small, it is clear that Michael is talented beyond words and more than worthy of the admiration and deep respect from anyone who loves storytelling.  Michael B. Jordan is the real deal and we’re thrilled to honor him at this year’s event.”

Michael B. Jordan was last seen in Ryan Coogler’s highly acclaimed film “Creed”, starring alongside Sylvester Stallone and Tessa Thompson.  In 2015, Jordan also starred in a new version of “Fantastic Four,” playing the role of ‘Johnny Storm’ aka ‘The Human Torch’, opposite Miles Teller, Jamie Bell, and Kate Mara. He has previously starred in “Chronicle,” “That Awkward Moment,” opposite Zac Efron and Miles Teller and the George Lucas produced film “Redtails.”

Jordan successfully took on his first major leading film role when he starred as ‘Oscar Grant’ in Ryan Coodler’s “Fruitvale Station.” The cast included Octavia Spencer and Melonie Diaz, and was produced by Forest Whitaker. It premiered at the 2013 Sundance Film Festival where it received the Grand Jury Prize and Audience Award for U.S. Dramatic Film.

“Fruitvale Station” has garnered many awards including Best First Feature at the 2014 Independent Spirit Awards, Outstanding Independent Motion Picture at the 2014 NAACP Image Awards and the 2014 Stanley Kramer Award from the Producer’s Guild of America. The 2013 New York Film Critics Circle honored Fruitvale Station with Best First Film and the picture was also chosen as one of the Top Ten Films at the 2013 National Board of Review Awards, where Michael took home the award for Breakthrough Actor. Michael also won the 2013 Gotham Award for Breakthrough Actor and was nominated for an Independent Spirit Award for Best Lead Actor.

Jordan has also starred in three of the most critically celebrated television dramas of the past decade. First, Jordan played the hard-shelled but softhearted ‘Wallace’ in HBO’s dramatic hit series “The Wire”. He then went on to star as quarterback ‘Vince Howard’ on “Friday Night Light,” before playing  recovered alcoholic, ‘Alex’, on Parenthood.

For additional information, call the Film Festival Headquarters at 808-579-9244 or visit www.mauifilmfestival.com. 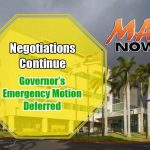 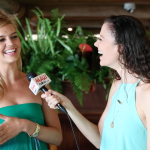