Mana Meals: Delivered to Your Door

In late April, they started preparing a handful of meals.

Within six weeks, they were up to 600 meals.

By the end of July, they’re projecting to expand to 1,000 meals per week.

“They” are Mana Meals, a new custom meal prep and home delivery service on Maui, founded by friends and colleagues David DeShong and Tom Ockerman, who have more than 35 years of combined fitness training experience.  They’re currently delivering healthy meals to customers from Kula to Kīhei to Kapalua.

“Tom got me into the fitness industry and I’ve been in it every since, traveling all over the U.S. and running health clubs everywhere,” says DeShong, who wanted to return to Maui after working as a personal trainer at Grand Wailea Resort & Spa. “What brought me back here was the idea of creating a business, ’cause I told myself if I came back to Maui I wanted to own a business and be able to help the community on a large scale.”

Born and raised in Hawaii and a former competitive bodybuilder, Ockerman has trained Hollywood celebrities, UFC champions, NFL and NBA athletes. He was inspired to create Mana Meals after seeing athletes at a bodybuilding competition on the mainland bringing their own pre-packaged meals to the contest. He teamed up with DeShong to develop Mana Meals into a reality.

“Nutrition is extremely important to maintain a healthy lifestyle and we recognize the challenge of cooking healthy food every day,” says Ockerman.

DeShong says the 21-meal plan, which delivers breakfast, lunch and dinner every day of the week, has been a popular choice.

“If they’re trying to lose weight, trying to gain weight, whatever their goal is, or if they just don’t want to cook, it’s the perfect plan for those people,” he explains. 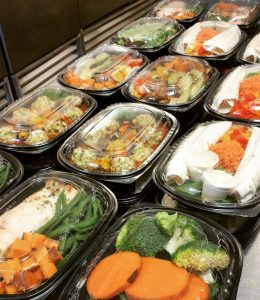 A range of meals available from Mana Meals. Courtesy photo. 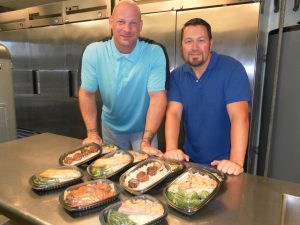 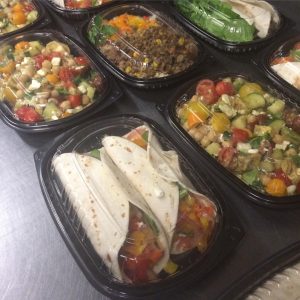 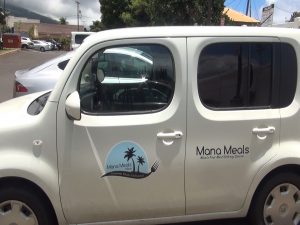 One of four Mana Meals delivery vehicles around the island. Photo by Kiaora Bohlool. 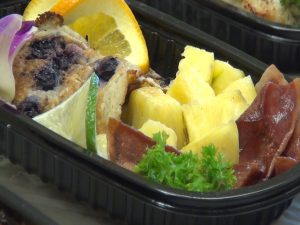 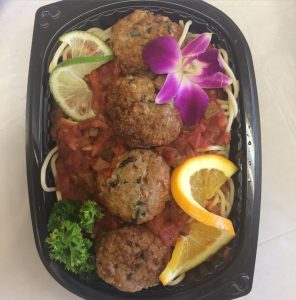 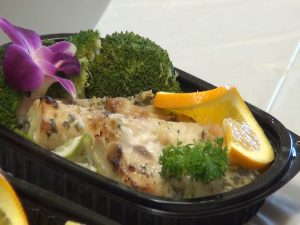 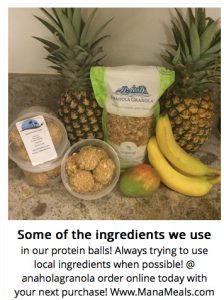 The partners say in addition to athletes, trainers and MMA fighters, their protein-packed plans have
attracted business executives, families and customers with health issues like diabetes and obesity.

Education is a big component of the business, and with virtually all its marketing done via social media, the founders are planning what’s called the “Mana Meals Minute” on Instagram to share useful tips on nutrition and health with customers.

“We want to be able to explain to them why we do what we do, whether it’s ingredients in the food, whether it’s a protein or different macronutrients,” says Ockerman. “The whole thing with this is education to make sure they accomplish their results.”

With what Ockerman describes as “phenomenal” growth, Mana Meals now has four delivery drivers and three cooks, with a chef to be hired soon.

As a perk to existing and prospective customers who order a 14-meal+ plan, Mana Meals will throw in the “protein balls” for free during the month of July, which Ockerman describes as “a sweet little ball to give you a kick on your cravings.”

The meals range between $9 and $10 each, depending on portion size of the protein.

“Feedback so far is that it’s very affordable,” says DeShong. “So I think our price-point is a lot better than even the competitors on the mainland!” 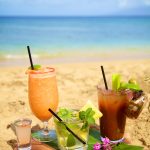 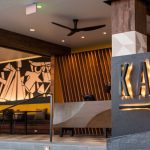