South Maui firefighters responded to a 10 acre brush fire on the mauka side of Piʻilani Highway, near Kūlanihākoʻi Street at 1:27 p.m. on Friday, Sept. 2, 2016,

Kīhei firefighters arrived on scene at 1:40 p.m. to find a 50 x 100 foot area of brush burning about 200 feet mauka of the highway. Winds blowing around 15 to 20 mph spread the fire quickly downwind and it consumed roughly 10 acres before firefighters brought the fire under control around 2:30 p.m.

Fire crews had the fire 100% contained by nightfall, but did not call it extinguished.  Crews set up a 50-100 foot “cold zone” around the perimeter that is completely out. When firefighters left the scene at 5:05 p.m., no smoke could be seen around the fire.

Maui Fire Services Chief Edward Taomoto said there are numerous kiawe trees within the blackened areas, and all appeared to be completely out; however, firefighters do want to wait until Saturday morning before officially calling it extinguished.  That is because kiawe trees can retain heat for long periods of time.

Crews are making periodic fire patrols overnight and will make a determination if the fire is extinguished in the morning if there are no signs of smoke.

The cause of the fire could not be determined. There were no injuries and no structures were threatened.

A battalion chief and 18 firefighters from Kīhei, Wailea, and Kahului responded to the fire. The fire department’s Air 1 helicopter also assisted with aerial water drops. 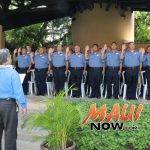 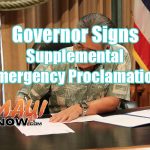