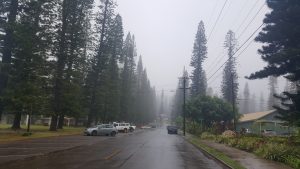 Lāna‘i firefighters were informed at 6:07 p.m. Saturday, Oct. 22, 2016, about a man who was lost near the Munro Trail, which travels across the island’s mountain watershed, known locally as Lāna‘i Hale.

The Colorado man, in his 30s, is a construction worker living on Lāna‘i temporarily for work.

He was driving along Keomoku Road on the island’s eastern coast and took an off-road trail up the mountain thinking it lead back to the city, but the trail did not.

His vehicle got stuck in mud and he continued up the mountain on foot until encountering thick impassable vegetation.

With darkness approaching, he called for help.

Fire crews searched Saturday night but could not find the man because of dense fog, heavy rain and extremely windy conditions that made it nearly impossible to see or hear a person calling out.

Firefighters spoke with the man by cell phone and instructed him to stay put, and they would return at first light the next morning.

When low -lying clouds lifted, crews spotted the man Sunday morning on a ridge not far below the Munro Trail.

The department’s rescue helicopter airlifted him safely to firefighters at 7:51 a.m.

Firefighters gave the man a ride down the mountain.

He was uninjured and was just cold from being out in the rain overnight. 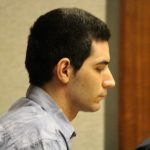 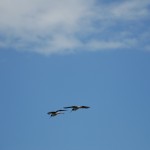