“At Maui Brewing Co. — we see ourselves as curators of the craft beer lifestyle and movement in Hawai‘i, as well as stewards of the community,” said Chis Thibaut, CEO of restaurants at Maui Brewing Co. “We have a great passion for local food and local beer and are proud to open our first O‘ahu location in partnership with Outrigger, a locally-based company whose values closely mirror our own.”

Critically-acclaimed chef, Terry Lynch will serve as executive chef at Maui Brewing Co. Waikīkī, offering a menu inspired by flavors of the Pacific and traditional pub fare favorites. Each dish will be made-in-house from scratch and emphasize fresh local ingredients. Executive Chef Lynch has travelled, trained and worked around the planet and was most recently an executive chef and partner in the Lettuce Entertain You restaurant group and a restaurant consultant.

The menu for Maui Brewing Co.’s debut Waikīkī restaurant includes its flagship line-up of beers: Bikini Blonde Lager, Big Swell IPA, Pineapple Mana Wheat and Coconut Hiwa Porter – as well as limited-release beers like Blood Orange Lorenzini Double IPA, Haleakalā Sunryes IPA, POG IPA and Lemongrass Saison. Comrade Crafts – beers made by other craft breweries – including varieties not available anywhere else on island will also be featured at this location. All of the beers offered on tap will be available for purchase in growlers and crowlers, which can be enjoyed responsibly outside of the restaurant.

“Outrigger is proud to partner with this innovative local brewery to bring an authentic taste of Hawai‘i to our guests and community,” said Sean Dee, executive vice president and chief marketing officer for Outrigger Enterprises Group. “Enhancing our product here in Hawai‘i as well our Outrigger Resorts in Fiji, Thailand, Mauritius, Maldives and Guam is a top priority; we’re confident that Maui Brewing Co. will provide a vibrant new experience for our guests and we look forward to toasting to its success.”

Maui Brewing Co. worked with award-winning WCIT architecture to create a dining experience that is enhanced by craft industrial design that incorporates both the craft-beer heritage as well as the rich culture of Hawai‘i. Just as its menu highlights local farmers and craftspeople, the brewpub’s design highlights local artists, including a 70-foot kinetic wall on the building façade facing Kalākaua Avenue. The wall is the first of its kind in the state; it’s made to move in the wind to simulate the movement of waves across the water.

The company’s love of beer is brought to life throughout the restaurant with kegs and growlers used as light fixtures, as well as a stairway entrance that features a large info graphic detailing the scientific process behind brewing beer. 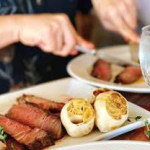 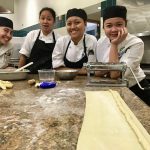