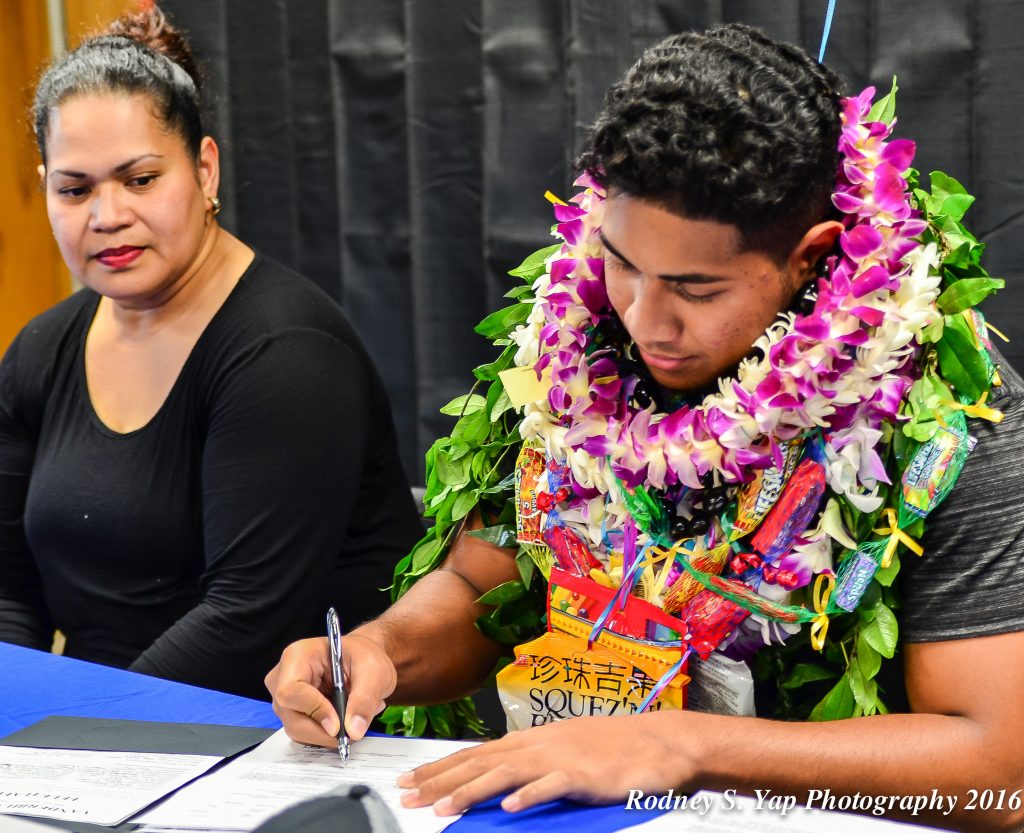 The pride of Maui High School, student-athlete Feleti Afemui, made his decision to attend Vanderbilt University next fall on a football scholarship official Tuesday, signing a National Letter of Intent before a classroom full of family, friends and faculty.

There was quite a buzz in the back of the Lono Avenue campus yesterday, Feb. 1, the first day prep football recruits across the nation are eligible to make their respective commitments official.

After accepting more than a dozen Lei from a portable classroom full of supporters, the Maui High senior was introduced by the school’s Athletic Director Michael Ban, and then ended a year’s worth of uncertainty by signing to play inside linebacker for the Southeastern Conference Commodores. 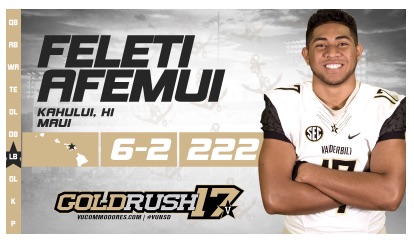 “Some of my friends have been giving me a hard time, but I tell them, ‘I’m still the same guy,’ “ said Afemui minutes before putting the pen to paper. “I hate getting attention, and honestly, I can’t wait to get this over with.”

After inking his signature, his mother, Amelia Iolani, and father, Penisoni, also signed the document, that’s when someone in attendance asked Feleti to put on the Vanderbilt visor in front of him. Everyone cheered Feleti, who left the Commodores’ cap for his father, who followed suit and flashed a huge smile.

Despite being overwhelmed with emotion, the 6-foot, 3-inch, 225-pound Afemui stood up and thanked everyone, starting with God first, for all the blessings that have come his way. 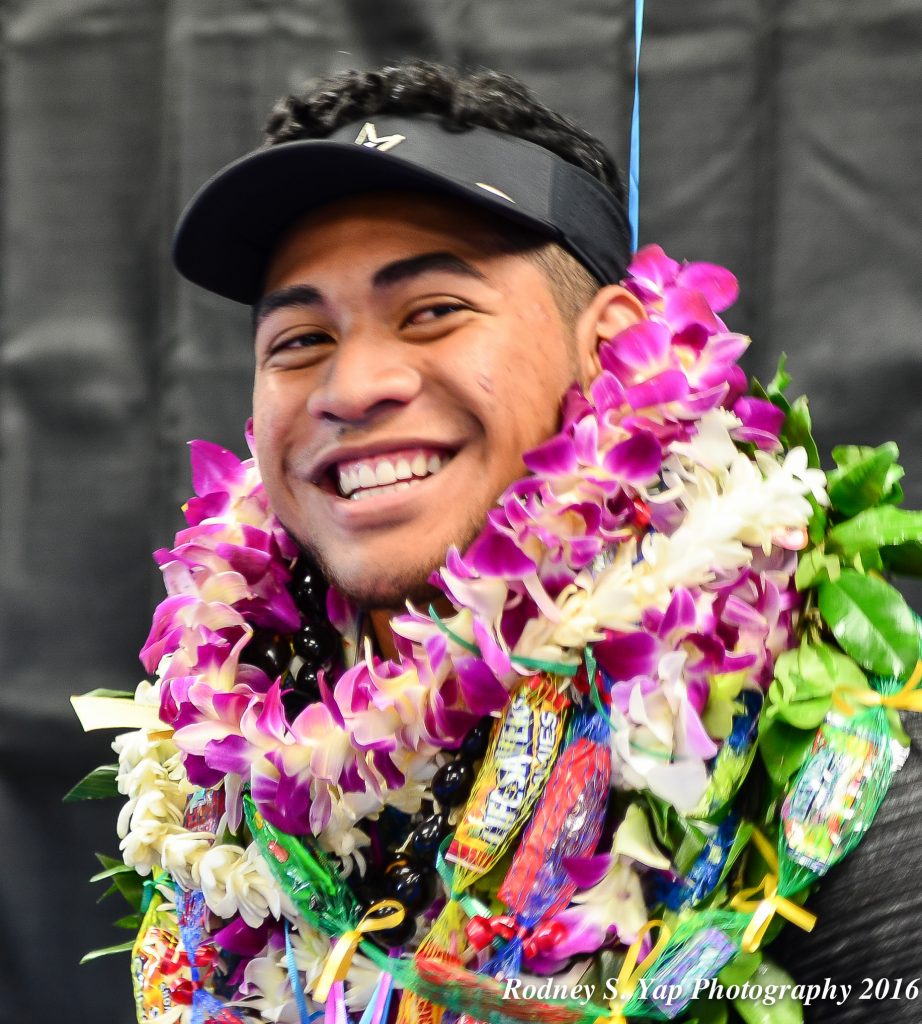 A happy Feleti Afemui, moments after signing his letter of intent to play football at Vanderbilt University. Photo by Rodney S. Yap.

“I want to thank Coach Hala (Halakilangi Frank Muagututia), for providing me the opportunities that I had, and I want to thank Maui High and its staff, Coach (Keith) Shirota for being a great coach to me throughout the years. I would also like to thank my teachers, and my linebacker coach, Coach Lono (Kaina), for believing in us and helping us. I would also like to thank the rest of the Maui High coaches and my teammates, because I wouldn’t have had the fun that I had playing without them.

“I would also like to thank my family, my church, my friends, my cousins, and everybody in this room right now. I can’t thank you all enough for all the love and support that I’ve received from all of you throughout the years. And last, but not least, the most important of all, here before God, I want to thank my grandmother.”

Trying to hold back tears, Afemui choked up at the first mention of his grandmother, who passed away just days before the Commodores’ made their original offer last April. And then, like he has done so many times on the football field, Afemui took a moment to compose himself, and hit reset, during which time onlookers clapped for him while trying to refrain from crying themselves. 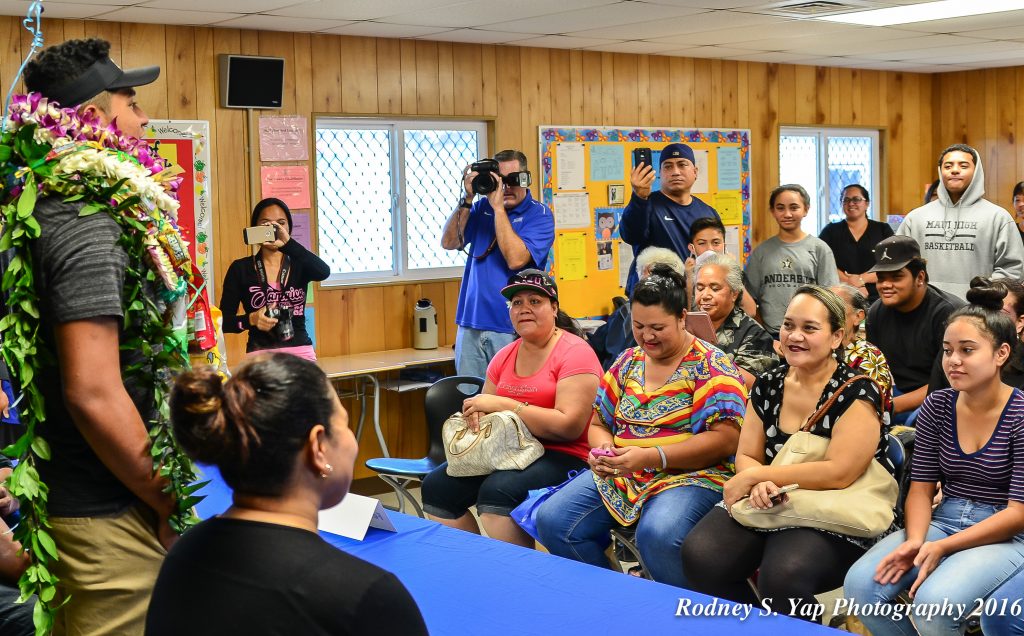 That’s because those who know Feleti well, knows how close he was to his grandmother, Elizabeth Malafu, growing up during his pre-teen years and then later in middle school.

“If she was here I know she would have given me lei and love. If it wasn’t for her helping me with school and stuff, and her love, and just being there for me. She was my biggest fan, my biggest supporter and she always remembered my accomplishments and forgot all my mistakes. I really wish she was here to see this, and I’m thankful for all she’s done. She is the main reason I’m here today and I tried my best for her. I know she is in a better place now and she deserves it. There is no better place than where she is now and I know she is happy. I thank you all for being here with me, and being the family that I have right here. As long as I have you here, and I have God, that’s all I need. I’m just happy that you all came and thank you. This is where the journey starts for me and I hope for the best for all you young ones and all of you here, thank you.”

For the next 15 to 20 minutes, Feleti posed with family and friends for photos, followed by pizza and light refreshments. 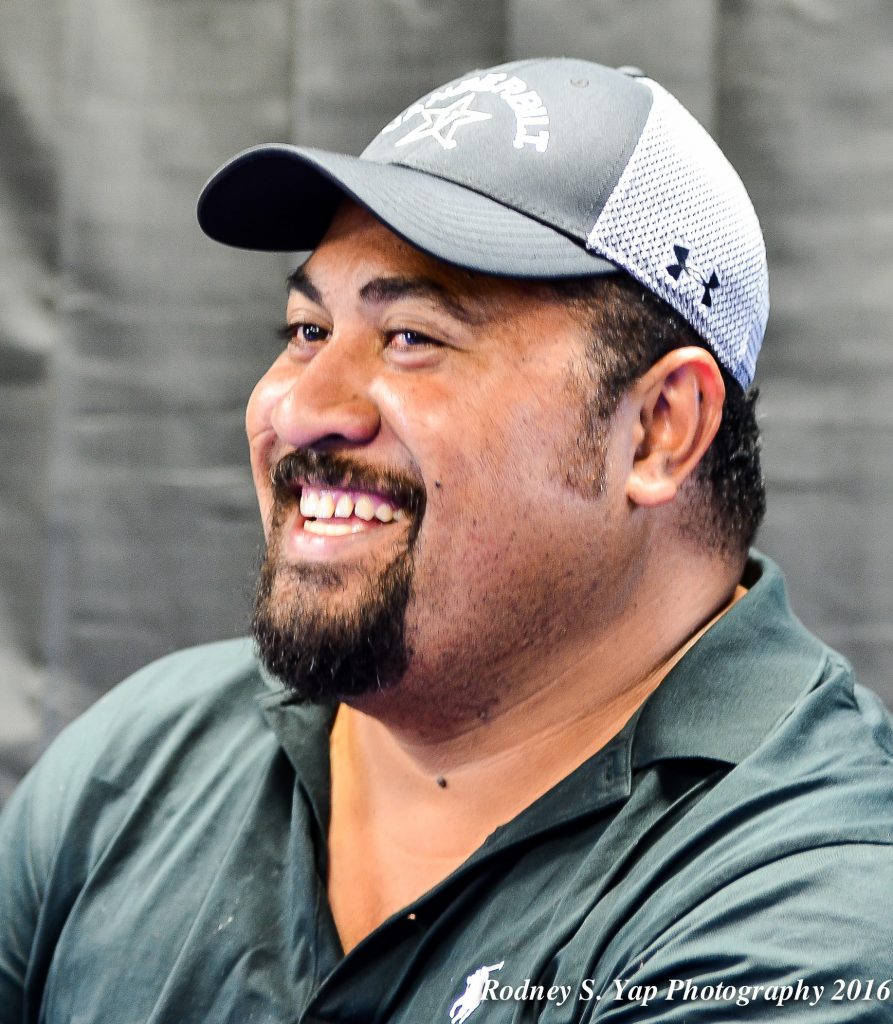 “This makes me feel so proud,” said Feleti’s father, Penisoni Afemui. “I’m just so proud for what he’s been able to achieve. The things we told him growing up he listened to us. He is a good boy and a good brother to our younger kids.”

Feleti has two younger brothers, ages 12 and 10, and a younger sister who is 8-years-old.

“We feel kind of like we’re floating in the air. It’s all pretty new to us and he’s our oldest son.”

Feleti, the No. 9 overall prep prospect in Hawaii and the 54th-ranked inside linebacker in the nation, according to 247/Sports Composite rankings, said he made up his mind to attend Vanderbilt on Saturday.

“The weather was nice there, it was sunny, but cold,” Afemui said of the private school located 1.5 miles from downtown Nashville. “In the elevator my first morning there, a man said ’hi’ to me and ‘have a good day.’ And the players were all welcoming, they weren’t jerks. When I met the players it wasn’t in front of the coaches, so they didn’t have to be nice, it was on their own, when I was with my host, and they were all cool.” 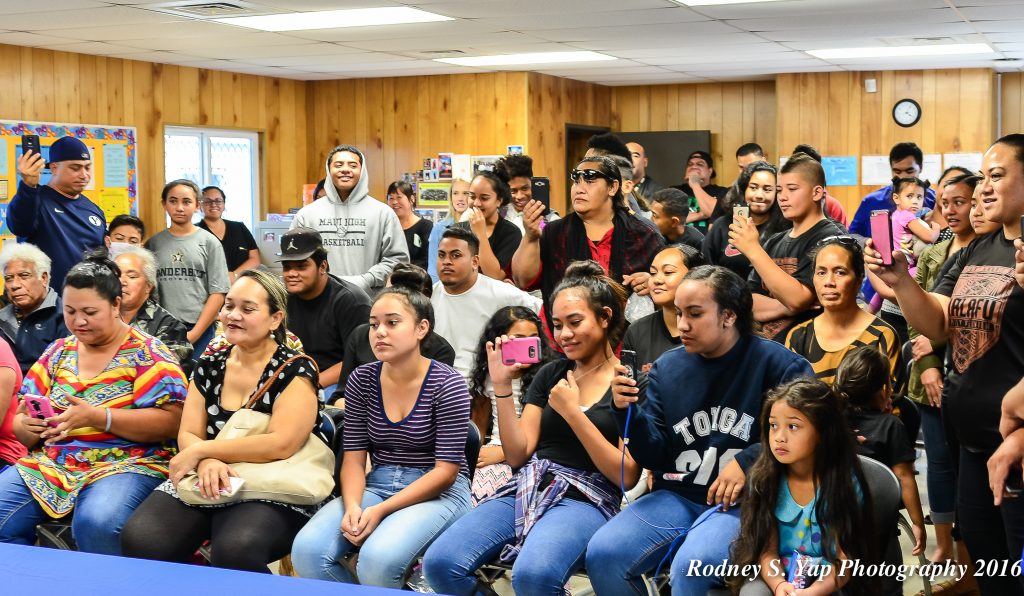 A crowd of friends, family and faculty jam into a portable classroom at Maui High to see Feleti Afemui sign his NLI to attend Vanderbilt University Tuesday. Photo by Rodney S. Yap.

“I think for Feleti and all of us at Maui High, this is really special,” said Maui High head coach Keith Shirota. “It’s our first really true signing of a Division I player since I’ve been around. I remember Robert Kemfort way back when, but for us right now, this is a great opportunity for him and hopefully it will be motivation for more of our kids.”

Shirota said Vanderbilt is getting the complete package in Afemui. 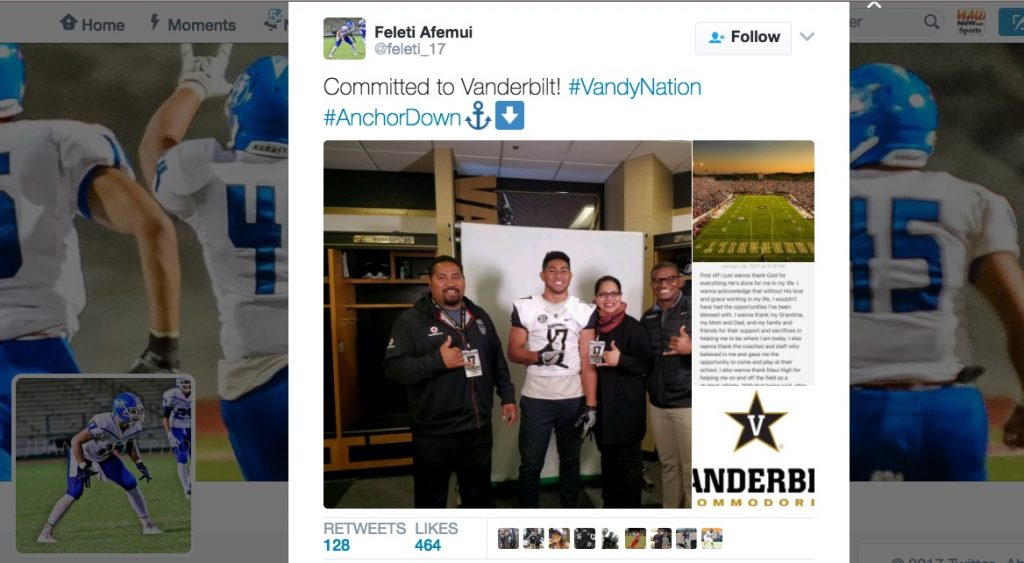 This is the tweet Feleti Afemui sent on Saturday after making a verbal commitment to play football for the Vanderbilt Commodores. Photo from Feleti Afemui.

“Not only is he a good football player, but he’s a great kid overall, great academics, great leader, great teammate, and all-around good person. He has no weaknesses.”

Afemui is the first Maui High football player to sign a Division I football scholarship since Kemfort signed with the University of Hawaii in 1996. University of Nevada Las Vegas linebacker Tau Lotulelei, a 2012 Maui High graduate, was named First Team All-Mountain West this past season, finishing with a career-best and team-high 117 total tackles. Lotulelei was a walk-on with the Rebels.

“Feleti is a great kid, he’s the definition of a student-athlete,” said Ban, the school’s A.D. “He’s done well here at Maui High School and we wish him the best of luck in the future. He’s a very humble guy, he works hard and he does the right things. He does everything we ask of him in the classroom as well as on the field, he was a multi-sport athlete and we’re going to miss him for sure.”

Afemui, a two-time Maui Interscholastic League Maui News All-Star and last season’s MIL Defensive Player of the Year, had 61 tackles as a senior, including 16 for a loss and 3.5 sacks, eight quarterback hurries, three pass breakups, three forced fumbles and a fumble returned for a touchdown. 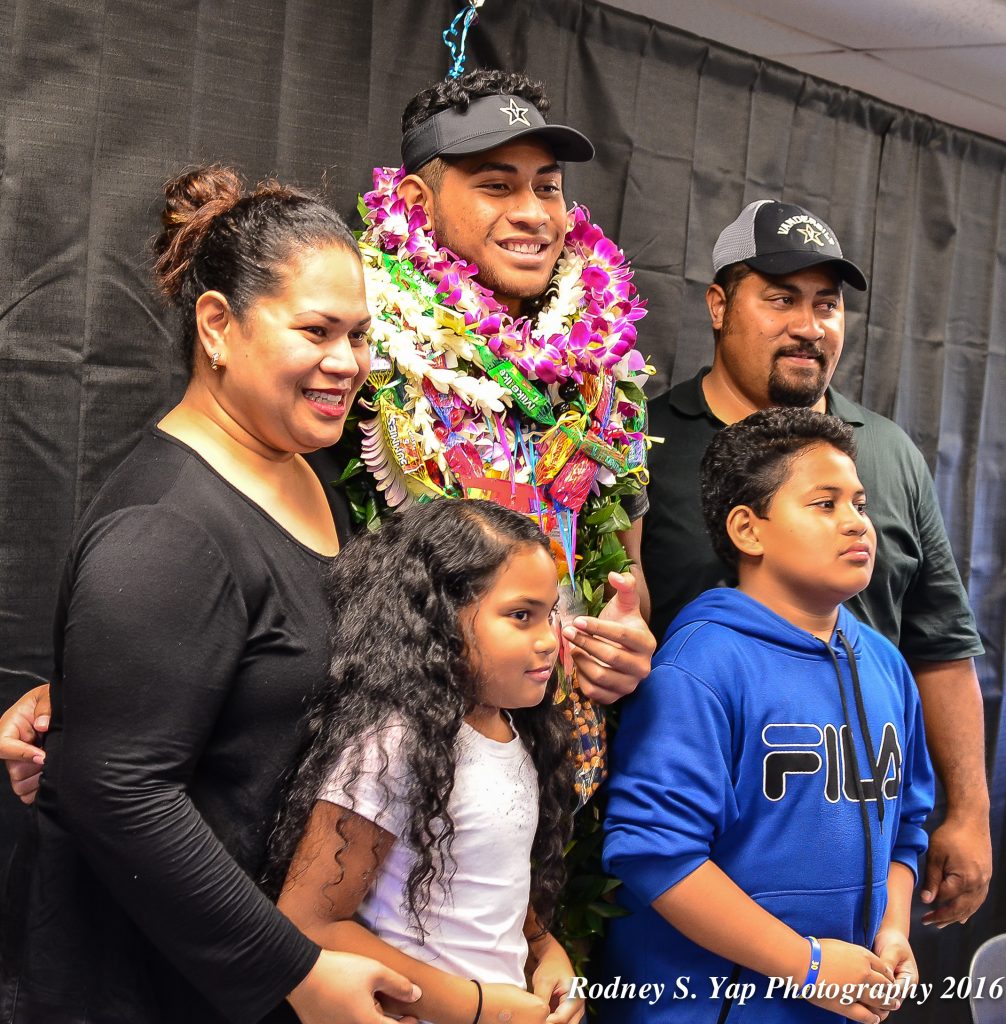 The Afemui family pose for a photo Tuesday. Photo by Rodney S. Yap.

Vanderbilt inside linebackers coach Chris Marve, who led the recruiting process for Afemui, said: “Feleti is dynamic, athletic, and long. Feleti did a number of things for his defense at Maui High that directly relate to what we do here. His football IQ is very high and enhances his playmaking ability.”

Vanderbilt’s football program continues to grow under the direction of Derek Mason, who enters his third season as head coach. The Commodores notched wins over Georgia, Ole Miss and Tennessee to finish the regular season 6-6, 3-5 in the SEC. That record made the Commodores bowl-eligible for the first time since 2013, setting up a Dec. 26 matchup with N.C. State in the Camping World Independence Bowl in Shreveport, La. 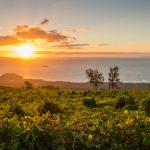 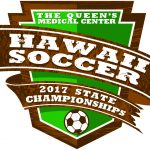