Fire crews responded to a vessel in distress a quarter mile off the Nākālele Blowhole in West Maui at 12:48 p.m. Tuesday, March 28, 2017.

The incident was reported by a bystander on shore who saw the boater waving for help with a white t-shirt.

At 1:11 p.m. an Ocean Safety rescue watercraft met up with a 19-foot disabled vessel with two men aboard off of Nākālele Point.

Lifeguards towed the vessel to Honokōhau Bay where a fire rescue boat from Lahaina took over. Firefighters took the vessel under tow and headed for the Māla Boat Ramp in Lahaina, where the boaters launched from earlier.

The two Maui men ran into engine trouble while fishing and were not able to call for help because of a dead cell phone battery. The men had left Lahaina with friends who were in another 26-foot boat. Their friend eventually met up with them as they were being towed back to Lahaina, and took over the tow off of the Kahana area.

Lifeguards from D.T. Fleming Beach Park, and firefighters from Nāpili and Lahaina responded to the incident. 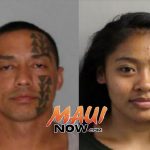 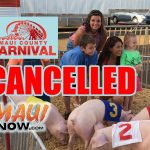