Tracking the Latest Moves of Kīlauea and Mauna Loa

A diverse array of techniques is utilized to monitor volcanoes around the world, including those in Hawaiʻi. These methods include tracking changes in the chemistry and volume of gases emitted from a volcano, recording earthquake activity, measuring changes in surface temperatures, documenting variations in eruptions, and tracking deformation of the ground surface.

Ground deformation is especially indicative of changes in the volume of magma (subsurface molten rock) within a volcano. For example, uplift of the ground surface suggests accumulation of magma in underground storage areas, while subsidence can indicate magma drainage. Rapid changes in the rate of deformation often precede or accompany new eruptive activity.

About 20 tiltmeters are currently installed on Kīlauea and Mauna Loa volcanoes. Tilt is especially helpful in tracking sudden variations in deformation, like the changes that can occur as magma begins moving toward the surface. In fact, the USGS Hawaiian Volcano Observatory has implemented automated alarms that notify HVO scientists of real-time changes in tilt that might reflect the impending onset of an eruption.

About 70 GPS stations are spread across the Island of Hawaiʻi, but are focused on Kīlauea and Mauna Loa, currently the two most active Hawaiian volcanoes. These GPS stations continuously record motion of the ground surface in three dimensions. Precise, daily average positions of GPS sites provide an important long-term record of ground deformation that indicates the locations and conditions of magma reservoirs. Real-time GPS positioning helps track the large, rapid movements that accompany changes in eruptive activity.

InSAR is a space-based technique that compares radar data collected from satellites at different times. Variations in the distance between the satellite and the ground are caused by surface displacements between the times of the satellite overpasses. InSAR data provide exceptionally clear “snapshots” of deformation, but only when satellites are overhead (on average, about once a week).

Using this combination of datasets, HVO scientists have tracked inflation of both Kīlauea and Mauna Loa over the past several years.

Mauna Loa began refilling with magma (inflating) immediately after the most recent eruption in 1984. Inflation waxed and waned over the next 30 years—the longest period between Mauna Loa eruptions in historic time. The most recent and ongoing episode of Mauna Loa inflation started in 2014. Unlike previous episodes of inflation since 1984, the current one has been accompanied by significantly increased numbers of shallow earthquakes.

GPS and InSAR data indicate accumulation of magma in a storage system about 2 miles beneath Mauna Loa’s summit caldera and uppermost Southwest Rift Zone. These are also the areas that have been the most seismically active in recent years.

It’s important to note that earthquakes and inflation beneath the volcano’s uppermost SWRZ does not mean that the next Mauna Loa eruption is more likely to occur along the SWRZ. Similar patterns of seismicity prior to the 1975 and 1984 eruptions did not result in sustained activity in the SWRZ.

Mauna Loaʻs neighbor, Kīlauea, has also been inflating in recent years. Similar to Mauna Loa, inflation of Kīlauea is mainly occurring in a magma storage system beneath the volcano’s summit caldera and upper Southwest Rift Zone. But this magma reservoir is more circular and centered beneath the south part of Kīlaueaʻs caldera. Small, cyclic variations in Kīlauea tilt that occur over a few days to a week—so-called deflation-inflation, or DI, events—are superimposed on this overall inflation and result in rather dramatic fluctuations in the summit lava lake level.

HVO has long posted a few plots of tilt and GPS data to the World Wide Web for public viewing, but HVO’s new website includes expanded flexibility and capability for viewing deformation data. Interested users can now track changes at any of HVO’s tilt and GPS stations on the island with a few mouse clicks.

This past week, Kīlauea Volcano’s summit lava lake fluctuated in concert with summit inflation and deflation, with levels ranging around 56–121 ft below the vent rim. On the East Rift Zone, the 61g flow remained active, with lava entering the ocean near Kamokuna and scattered surface breakouts downslope of Pu‘u ‘Ō‘ō, some reaching the base of the pali. These flows do not pose an immediate threat to nearby communities.

Mauna Loa is not erupting. During the past week, small-magnitude earthquakes were recorded, mostly from beneath the volcano’s summit caldera and upper Southwest Rift Zone at depths of about 1–2 miles. Microearthquakes also occurred on the east flank at depths of 3-8 miles. GPS measurements continue to show deformation consistent with inflation of a magma reservoir beneath the summit and upper Southwest Rift Zone. No significant changes in volcanic gas emissions were measured. 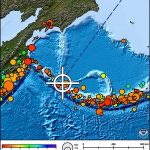 No Tsunami Threat to Hawai‘i After 6.9 Aleutian Islands Quake 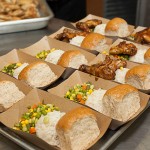