The Outerknown Fiji Pro, Stop No. 5 on the 2017 World Surf League Championship Tour , concluded on Saturday with Round 1 and the opening heat of Round 2 in heavy 6-to-8 foot (2 – 2.5 metre) waves at the world-renowned Cloudbreak. 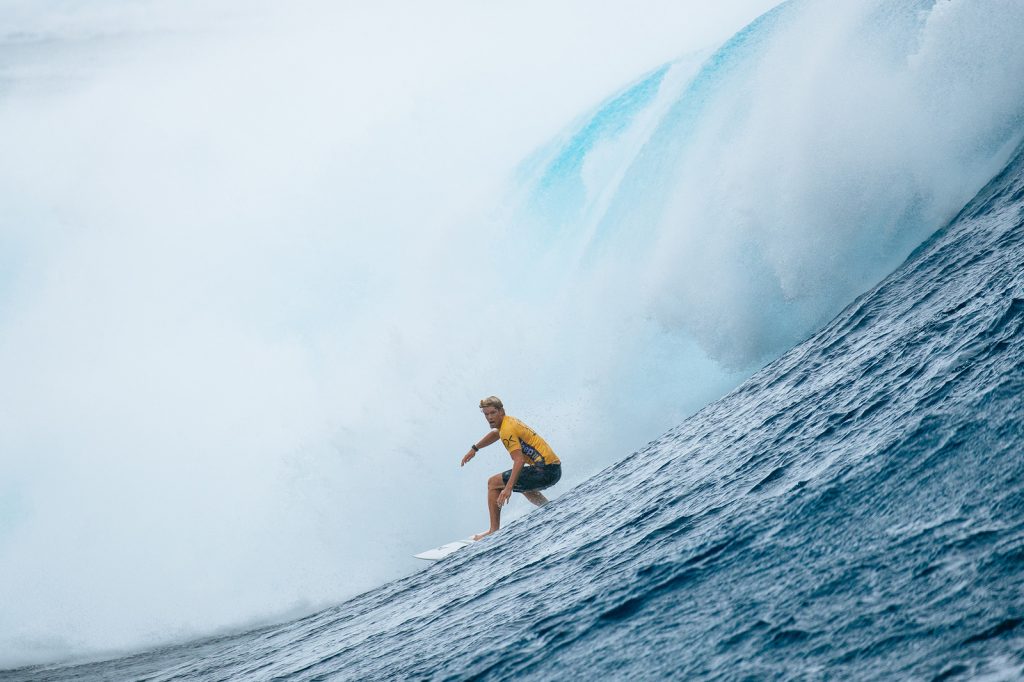 Reigning WSL Champion John John Florence (HAW) navigated his way through sizeable Cloudbreak barrels to win his Round 1 matchup against event wildcard Tevita Gukilau (FJI) and CT veteran Josh Kerr (AUS). Florence, who’s wearing the Jeep Leader Jersey in Fiji, opened up strong with an excellent 8.17 (out of a possible 10), but local favorite Gukilau set the pace with the highest single-wave score of the heat, an 8.30. Florence secured a safe 6.67 to add to his scoreline, while Gukilau just needed to find a 6.54 backup. Gukilau and Kerr were not able to find the waves to combat the top seed.

“The waves are really fun,” said Florence. “There are some good barrels, but it is a bit tricky. Tevita [Gukilau] is ripping. It was a little nerve-wracking in these sneaky conditions. I think I made a mistake at the end by taking off on a pretty bad wave with my priority. I left the door open for Tevita and, luckily for me, another wave did not come.” 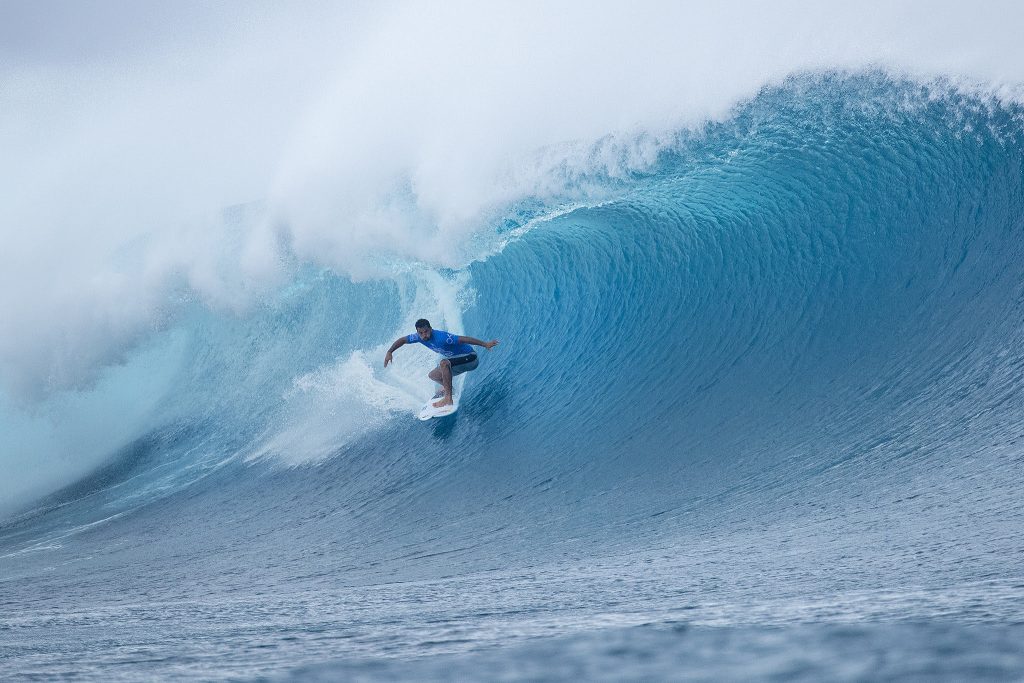 Owen Wright (AUS), current No. 2 on the Jeep Leaderboard, earned his place in Round 3 after taking down rookies Leonardo Fioravanti (ITA) and Ezekiel Lau (HAW). Wright made a few attempts to fire out of the Cloudbreak barrels, but could not quite escape. He finally found his exit on his last attempt to score an excellent 8.50 and take the win.

“That was nice to win the first heat back at Fiji,” said Wright. “It has been my theme this year to build and find the right spot. I finally found the right place on that last one and made it out. That was the one that got me through the heat.”

Gabriel Medina (BRA), two-time event winner, won his Round 1 heat against Wiggolly Dantas (BRA) and replacement surfer Nat Young (USA) in a close battle. The three goofy-footers showcased their forehand attacks in tricky conditions. Medina posted a strong 7.50, but only a 4.50 second-wave score to control the heat by a slim margin. Young and Dantas were not able to challenge the 2014 WSL Champion and will be relegated to elimination Round 2.

“It is good to get the win in the first one, but it is really hard out there,” said Medina. “It is hard to read the wave. I got one that I thought was pretty good, but when I pulled in, I couldn’t come out. It is hard to choose what to do on the wave — turns or barrels. I did manage to get that barrel and make it through. The goofy-footers do a good job here. I love this wave and hope to keep going.”

Michel Bourez (PYF) put on a clinic at Cloudbreak during Round 1 Heat 11 against Miguel Pupo (BRA) and Adrian Buchan (AUS). The Tahitian dominated the match-up with two near-perfect nine point rides for an 18.70 heat total, the highest of the day, and a pass directly to Round 3.

“I went home before I came here and went to ‘Chopes (Teahupoʻo) and surfed some epic waves with my friends, which was a great preparation for here,” said Bourez.

The final heat of Round 1 saw 11-time WSL Champion Kelly Slater (USA), three-time WSL Champion Mick Fanning (AUS), and CT veteran Bede Durbidge (AUS) do battle for an opportunity to skip through to the next round. Fanning gained control with a series of barrels and critical turns for an excellent 8.00 and 5.93. Slater, four-time event winner, locked into multiple tubes but without completion. With time running out for the surfers to challenge, Fanning was able to come away with the win.

“This is the fourth time Kelly [Slater] and I have met this year,” said Fanning. “We don’t know how long we are going to be on tour for so it is great to get as many heats as we can with each other. Kelly is the greatest out here too so it is a huge honor to be out there with him. It was fun. We were pretty relaxed at the start but it got pretty intense at the end.”

Adriano de Souza (BRA), 2015 WSL Champion, will join compatriot Medina after he edged through his heat against Kanoa Igarashi (USA) and injury replacement Bino Lopes (BRA) with a 10.83 combined score.

“I had a strategy out there to try to catch as many waves as possible,” said De Souza. “But, I think that Bino [Lopes] and Kanoa [Igarashi] got better waves than me, but I was able to complete and get the scores to make it through. I want to be the best I can be, staying focused and being the best athlete. I am stoked that things went my way in that one and I will keep putting out my best.”

Frederico Morais (PRT) and Connor O’Leary (AUS) will represent the rookie class in Round 3 after winning their Round 1 heats. Morais successfully took down 2012 WSL Champion Joel Parkinson (AUS) and Brazilian threat Jadson Andre (BRA) in Heat 7 with two 5-point rides. O’Leary took the lead against fellow rookie Ian Gouveia (BRA) and Sebastian Zietz (HAW) for his early win. The remaining members of the rookie class will need to pull out all the stops in order to join Morias and O’Leary in Round 3.

Italo Ferreira (BRA) will skip through to Round 3 after winning the opening heat of Round 1. Ferreira picked up right where he left off after missing the last three events with a solid two-wave combined score over current World No. 7 Kolohe Andino (USA) and rookie Joan Duru (FRA).

Andino was able to bounce out of dreaded elimination Round 2 by knocking out wildcard Gukilau in the first and only heat of the second round.

Event officials will reconvene this morning at 7 a.m. local time to assess the conditions and make the next call.

Surfline, official forecaster for the Outerknown Fiji Pro, are calling for:

An overlapping mix of longer and shorter period SW swell prevails Sunday and Monday with fairly strong, but at least somewhat jumbled, surf at Cloudbreak. The surf will fade Tue-Wed. The next swell of interest is lining up for the end of next week and possibly next weekend, with medium size, mid to longer period energy possible. 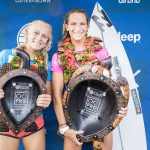 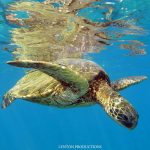