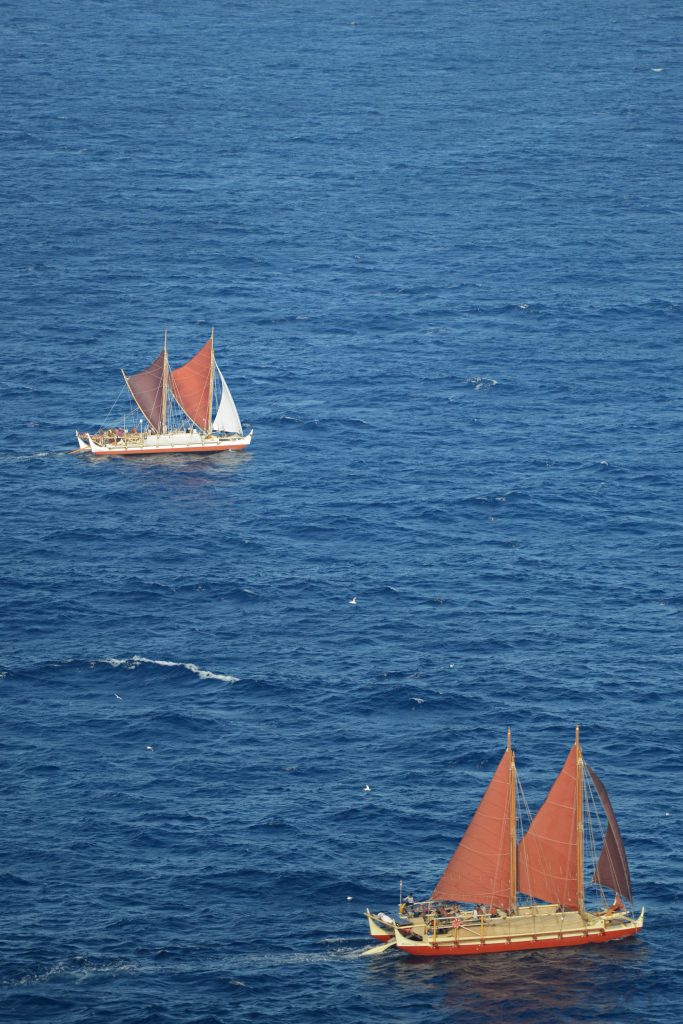 Crewmembers on an MH-65 Dolphin helicopter from Coast Guard Air Station Barbers Point, Oahu, conduct a fly over of the Hōkūleʻa, a Polynesian double-hulled voyaging canoe, Hikianalia and other voyaging canoes, June 16, 2017. The Hōkūleʻa will return home to Oahu, June 17 after being gone for 36 months, sailing approximately 40,000 nautical miles around the world. (U.S. Coast Guard photo by Petty Officer 2nd Class Tara.)

*Check our Maui Now Facebook feed for a live report from Magic Island as Hōkūleʻa arrives from her historic worldwide voyage.

“We recognize the incredible outpouring of public interest and support surrounding the homecoming of the Hōkūleʻa,” said Capt. Michael Long, commander Coast Guard Sector Honolulu and Captain of the Port. “Along with DOCARE we want to ensure that this is a safe, enjoyable and memorable time with our primary focus being on the safety of all waterway users and responders while we honor the cultural significance of this event.”

Saturday residents and visitors to Oʻahu will welcome Hōkūleʻa home from their three year worldwide voyage. The canoes will sail from a mooring to Waikiki and then up the Ala Wai Canal to Magic Island. Hōkūleʻa and the Hikianalia are expected to moor at Magic Island by 9 a.m., with an official welcome ceremony to follow at 10 a.m.

A symbol of cultural revival, the history of Hōkūleʻa is also being shared on this journey to inspire other indigenous cultures. This replica of an ancient Polynesian voyaging canoe was built 40 years ago and revitalized voyaging and navigation traditions throughout the Pacific.

The canoe’s twin hulls allow her to handle large ocean swells and recover easily in the troughs of waves, and her triangular canvas sails can harness winds up to 20 knots. Hōkūleʻa first set out on the Pacific Ocean in 1976.

Through the revival of the traditional art and science of wayfinding-navigating the sea guided by nature using the ocean swells, stars, and wind, Hōkūleʻa sparked a Hawaiian cultural renaissance and has reawakened the world’s sense of pride and strength as voyagers charting a course for our Island Earth.

Since departing Hawaiian waters in May 2014, Hōkūleʻa has sailed more than 31,000 nautical miles and made stops in 16 countries, weaving a “Lei of Hope” around the world. Along the way, more than 200 volunteer crewmembers have helped to sail Hōkūleʻa to spread the message of Mālama Honua (or taking care of Island Earth) by promoting sustainability and environmental consciousness, as well as exchanging ideas with the countries she has visited.

Over the course of their journey, crewmembers have connected with more than 100,000 people in communities across the South Pacific, Tasman Sea, Indian Ocean and the Atlantic Ocean including Samoa, Aotearoa (New Zealand), Australia, Indonesia, Mauritius, South Africa, Brazil, U.S. Virgin Islands and Cuba.

The Mālama Honua Worldwide Voyage reached the East Coast of the United States in March 2016, stopping in Florida, South Carolina, and Virginia before continuing north to Washington D.C., New York City (where it celebrated World Oceans Day at the United Nations on June 8) and New England.

The State of Hawaiʻi Department of Land and Natural Resources Division of Conservation and Resources Enforcement, the City and County of Honolulu Emergency Services Department Division of Ocean Safety, the Honolulu Fire Department, Polynesian Voyaging Society and the Coast Guard are teaming up to provide on-water safety and security for the homecoming.

– For its transit to Waikiki, water safety assets will be enforcing a 500-yard safety perimeter around Hokule’a. Vessels and canoes may be allowed to operate within the 500-yard safety perimeter with the permission of the Coast Guard Captain of the Port, coordinated through the on-scene patrol commander, but will be required to remain a minimum of 100 feet from Hōkūleʻa. All crossing traffic will be prohibited on Hōkūleʻa’s final approach to the Ala Wai Canal.

– The Ala Wai Small Boat Harbor boat ramp will be closed Saturday from 6 a.m. to 6 p.m. Only vessels returning to their berth in the Ala Wai boat harbor will be allowed up the Ala Wai channel adjacent to Magic Island. All motorized traffic will be asked to turn around and stay out of the canal as the canoes and Hōkūleʻa transit up the Ala Wai to their mooring. This is for safety in an area of limited space and restricted maneuverability.

– Following the Hōkūleʻa’s mooring, all motor vessels wishing to transit the Ala Wai will require an escort coordinated through DOCARE.

– Operators of all watercraft (motorized and non-motorized) are reminded to keep a sharp lookout for other traffic and waterway users. They are also reminded not to boat under the influence of drugs or alcohol and to comply with all state and federal regulations regarding life jackets and other safety equipment. 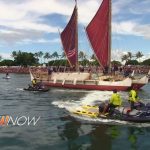 Hōkūleʻa Greeted by Tens of Thousands 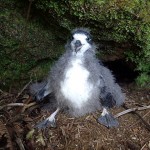