2 Acres of Brush Scorched at Nākālalele

Maui fire crews doused a two acre brush fire on the mauka side of the highway in the Nākālele area of West Maui on Wednesday morning.

The incident was reported at around 10:50 a.m. Wednesday, Aug. 16, 2017 by passing tour helicopters who relayed the information to the control tower at Kapalua Airport.

When Nāpili firefighters arrived at 11:12 a.m., the found the fire burning an area brush about 100 yards in and across from the parking area to the Nākālele Blowhole.

Due to brisk tradewinds, the department’s Air-1 helicopter was dispatched to provide aerial water drops to prevent the fire from spreading upslope.

Maui Fire Services Chief Edward Taomoto said the fire scorched around two acres of heavy brush before it was contained at 12:22 p.m. and called extinguished at 3 p.m.

The cause of the fire was undetermined. There were no injuries or structures threatened.

Firefighters from Nāpili were assisted by a water tanker crew from Lahaina. 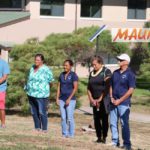 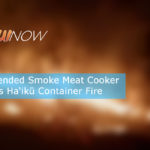