Hawaiian Airlines on Monday celebrated the first scheduled commercial flight of its newest aircraft, the Airbus A321neo, with entertainment and a blessing ceremony at Kahului Airport on Maui.

It was a full flight for guests aboard Hawaiian’s new A321neo service between Kahului and Oakland International Airport.

“We’ve invested in 18 of these state of the art aircraft and they’re smaller than the existing airplanes that we fly to the US mainland which means that we can inaugurate service to new markets that previously we haven’t been able to fly. And today we are also announcing in that vein that we are going to be starting  in May flying from Honolulu to Long Beach California,” said Mark Dunkerley / Hawaiian Airlines, President & CEO.

Hawaiian has so far received two of 18 narrow-body Airbus A321neos that will be delivered to the company through 2020.

“Everything we’ve learned about remodeling the 330 and 747 is incorporated into what we’ve done in the 321,” said Peter Ingram / Hawaiian Airlines, Executive Vice President & Chief Commercial Officer.

“The plane is 40% quieter than other planes that Hawaiian has been flying. We don’t  know exactly the comfort inside because we haven’t been on it yet, but we’re excited,” said Jeff Tucker and Rob Kvidt / Beat of Hawaiʻi editors.

“I’ve been flying I believe going on my 40th year now. I’ve flown just about every plane there is,” said Sandra Kaʻaʻa / Hawaiian Airlines Flight Attendant.  “It’s a little smaller but it’s very exciting and modern and I’m really excited to serve the passengers on this flight and that’s why I’m here for the inaugural flight.”

As more of the A321neo aircraft arrive, Hawaiian will introduce new routes, including Portland (PDX)-Kahului (OGG) on Jan. 18, followed by flights between Oakland (OAK) and Līhu‘e (LIH) on Kaua‘i starting April 11, and Los Angeles (LAX)-Kona (KOA) on the Island of Hawai‘i this summer.

In addition to celebrating Monday’s first scheduled A321neo flight, between Kahului (OGG) on Maui and Oakland (OAK), Hawaiian Airlines also announced it will begin daily non-stop flights between Long Beach (LGB) and Honolulu (HNL) in the summer. The new route, will be inaugurated on May 31 out of Honolulu on the new A321neo aircraft. 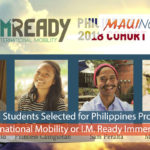 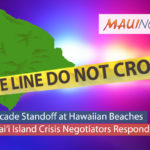