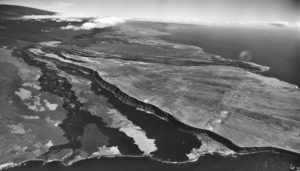 Most of the lava flow (dark black) produced by the April 1868 Mauna Loa eruption can be seen in this aerial photo on the west (left) side of the prominent fault scarp, known informally as the Kahuku pali (formal names are Pali o Mamalu for the upper half and Pali‘okūlani for the lower half of the scarp). The large littoral cone that formed during the eruption, now named Pu‘uhou, is visible on the lower left coastline. Kalae (South Point) is not visible, but is to the right of the photo. The summit areas of Mauna Loa and Kīlauea volcanoes can be seen in the distance. Aerial photo: U.S. Geological Survey, 1954.

Already reeling from a destructive earthquake and deadly tsunami and mud flow on April 2, 1868, Kaʻū residents on the island of Hawaiʻi hoped for a reprieve, but it was slow to come.

Continuing from last week’s Volcano Watch, here’s the rest of the story:

The events began on March 27, 1868, with an eruption in Mokuʻāweoweo, the caldera atop Mauna Loa. Several people reported hearing an explosion, then seeing a column of smoke rising thousands of feet above the summit, and some could see molten lava. Soon afterward, a roaring sound was heard and Pele’s hair began falling in Kaʻū.

On March 28, a strong earthquake toppled the walls of four or five stone churches and destroyed Captain Brown’s stone house in Kahuku. (The exact location is unknown, but his house was possibly in the vicinity of mile marker 71 on today’s Highway 11.)

Over the next few days, gas plumes could be seen from locations migrating down Mauna Loa’s Southwest Rift Zone until, on March 29, they seemed to be issuing from a location just above the site of Captain Brown’s house. It appeared that volcanic gas, but no lava, was being released from a fissure as it slowly opened to the southwest. Frequent earthquakes were also felt.

On April 2, the great Kaʻū earthquake struck, and the subsequent tsunami and mud flow took the lives of 77 Hawaiians. Aftershocks continued in Kaʻū and Kona. But the drama was not yet over.

The schooner “Odd Fellow,” cruising along the Puna and Kaʻū coast after the great quake, reported nearly complete devastation of coastal settlements. On April 6, it anchored on the Kahuku coast, where, the next morning, passengers found the deck covered with “very fine ash.”

After sailing northwest to Kailua, the same passengers saw the start of an eruption: “At six p.m. a volume of flame shot up from the mountain Loa… It reached the sea … at nine and a half p.m. when an immense body of steam at once arose, through which flashes resembling lightning were constantly daring as long as we were in sight.”

The eruption started 10 miles from the coast, with lava flows apparently advancing to the ocean west of Kalae (South Point) at a rate of 2.7 miles per hour—nearly the speed of a brisk walk.

On the evening of April 7, Captain Brown and his family, already displaced by the March 28 earthquake, were awakened by “an explosion and a terrific roar.” “Lava was seen coming down rapidly upon their doomed dwelling. The family, and the natives about the premises, ran for their lives.” 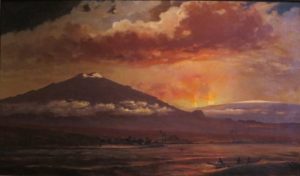 What was left of their house was quickly consumed by lava. Fountains of lava were estimated to vary from 500 to 1,000 feet high just up-slope of the Brown residence. The entire island “was enveloped in smoke” and tephra was deposited inches deep within 10-15 miles of the eruption site along Mauna Loa’s lower Southwest Rift Zone. The eruption lasted four to eight days and built a large cone at the coast, now named Puʻuhou.

Fortunately, the eruption took no lives, but over 100 head of cattle were lost, and all of Captain Brown’s ranch buildings and many acres of valuable grazing lands were destroyed. Within days, “volcano smoke,” what we now call “vog,” reached Honolulu.

On April 9, news of the extensive damage and loss of life on the Island of Hawaiʻi also reached Honolulu. In response, Kamehameha V personally led a relief effort that landed in Hilo on April 15, the first of several stops along the Puna and Kaʻū coastline. At each stop, victims sought comfort, both spiritual and financial, directly from their sovereign.

Kamehameha V granted aid to an estimated 800 individuals before returning to Honolulu on April 23. Private and public aid followed with Dowager Queen Emma, the King’s sister-in-law (and founder of Queen’s Hospital), raising thousands of dollars for the “Kaʻū Relief Fund.”

Over the next few months, the Kaʻū Hawaiian community rebuilt what they could from the aid provided. But Captain Brown and his family, as well as many other foreign families, left the island after the great Kaʻū earthquake, never to return.

This past week, Kīlauea Volcano’s summit lava lake level fluctuated with summit inflation and deflation, ranging about 79–98 feet below the vent rim. On the East Rift Zone, the 61g lava flow remained active with breakouts on the upper part of the flow field, closer to Pu‘u ‘Ō‘ō. There were no active lava flows on the pali, coastal plain, or entering the ocean. The 61g flows do not pose an immediate threat to nearby communities.

Mauna Loa is not erupting. Rates of deformation and seismicity have not changed significantly over the past week, but persist above long-term background levels. Only a few small-magnitude earthquakes occurred beneath the volcano, primarily at depths shallower than 8 miles. GPS and InSAR measurements continue to show slow deformation related to inflation of a magma reservoir beneath the summit and upper Southwest Rift Zone.

No earthquakes were reported felt in Hawai‘i this past week. 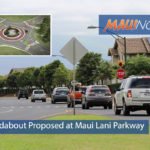 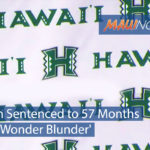 Man Sentenced to 57 Months in Jail for 'Wonder Blunder'