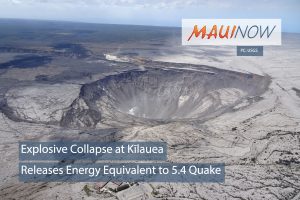 PC: USGS (file photo July 13, 2018). USGS scientists captured this stunning aerial photo of Halema‘uma‘u and part of the Kīlauea caldera floor during a helicopter overflight of Kīlauea’s summit on July 13, 2018. In the lower third of the image, you can see the buildings that housed the USGS Hawaiian Volcano Observatory and Hawai‘i Volcanoes National Park’s Jaggar Museum, the museum parking area, and a section of the Park’s Crater Rim Drive. Although recent summit explosions have produced little ash, the drab gray landscape is a result of multiple thin layers of ash that have blanketed the summit area during the ongoing explosions.

Earlier this morning, explosive activity near the ocean entry point at Pohoiki damaged a tour boat vessel and injured at least 22 [1] individuals aboard.

According to the USGS, the quake was located: