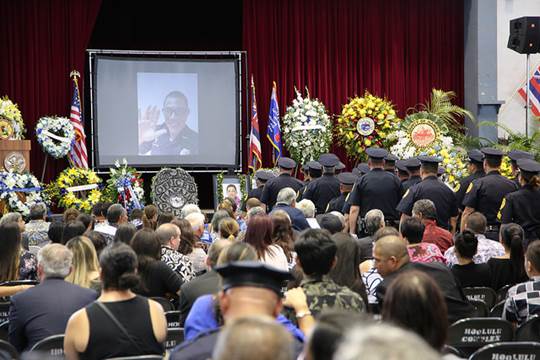 Thousands of people were in attendance at the Hilo memorial service on Saturday to honor fallen Police Officer Bronson Kaliloa, who was shot in the line of duty and died on July 18.

Kaliloa was a 10-year veteran of the police force, and served in the Puna Patrol Division which has provided around the clock support to the community dealing with ongoing volcanic activity and lava flows from Kīlauea.

Officer Bronson Kaimana Kaliloa, was a 1990 graduate of the Waimea High School located in Waimea, Kauaʻi. He joined the Hawaiʻi Police Department on Aug. 1, 2008 at the age of 36, and was initially assigned to the South Kohala Patrol Division.

In December 2010, he transferred to the Puna Patrol Division, and in 2014, his professionalism was honored by his peers when he was selected as the 2014 Puna Patrol Officer of the Year.

During the service, Congresswoman Tulsi Gabbard presented congressional certificates to Officer Kaliloa’s wife Casey and to Hawaiʻi County Police Chief Paul Ferreira with a tribute to Kaliloa’s life that is printed in the Congressional Record. 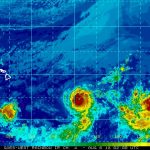 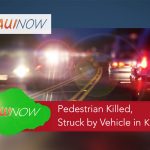