See video of damage from a multi-vehicle crash in Kula that's spurred an attempted murder investigation, find out how much your power bill will soon be going up, and learn how Maui's voter turnout compares to other islands and where you can see all our election results. Those stories and more in our headline recap with Maui Now's Kiaora Bohlool. #MauiNowHeadlines #MauiNowNews

Authorities have launched an attempted murder investigation surrounding a multi-vehicle crash in Kula on Wednesday, August 15th.   A Maui Police SUV was involved in the accident, which happened around 1:30 p.m. on Kula Highway near the Lower Kula Road intersection.  According to police reports, officers were responding to a call about a domestic abuse in progress when they learned the alleged male offender had fled the area in a blue Toyota pick-up truck.  Police say the suspect, 35-year-old Garette Moriwake of Kula, drove the blue truck toward the officers from the opposite direction, then veered across the center line and collided into a Police SUV, before climbing an embankment and crashing into tractor trailer truck which had pulled off on Kula Highway.  You can see the aftermath in this video from the police department.  Officer Max Kincaid, who was driving the Police SUV, went to the hospital for treatment of injuries sustained in the collision before being released.  Moriwake was placed under arrest and transported to the hospital to also be treated for injuries.  Wendy Osher will continue to have the latest for you on this incident in our News section.

Maui police have launched an investigation into a report of an HC&S worker being electrocuted while fixing a power line on Tuesday August 14th.  The incident was reported on North Firebreak Road off Haleakalā Highway.  Kahului patrol officers responded to the incident to find a 61-year-old man unresponsive at the scene, and after police, fire crews and medics administered lifesaving efforts, he was taken to the hospital in critical condition.  Police say his condition has since stabilized.  The case is currently classified as a miscellaneous accident.

Your electric bill may soon be increasing by around five dollars a month.  The Hawai‘i Public Utilities Commission has approved a 3.8% interim base rate increase for Maui Electric Company.  That’s less than the 9.3% increase it originally requested and the first base-rate increase in more than six years.  This goes into effect August 23rd, and Maui Electric says extra revenue will go toward operational improvements and system upgrades.

And of course, there was a primary election on Saturday, August 11th!  Maui’s voter turnout was 36.2% — the highest for a primary election in Maui County in two decades, but still the lowest in the state behind Kauaʻi, Hawai‘i Island and Oʻahu.  The election results move some new names and familiar faces ahead to the general election in November.  See the complete results for Mayor, City Council, State Seats and more in our Election section. 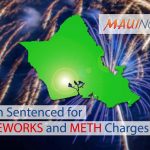 Man Sentenced to 7 Years, 4 Months for Fireworks and Meth Charges 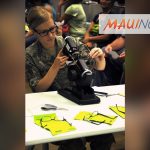