THE FLOOD ADVISORY FOR THE ISLAND OF MAUI IN MAUI COUNTY IS
CANCELLED.

At 2:31 p.m., radar indicated heavy rain along the north shore of Maui near Ha‘ikū.

Rain was falling at a rate of one-and-a-half-inches per hour.

Locations in the advisory include but are not limited to Kahului, Kahakuloa, Pu‘unene, Hali‘imaile, Pauwela, Waikapu, Kipahulu, Pa‘ia, Makawao, Wailuku, Waiehu and Haiku-Pauwela.

Stay away from streams, drainage ditches and low-lying areas prone to flooding.

Do not cross fast flowing or rising water in your vehicle, or on foot. Turn around, don’t drown.

This advisory may need to be extended beyond 5:30 p.m. if heavy rain
persists.

A Flash Flood Watch is also in effect for all Hawaiian Islands. 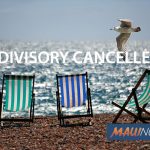 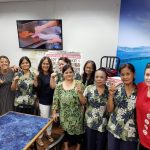