The Hawai‘i Bar Association and the Supreme Court of Hawai‘i recognized Lance D. Collins, a solo private practitioner with his practice primarily on the island of Maui, for his pro bono counsel work. Collins is lead counsel on the federal court case currently in litigation aimed at requiring the owners of the 142-unit low-income Front Street Apartment complex in Lahaina to keep the rentals affordable.

After receiving more than $20 million in public funds in return for promising to keep the complex affordable for 51 years, the owners—Front Street Affordable Housing Partners—are attempting to end the affordability requirements after only 15 years. If permitted to go forward, the conversion will result in the loss of housing for the 300 tenants who live in the complex while increasing the value of the complex by up to $44 million.

“Hawai‘i’s housing costs are among the highest in the nation,” said Victor Geminiani, founder of LEJ. “We have the lowest wages when adjusted for cost of living, the highest rate of chronic homelessness, and the highest rate of overcrowding in housing. Nearly half of Hawai‘i tenants live in housing that is, by definition, unaffordable—spending more than 35 percent of household income on rent—and the problem is getting worse. For every two units needed to satisfy increases in demand, only one is being built. Housing costs are increasing at more than twice the rate of increases in wages. Hawai‘i cannot afford to lose its existing affordable housing stock. That’s why Lance’s work with the Front Street tenants is so important.”

Monthly rents for a one-bedroom unit at the complex are capped at between $885 and $1,062 depending on the income of the tenant. Given the crisis in the availability of affordable housing in the state, and on Maui in particular, it will be impossible for most tenants to find alternative housing, and many will be faced with the prospect of becoming homeless.

Collins has a long history of offering his skills to those who need his help. Recent pro bono work includes challenging Office of Elections practices that disenfranchised voters, challenging the Department of Health’s failures to protect senior citizens in care homes, contesting agency practices that allow fishing ships to confine their non-immigrant fishers to boats when docked, protecting Native Hawaiian family kuleana lands, and advising pro se parties in preparing and conducting contested cases among other cases and activities. Collins was presented with the award on October 25, 2018. 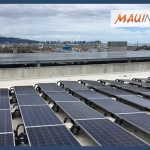 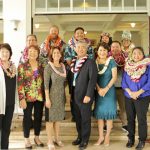