Maui police arrested a man in Wailuku who was reportedly observed operating a stolen truck on Tuesday night, Jan. 29, 2019.

According to police reports, a white 2018 Toyota Tacoma was reported stolen from a home on Upalu Street in Wailuku at around 5 p.m.

Several hours later, at around 9:50 p.m., the truck was observed being driven on Onaha Place, police said.

Police stopped the vehicle and arrested the driver, identified as Tibor, according to Maui Police Lieutenant Gregg Okamoto.

According to court documents, Tibor was being held in lieu of $11,000 bail. He made an initial court appearance on Tuesday and has been ordered to appear for a preliminary bail hearing on Friday afternoon, Feb. 1, 2019. 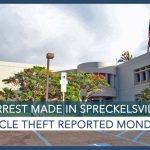 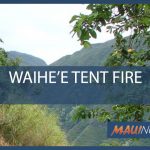 Man Treated for Burns to Hands in Waihe‘e Tent Fire