The National Weather Service in Honolulu has issued a flood advisory for the island of Maui until 10:45 a.m. on Friday, May 3, 2019.

The NWS says that at 7:51 a.m., radar showed heavy rain over windward east Maui falling at a rate of 1 to 2 inches per hour.  Locations in the advisory include but are not limited to: Kīpahulu, Huelo, Nāhiku and Hāna.

In East Maui, we have reports of heavy rain this morning in the area of Hāna Farms near mile marker 32 near the Hāna Airport.  At around 7:15 a.m., residents reported heavy rain falling in the area and partial flooding the roadway.

In this video, provided by Aerial Images Maui, there was light rain this morming in the Waikāne and Nāhiku areas and minor debris along the Hāna Highway.

Area residents report that heavy traffic is anticipated due to the Sarah Joe Regatta.

Forecasters with the NWS say an out of season cold front will approach the state from the northwest today, then advance down the island chain Saturday through early Sunday. 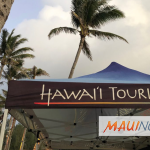 Report: Visitor Spending on Maui Drops Despite Rise in Arrivals 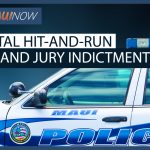