A brush fire burned an estimated half acre at the Pūlehunui Industrial Park before being contained on Sunday afternoon, June 30, 2019.

The fire was first reported at 12:06 p.m. in the area of Nopu Street, near a radio tower.

Fire crews gained containment at 12:30 p.m., and remained on scene where ground crews continued to mop up until 3:55 p.m.

Fire officials say the cause of the fire is undetermined. 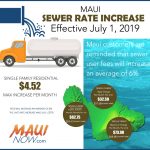