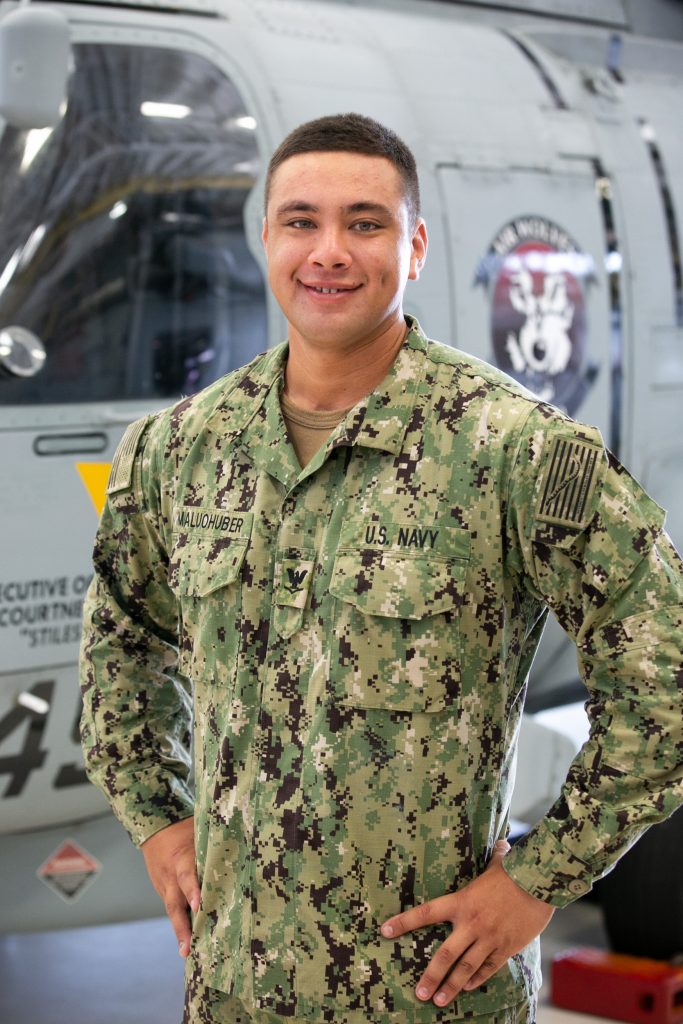 A 2009 Kamehameha Schools graduate from Maui is serving with a U.S. Navy helicopter squadron that flies the Navy’s newest and most technologically-advanced helicopter.

Petty Officer 3rd Class Kamaki Maluo-Huber credits much of his success from lessons he learned growing up in Wailuku.

“Growing up in my hometown taught me how to get knocked down and get right back up because nothing is given to you, you have to earn it,” said Maluo-Huber. “It helps me while I’m serving because I’m always putting my best foot forward and leading by example.”

Maluo-Huber is a 2015 graduate of the University of Hawaiʻi with a degree in marine science.

Maluo-Huber is an aviation machinist mate with the “Airwolves” of Helicopter Maritime Strike Squadron 40, a Mayport, Florida based squadron that operates the Navy’s next generation submarine hunter and Anti-Surface Warfare helicopter, the MH-60R Seahawk. Each helicopter is nearly 65 feet long, may weigh up to 23,500 pounds (max gross) and can travel over 120 miles per hour for nearly 320 miles on a tank of gas.

As an aviation machinist mate, Maluo-Huber is responsible for maintenance and upkeep of the MH-60R helicopter.

According to Navy officials, the MH-60R is the most capable multi-mission helicopter available in the world today. It is used for a variety of missions, including hunting and tracking enemy submarines, attacking enemy ships, search and rescue, drug interdiction, delivering supplies and supporting the Navy’s special operations forces.

It is replacing the Navy’s older helicopters because of its greater versatility and more advanced weapon systems.

“I always wanted to serve and my mom wanted me to go to college, so after I graduated I decided to enlist,” said Maluo-Huber.

Maluo-Huber said they are proud to be part of a warfighting team “that readily defends America at all times.”

“My proudest accomplishment while serving is making rank,” said Maluo-Huber. “I wasn’t in for a long time but it was still something I had to put the work in towards earning.”

Sailors’ jobs are highly varied within the squadron. Approximately 297 Navy men and women are assigned and keep all parts of the squadron running smoothly. This includes everything from maintaining helicopter airframes and engines, to processing paperwork, handling weapons and flying the aircraft.

“Our priorities center on people, capabilities and processes, and will be achieved by our focus on speed, value, results and partnerships,” said Secretary of the Navy Richard V. Spencer. “Readiness, lethality and modernization are the requirements driving these priorities.”

As a member of one of the U.S. Navy’s most relied upon capital assets, Maluo-Huber and other sailors “know they are part of a legacy that will last beyond their lifetimes.”

“Serving to me means representing the Navy to the best of my ability,” said Maluo-Huber. “I want to be a positive influence to the public representing my branch.”