Soon after creating a few clothing items, Davis started to design hats, dresses, and accessories. She officially launched her clothing company, PōMahina Designs, in 2009 and dedicated herself to the business full-time in 2015.

Since then, Davis has been maintaining the business on her own and contracts a part-time team for shows and events.

Now, the years of hard work are finally paying off, as Davis will soon be the first-ever fashion designer from Hawaiʻi to present her products at the London Fashion Week next month.

“It’s exciting and humbling at the same time. Humbling in the sense that I want to make sure I represent our island well, I want to make our families proud and our kūpuna smile,” Davis said.

“I also hope it inspires many who have little resources that we can do anything…Molokaʻi has always been able to persevere with little modern resources. Many don’t recognize that we are a small island in the middle of Hawai’i with no malls, street lights, and anything over three stories.”

As a native Hawaiian, Davis believes it is her kuleana, responsibility, to perpetuate the traditions of her people, which are the main inspiration for her designs.

“The patterns and prints of PoMahina are a reflection of ancient wisdom expressed through clothing,” Davis said. “When people wear and see the prints, the stories of the ancestors are alive again, that which lies dormant is now activated.”

According to Davis, Missing Polynesiaʻs clothing was showcased at the 2015 London Fashion Week, but the designer couldnʻt make it to the show.

PōMahina Designs will have the opportunity to close out one of the shows at fashion week next month.

Davis said this opportunity comes as the business begins to expand. 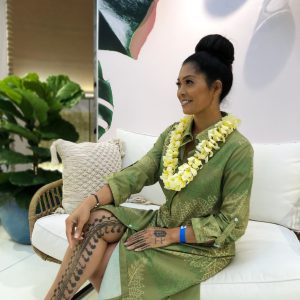 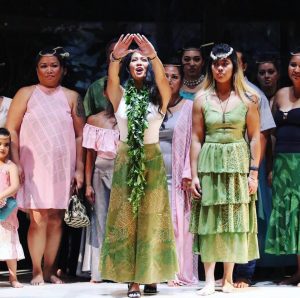 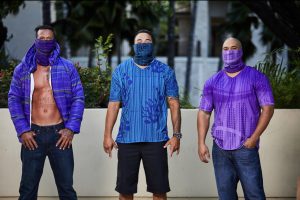 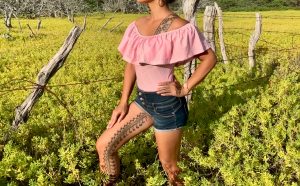 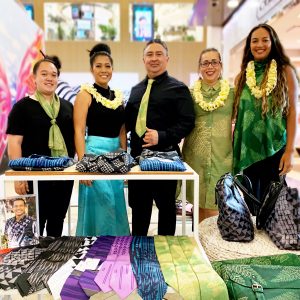 Davis pictured with a few of her crew members behind the scenes at a fashion show in Waikīkī. Photo Courtesy: Kanoelani Davis.