A three-year-old girl sustained non-life threatening injuries after being struck by car driven by her 11-year-old brother in East Maui.

Hāna Patrol Officers were dispatched to the Hāna Medical Center on Monday night, Aug. 26, 2019 to investigate the incident.

Maui police say an investigation found that the boy was asked by his 37-year-old father to move the family car while his father mowed the lawn.

Police say the boy pressed the gas pedal, believing it was the brake, which accelerated the vehicle forward colliding into his sister, who was in front of the car. 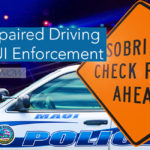