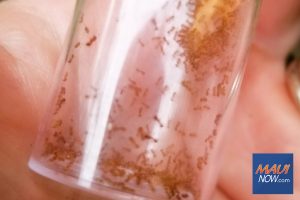 Waiheʻe Valley residents are “strongly urged” to attend an informational meeting next month about a little fire ant (LFA) infestation discovered on several properties close to the river.

Without residents’ assistance to locate LFA in the area quickly the fear by the Maui Invasive Species Committee (MISC) is that the ants may spread downstream. The informational meeting is scheduled for  6 p.m. on October 9 at Waiheʻe Elementary School.

“It’s extremely urgent because we do know ants move downstream during flood events,” said Lissa Strohecker, MISC Public Relations and Education Specialist. “We want people to come because we are going to need assistance from the community, we just want everyone to check their property.

“It’s how these things are found, from citizen reports, the more people testing the faster we can find them.”

Finding the LFA on properties requires a simple test using chopsticks and peanut butter, as demonstrated in this MISC video.

The LFA in Waiheʻe Valley was first discovered late August 2019 when it was reported to MISC by a resident who had been “stung on her neck and under her collar while working near fruit trees” according to a MISC press release.

MISC staff visited her property and officially identified the ants under a microscope as little fire ants or Wasmannia auropunctata.

The next day, a team from the Hawaii Department of Agriculture (HDOA) and MISC conducted surveys in the area, which is adjacent to the Waiheʻe River. Initial surveys indicate that LFA are present on three properties.

According to MISC the Waiheʻe Valley infestation is estimated to cover four to five acres, mostly in overgrown vegetation and away from homes. Little fire ants were detected next to the river, raising concerns that the ants may have moved downstream; however, preliminary riverside surveys below the infestation zone did not detect any LFA.

Area residents who have encountered stinging ants—particularly those who have been stung on their neck and upper body after working with or under vegetation – are urged to report suspect ants by contacting either the Maui Invasive Species Committee at 573-MISC (6472), the Hawaii Department of Agriculture on Maui at 873-3080, or online at 643PEST.org.

This infestation is the fourteenth detection of little fire ants on the Valley Isle since 2009 and the second detection of LFA on Maui this year, following the April detection in the Happy Valley neighborhood of Wailuku. MISC is actively treating five sites; the Waiheʻe Valley site will be the sixth. After undergoing a rigorous treatment regimen, little fire ants are thought to be eliminated from other sites, though MISC continues to survey to ensure they are gone.

The source of the infestation is unknown at this time and there is no known connection between this one and a previously-infested site at a farm in Waiheʻe. Based on the size of the new infestation, experts estimate little fire ants have been present for five or more years.

MISC officials said that people often discover the ants by brushing against heavily-infested bushes or in windy conditions when the ants fall off plants or trees. Unsuspecting victims of the “ant rain” are left with painful stings and animals can be blinded.

“On Hawai‘i Island, little fire ants are now widespread and residents describe being at their ‘wit’s end’ and unable to take their keiki to the places they learned to fish, hunt, surf, and hike,” according to MISC officials. “Left unchecked, this species will affect Maui’s environment, and agriculture, and forever change our quality of life.”

At the meeting at Waiheʻe Elementary School on the 9th officials from MISC and state Department of Agriculture will share information on the threat of little fire ants, the current status of Maui’s infestations, the plan for treatment, and community efforts to prevent the spread. To learn more about LFA, including how to collect samples, go to www.stoptheant.org.