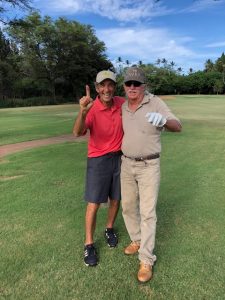 According to Maui County Club officials, they had two members who both hit holes in one within a 10 minute span of each other on Wednesday, September 25.

First Dr. Johnny “Blade” Mills stepped up to the tee on the 16th hole and used an 8 iron to hit his Pro V1X golf ball 109 yards on a par 3. The ball landed on the green and rolled to the edge of the cup and finally dropped.

As Mills celebrated another member putting the 15th hole came by to congratulate him and asked what club he used. Mills told Alan Grodzinsky and then Grodzinsky also used an 8 iron to hit another Pro V1X ball. The ball landed and two took bounces then also dropped into the hole.

According to the National Hole in One Registry website there are 450 million rounds of golf played every year in the U.S. but only 1 to 2 percent of golfers score a hole in one during the year.