Captains aboard a tour boat off the coast of Kauaʻi may have spotted the first humpback whale of the season.

The Holo Holo Charterʻs Adventure II was about a mile off Keʻe Beach when the captains saw the whale.

According to a press release from the National Oceanic and Atmospheric Association, the whale breached about three times, allowing the captains enough time to identify it as a medium-sized humpback.

Humpback whale season in Hawai‘i generally runs from November through May. However, whales may be encountered in small groups during other months.

Thousands of humpback whales return to Hawaiian waters each year to breed, give birth, and nurse their young.

In light of the sighting, NOAA is reminding the public to keep a safe distance from these animals.

Boaters are asked to post a lookout throughout the year, not only during whale season.

According to NOAA, an extra set of eyes scanning the waters ahead and to the side of a boat can prevent collisions with marine life, obstructions, divers and other vessels. Slower speeds may also reduce the risk of collisions with the animals.

Federal regulations prohibit anyone from approaching within 100 yards of whales when on the water, and 1,000 feet when operating an aircraft.

Scroll Down to Read 106 Comments 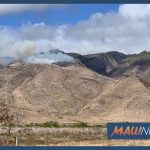 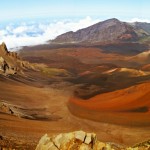