Hale’iwa, O’ahu (World Surf League) — Jack Robinson (AUS) earned an exalted victory on Tuesday at the Vans World Cup of Surfing with the best Final heat total in Sunset Beach history and claimed the last spot on the World Surf League (WSL) Men’s 2020 Championship Tour (CT) by way of the Qualifying Series (QS). The second event of the Vans Triple Crown of Surfing and final WSL QS competition of the year, Robinson earned 10,000 points to surge from No. 22 on the QS to No. 5 and edge out runner-up Ezekiel Lau (HAW) from CT requalification. Robinson will join the world’s best for his very first run on the dream tour.

A key element to his success, Robinson found choice barrels under priority and racked up a colossal 19.07 two-wave total in the Final, touted as the greatest result in the entire history of competitive surfing at Sunset Beach, which spans over four decades.

“I was on point,” said Robinson. “We’re ready. It was a while coming. A lot of build-up to this. I felt like I wanted to get on [the CT] earlier but it happens when it happens. Time is the owner of it sometimes. Been working really hard this year clearing things up in my mind and I’m in a good place. I’m ready!” 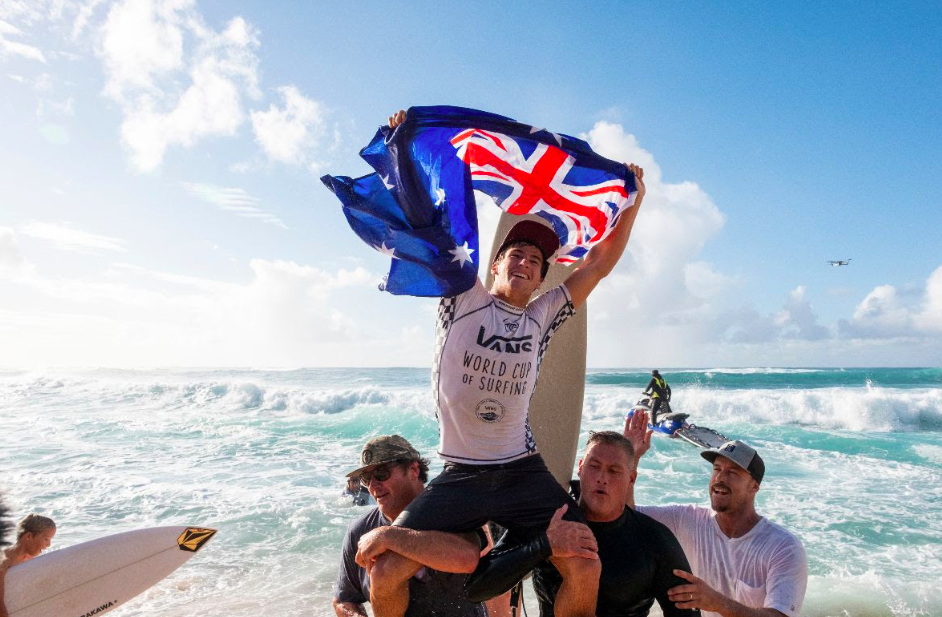 The final was a hefty mix of talent including Ethan Ewing (AUS) and Maui’s Cody Young (HAW), who took third and fourth place respectively, and held heavy implications for all four athletes. Lau’s loss was the biggest of all as his second-place result put him just shy of the points needed to re-qualify. The Hawaiian was on fire throughout the entire competition and won every heat up until the Final, but needed to win the event to ascend to the 2020 CT.

Robinson’s brilliance was undeniably incomparable. He found barrels by design and went to work early, only to throw away 7-point rides for near-perfect 9’s. With fifteen minutes left in the 35-minute heat, Robinson hunted a gem and stalled to maximize his time in the tube for a 9.40 to combo the field. Straight offshore easterly winds groomed Sunset’s barrel section as the north swell delivered waves in the 6-8ft. range and Robinson went on to post a 9.67 for a powerful turn in the pocket followed by another throaty barrel. He made a statement by absolutely dominating the field with the event’s highest single wave score, heat total, and the win.

“I’ve been surfing out here a long time, I don’t know, maybe Sunset just threw me a lucky charm,” continued Robinson. “It came together, that’s how I wanted a final to come together. I feel like I built up this whole time, I wasn’t really surfing my best the whole time and then when the sections came, then I did what I could. I did the best I could for that wave so I felt like I peaked at the right time.”

Third place finisher Ewing ended the QS season No. 8 after finaling at the Hawaiian Pro, the first stop of the Vans Triple Crown, and again today at the Vans World Cup. He added 13,000 points to his QS ranking and will jump back on tour in 2020 for his second year, his first being in 2017.

“I had a really low rating coming in to here so I definitely wasn’t planning on qualifying,” said Ewing. “I just wanted to get a few good results and a few good heats and learn a lot more about the waves over here.”

With his two excellent results, he established himself as the 2019 Vans Triple Crown leader, which will be cinched up at the third and final event, the Billabong Pipe Masters from December 8 – 20. Ewing will have the opportunity to go further in the race since he earned a spot in the Pipe Invitational, a high-stakes trials event that awards the two top surfers a spot into the Billabong Pipe Masters.

“It’s pretty crazy, I wasn’t expecting to be in the lead, I just wanted to surf well over here and finish the year better than I started,” Ewing continued. “I think I’ll be in the trials for Pipe and yeah, just see how it plays out. But not having high expectations of the Triple Crown.”

Former Vans Triple Crown of Surfing Rookie, Ewing passed the torched onto Morgan Cibilic (AUS), who is now a distinguished name on the North Shore after claiming the 2019 Vans Triple Crown Rookie for the top first-timer performance. The rookie field began with 23 surfers at the Hawaiian Pro and pared down as frontrunners pulled ahead to eventually culminate with Cibilic, thanks to a 13th place finish and a 25th at Haleiwa.

“It feels amazing,” said Cibilic of the award. “I was coming over here and that was my major goal, just to win the Rookie of the Vans Triple Crown to take my mind off the chance of possibly qualifying. I’m not there yet so I have to keep going. Bit of pressure lifted off my shoulders so I’m stoked.”

The Merewether local earned one of the best single wave scores of the event, a near-perfect 9.17 on a challenging, long barrel ride that ended in a white water battle that saw him stay on his feet and emerge victorious. The result cemented his Rookie status which will create momentum as he heads into a new year on the QS.

“I don’t think any of this year has even sunk in,” Cibilic said. “I came into the start just grinding out the 1,000’s and all of a sudden I’m here. I’m over the moon. Al (Hunt) just gave me the news when I handed back my rashy. It’s unbelievable and hopefully I can keep pushing through, but I’m just stoked to be here.”

South Africa gained another CT representative as Matthew McGillivray (ZAF) ascended up the QS to the No. 4 spot to solidify his place among the world’s best next year. McGillivray earned third place at the Hawaiian Pro and with his Quarterfinal finish, he is officially safe and joining the world’s top 34 for the first time when the 2020 CT begins in late March.

“It’s so cool knowing that I’ve achieved my big goal and now the waves are firing out here for the finals day at Sunset,” said McGillivray. “I heard that it was official that I was going to be on the CT next year. It was such a rush of emotions, such a relief. It’s been my biggest dream and to be able to achieve that is just hard to describe. Such an amazing experience to be here and how everything has worked out. So many good, happy emotions… Jordy Smith has been the whole inspiration for South Africa for over 10 years, to be able to join him on tour is incredible.”

In the heat of his career, finalist Cody Young (HAW) took out eleven-time World Champion and two-time Vans Triple Crown Champion Kelly Slater (USA) along with QS veteran Jadson Andre (BRA) in Round 4 with the highest wave score of the matchup, an 8.00. Young picked off a clean wall and laid into a cutback under the lip, then raced down the line for a deep and clean inside North bowl barrel.

The Maui young gun started the year with a win at the Sunset Open Men’s QS 1,000 in January followed by a fifth place at the Volcom Pipe Pro Men’s QS 3,000. His fourth-place finish marks his best result by far in four years competing in the Vans Triple Crown and it appears the powerful regular-footed is just getting started.

The 2019 Men’s QS season is officially over and the top ten surfers have been confirmed for the 2020 CT. The WSL now moves to world-famous Pipeline for the Billabong Pipe Masters, the final event of the Vans Triple Crown and culmination of the 2019 Men’s CT. The holding window opens Sunday, December 8, and will begin with the Pipe Invitational, a 32-man format trials event that will honor the top two placing athletes a slot into the Billabong Pipe Masters.