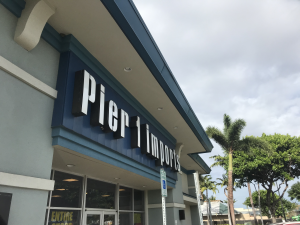 Pier 1 Imports Inc. will soon be closing all seven of its Hawaiʻi locations, including its two-decades-old Maui Marketplace store.

The announcement came as a shock to shoppers and staff members at the Kahului location.

“I was so excited when they came here years ago and it just makes me heart sick that they’re closing,” Morgan said.

Jared Guillermo, the storeʻs assistant manager, was surprised by the planned shutdown since the Maui location is “one of the higher grossing stores in Hawaiʻi.”

“We thought we were one of the few that were gonna make it through, Guillermo explained. “We have a lot of, you know, guests and customers that come in year round.”

Guillermo said that the store has already entered an eight-week liquidation process earlier this month, with all items marked down 30 percent.

While the company has not announced the storeʻs last day, Guillermo expects the location will be shuttered by the end of January or February.