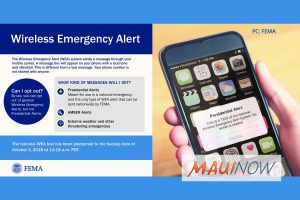 The ALERT Act, which was introduced after the false emergency alert that went out across Hawai‘i in January 2018, aims to improve the emergency alert system and give the federal government the primary responsibility of alerting the public of a missile threat.

“These alerts save lives, so we have to get it right,” Schatz said in a press release. “The federal government is always the first to know of a missile threat and they should be responsible for telling the rest of us.”

State and local governments have been largely responsible for alerting the public of threats from natural disasters and severe weather.

“The false alarm in Hawai‘i highlighted some of the weaknesses in the state’s emergency alert system, which had a poorly designed user interface and did not have a sufficient verification system or computer redundancies to help prevent mistakes,” the press release read.

“The incident made clear the need for federal standards in the system and called into question the state’s responsibility to issue a missile alert.”

Schatz hopes the legislation will strengthen the way state and local governments use the Integrated Public Alert and Warning System, the FEMA platform used by emergency management professionals across the country to issue warnings.