Past Winners to Compete in Sentry Tournament 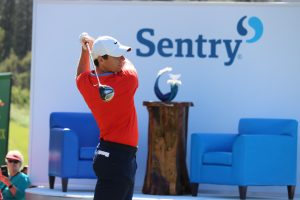 Sentry Tournament of Champions past winners Dustin Johnson, Justin Thomas, Xander Schauffele and Patrick Reed have committed to play in the 2020 Sentry Tournament of Champions when the event returns to The Plantation Course at Kapalua from Jan. 1 to 5.
Dustin Johnson, 20-time winner on the PGA Tour, qualified for the champions-only event with a victory at the World Golf Championships-Mexico Championship in February. Johnson defeated Rory McIlroy for his sixth career WGC title when he finished at 21-under 263. The two-time Sentry Tournament of Champions winner (2013, 2018) will make his 10th appearance at The Plantation Course at Kapalua.
Justin Thomas picked up his 10th and 11th PGA TOUR victories this calendar year when he won the BMW Championship in August followed by THE CJ CUP @ NINE BRIDGES in October, respectively. The 26-year-old will make his fifth trip to Maui for the Sentry Tournament of Champions. In the 2017 edition, the Kentucky native led Japan’s Hideki Matsuyama by two shots entering the final round and became the fourth player in the previous seven editions of the event to parlay a 54-hole lead into a victory.
“It means I get to come back, which is even better,” said defending champion Xander Schauffele after he captured his fourth career PGA TOUR title at The Plantation Course at Kapalua. En route to victory, he tied the course record with an 11-under 62 in the final round. The 25-year-old started the final round five shots out of the lead and went on to make eight birdies and two eagles on his way to defeat Gary Woodland by one stroke. The 2020 event marks Schauffele’s third trip to Maui.
The 2015 Sentry Tournament of Champions winner Patrick Reed qualified for his return to Maui when he earned his seventh PGA TOUR victory at THE 2019 NORTHERN TRUST in August. The 29-year-old will make his sixth appearance at The Plantation Course at Kapalua. In his third start in 2015, Reed defeated Jimmy Walker on the first playoff hole, after a final-round 67 that saw him hole out for eagle on the par-4 16th.
Take in views of the winners-only field like a champion with a ticket to the Banyan Club, a new venue located just steps from the main fan entrance on the par-3 8th hole at The Plantation Course at Kapalua. This venue will offer exclusive seating around the 8th hole, as well as a tented area with a variety of seating and large TVs to show all the action in the world of sports.
Jawz Tacos will be featured in this venue exclusively, and fans purchasing this ticket (21 and over) will get several drink tickets to use in the venue. Fans won’t want to miss out on enjoying the golf action in an upgraded venue like the Banyan Club. Tickets are $90 for Thursday, $115 for Friday and Saturday and $125 for Sunday. To experience the Banyan Club, click here.
As a reminder to fans, general parking will be located at Mahana Estates this year which is just a five-minute shuttle ride to the course. General parking is available Wednesday, Jan. 1 through Sunday, Jan. 5 for $10 per day. Spectators will pay upon arrival to the general parking lot where both cash and credit card are accepted. Free tournament shuttles to The Plantation Course at Kapalua will drop off/pick up at the Main Entrance. The shuttle begins running one hour before gates open and will stop running 30 minutes after gates close.
ADVERTISEMENT