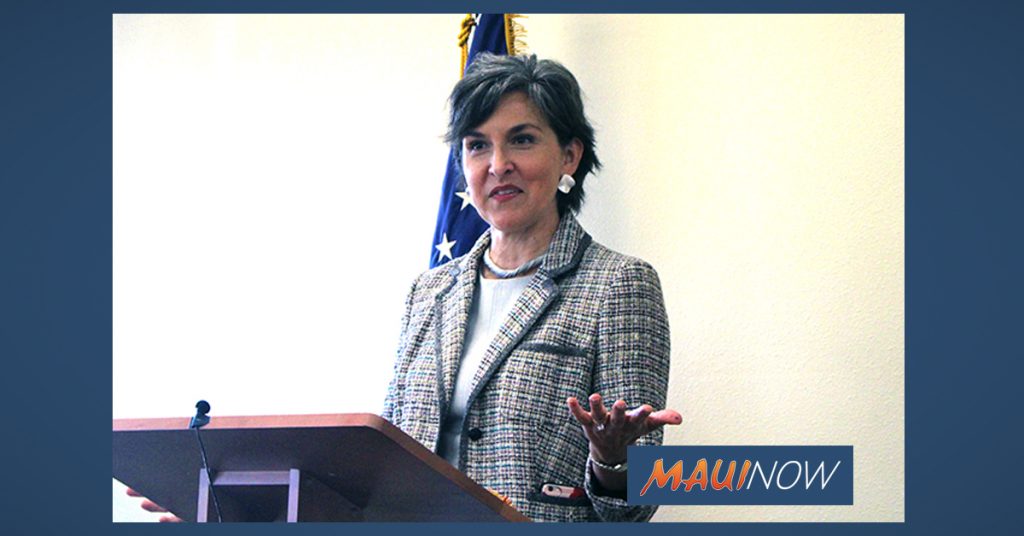 Deidre Tegarden returns to her previous post as executive director of the Nisei Veterans Memorial Center. It was a position she held prior to accepting a role as Chief of Staff for Maui Mayor Michael Victorino last year–which she resigned from effective Dec. 15, 2019.

A new Chief of Staff will be announced this afternoon.

Tegarden returns to the Nisei Veterans Memorial Center on Jan. 6, 2020 taking over for former State Sen. Jill Tokuda who will now serve as Director for External Relations for the Center.

Tokuda will be leading the charge on the NVMC’s upcoming capital campaign and further develop partnerships throughout Hawaiʻi and beyond.

Tegarden previously served as executive director of the nonprofit from 2016 to the end of 2018.

“It was a privilege and honor to serve the County of Maui over the last year, and I’m grateful to Mayor Victorino for giving me the opportunity work in his administration,” Tegarden said. “I’m sad to leave such a great team in the Office of the Mayor, but I am very excited to be returning to the Nisei Veterans. I continue to believe that these veterans can teach us many lessons on courage, loyalty and integrity – core values we need to encourage in our future generations.

“I also want to thank Jill Tokuda for her work in guiding the center and I know we will continue to partner with her as we move forward into exciting new ventures.”

The center’s mission is to “ignite human potential by inspiring people to find the hero in themselves through the legacy of the Nisei Veterans.” Many Maui nisei, or second-generation Japanese-Americans, fought heroically during World War II in Europe and the Pacific. The center was established to document for posterity the exploits of Maui nisei veterans and to offer their valor, values and sacrifice as lessons for others in the community.

“The NVMC Board of Directors is very pleased to have Deidre Tegarden at its helm again,” Nisei Veterans Memorial Center Board President Brian Moto said. “She is a person of foresight and imagination, a leader who contributes to our community and our nonprofit mission.”

Tegarden’s work includes serving as Chief of Protocol for Gov. Neil Abercrombie and Gov. David Ige as well as the point person for US-Japan Council’s State Prefecture meetings in 2012. She also served as Director of the Office of Economic Development , County of Maui under Mayor Charmaine Tavares and as the Executive Director for Big Brothers Big Sisters Maui.

She was a recipient of the Pacific Business News’ “Forty Under 40” Award, Past President of the Rotary Club of Kahului and a graduate of the Weinberg Fellows Program. She is a graduate of the University of Maryland with a Bachelor of Arts degree in Japanese and Chinese Studies.

In 2016 she made an unsuccessful run for State Representative for District 11, which includes Kīhei, Wailea, Mākena.  She lost in the Democratic Primary to Kaniela Ing.