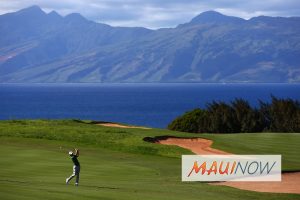 First-time PGA TOUR winners Collin Morikawa and Matthew Wolff have committed to play in the 2020 Sentry Tournament of Champions when the event returns to The Plantation Course at Kapalua from Jan. 1 to 5.
California native Collin Morikawa captured his first TOUR win at the Barracuda Championship when he birdied four of his last five holes at Montreux Golf and Country Club where the event employed the Modified Stableford scoring format. The 2020 event will mark the 22-year-old’s first appearance at the Sentry Tournament of Champions, but he’s played The Plantation Course before: “I played when I was really small, remember sitting on the wall, looking over [No.] 18. So, I’ve been there a lot of times. That places means a lot. It’s going to be very, very special to be back out there.”
Matthew Wolff collected his first career TOUR victory at the inaugural 3M Open at TPC Twin Cities when he drained a 26-foot eagle putt on the 72nd hole to defeat Bryson DeChambeau and Morikawa with a six-under 65, 21-under overall. The 20-year-old became the youngest TOUR winner since Jordan Spieth (2013 John Deere Classic). Wolff will make his first trip to Maui and the Sentry Tournament of Champions.
Other first-time TOUR winners during the 2019 calendar year joining Morikawa and Wolff at the Sentry Tournament of Champions include Dylan Frittelli (John Deere Clasic), Max Homa (Wells Fargo Championship), Nate Lashley (Rocket Mortgage Classic), Keith Mitchell (The Honda Classic), C.T. Pan (RBC Heritage) and Martin Trainer (Puerto Rico Open).
New at the Sentry Tournament of Champions, all grounds tickets and upgraded hospitality tickets will be distributed to fans digitally. All tickets can be purchased here. Also new this year is the Banyan Club, located just steps from the main fan entrance on the par-3 8th hole. This venue will offer exclusive seating around the 8th hole, as well as a tented area with a variety of seating and large TVs to show all the action in the world of sports. Jawz Tacos will be featured in this venue exclusively, and fans purchasing this ticket (21 and over) will get several drink tickets to use in the venue.
As a reminder to fans, general parking will be located at Mahana Estates this year which is just a five-minute shuttle ride to the course. General parking is available Wednesday, Jan. 1 through Sunday, Jan. 5 for $10 per day and spectators will pay upon arrival to the general parking lot. Free tournament shuttles to The Plantation Course at Kapalua will drop off/pick up at the Main Entrance. The shuttle begins running one hour before gates open and will stop running 30 minutes after gates close.
ADVERTISEMENT